By Chisaki Watanabe and Emi Urabe

As Elon Musk pushes out from his California base to make electric vehicles ubiquitous, a company halfway around the world and deep in the depths of the battery supply chain is riding his wake.

Tanaka Chemical Corp., which has a long history in developing battery materials, says it’s boosting output to meet surging demand for its materials for making cathodes. The Fukui, Japan-based company, which has slightly more than 180 employees, plans to invest 500 million yen ($4.54 million) to boost output capacity by about 1,000 tons a year.

While a relatively small investment, the new money flowing into battery components from Tanaka could be a precursor to even more spending from suppliers anticipating new electric car models on the road in the next three years, Mamoru Shimakawa, an executive officer at Tanaka, said in an interview.

“Supply is exceeding demand right now as many cathode material makers had invested to boost capacity around 2008,” Shimakawa said. “The industry will need more capital investment. We will keep considering capital investments in line with our business prospects.”

Tanaka Chemical, whose shares have risen about 93 percent since the beginning of the year, is representative of a group of Japanese companies whose fortunes have been lifted by the prospects for electric vehicles. Other beneficiaries making materials or components of lithium-ion batteries include Osaka-based Stella Chemifa Corp., which produces lithium salt, and Tokyo-based W-Scope Corp., which sells separators.

Stella Chemifa has risen 43 percent this year, while W-Scope is up 29 percent. Nippon Carbon Co., which makes artificial graphite electrodes, has gained 82 percent. Nippon Kodoshi Corp., a maker of electrical insulating paper for electrolytic capacitors and batteries, is up 163 percent. By comparison, the benchmark Topix index has gained about 5.9 percent in the same period. 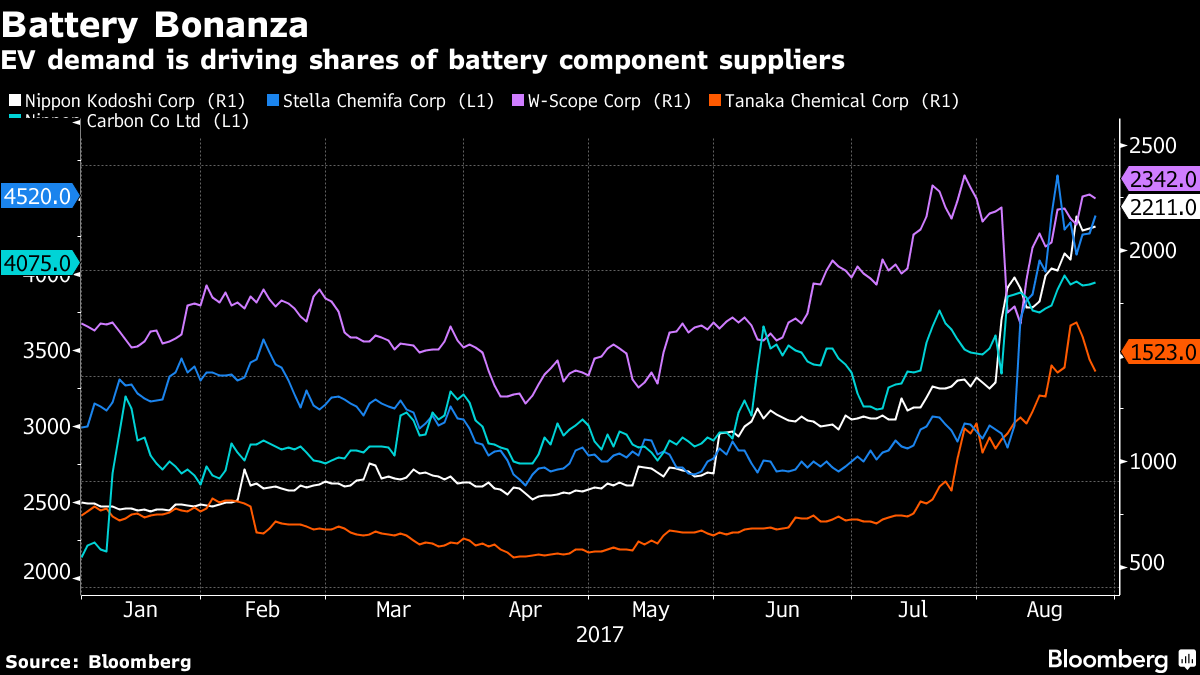 While lithium-ion batteries are found in everything from laptops and cell phones to digital cameras, it’s their primary role in electric vehicles like those produced by Musk’s Tesla Inc. that’s shaking up the supply chain.

That’s creating demand for the materials that go into lithium-ion batteries like lithium, cobalt, nickel and graphite. By 2030, demand for lithium just for use in batteries alone will be 172 percent of all lithium production in 2016, according to BNEF.

Other battery components such as anodes, separators and electrolyte are also in demand, boosting shares of makers from those products.

Tanaka Chemical’s products mix nickel and manganese with cobalt, a key ingredient whose price has soared over the last year.

“Japanese firms still lead in terms of advanced chemistry over Chinese counterparts,” said I-Chun Hsiao, a Tokyo-based analyst at BNEF. “Chinese firms have had to import or license technologies for wet separators and electrolyte additives, which they would like to stop doing as soon as possible.”

Chinese makers must also rely on Japan and Korea as sources of battery-manufacturing machinery, according to Hsiao. “This is another area in which there is a tech gap between Chinese and Japanese and Korean firms,” he said. 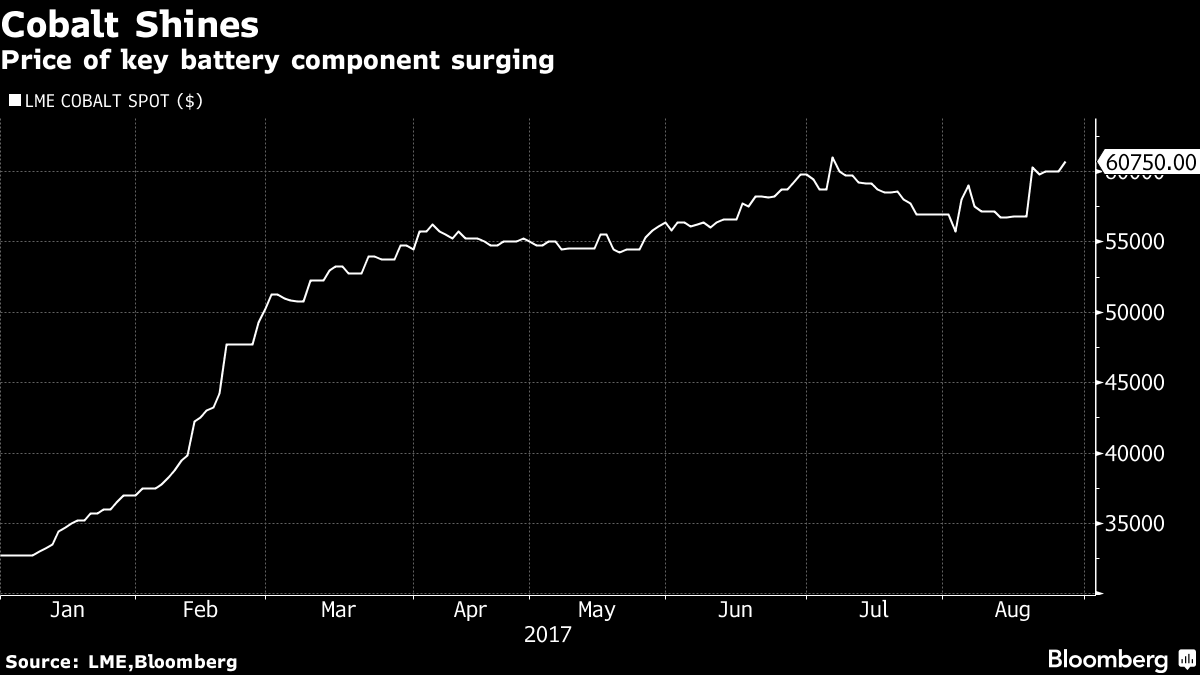 Tanaka Chemical’s progress tracks the development of batteries. The company, founded in 1957, began producing spherical nickel hydroxide for nickel-cadmium batteries in the 1980’s and shifted to cathode materials for nickel metal hydride batteries, which are used in hybrid vehicles produced by Toyota Motor Corp.

For the fiscal year ending in March, Tanaka Chemical is aiming to boost its sales of materials for lithium-ion and nickel metal hydride batteries to 16,000 tons from 13,000 tons the previous year, according to Shimakawa.

Tanaka Chemical’s strength is in its ability to provide materials suitable for different types of clean cars such as hybrids and plug-in hybrids — and not just battery electric vehicles, Shimakawa said.

“Our strategy is to customize our products for battery makers as different regions may require different types of clean cars and battery requirements will be different accordingly,” he said.