Investor support for the energy transition surged in 2020, but capital flows to less developed countries slowed as the pandemic raged on

London, December 14, 2021 – Despite a record-breaking year for energy transition investment in 2020, investors poured $67 billion fewer dollars into clean energy in emerging markets than they did into wealthier countries, a new study from research company BloombergNEF (BNEF) finds. The data suggests that investors retreated hastily from less developed markets to refocus on wealthier countries as the Covid-19 pandemic spread.

“Based on total funds deployed in 2020, enthusiasm for clean energy technologies appears to be at an all-time high,” said Luiza Demôro, head of energy transitions research at BNEF and lead author of Climatescope. “But investors’ willingness to invest in poorer parts of the world really seemed to stall in 2020 as the pandemic took hold.”

The Climatescope findings have been published following the COP26 climate talks in Glasgow during which governments representing wealthier countries reiterated their previous unfulfilled promise to provide $100 billion in financing to help less developed countries address the effects of climate change. Notably, Climatescope figures do not represent cross-border flows alone but all capital deployed in different jurisdictions, including the considerable volumes of capital raised and spent locally in countries such as mainland China and Brazil.

The surge in investment in wealthier nations can in part be explained by the explosive growth in electric vehicle adoption in western European nations and, to a lesser degree, in the U.S. In emerging markets other than mainland China, EV purchase rates have remained slow to date as such vehicles typically sell for a premium over conventional internal combustion engine vehicles. Governments in such nations rarely can afford to offer the types of subsidies consumers in wealthier nations receive.

The survey found that markets responsible for nearly two-thirds of global greenhouse-gas emissions have ‘net-zero’ targets in force, meaning they plan to achieve zero CO2 emissions by some future date. Policymakers in countries representing a further 27% are actively considering codifying such a pledge.

Far fewer nations have followed through with specific policies to achieve their long-term targets, however. The share of developing nations with reverse auction schemes for clean power delivery contracts or with feed-in tariffs in force has remained flat compared to 2019, for instance. Over the past three years, less than half the emerging markets surveyed had auctions in force, while around one-quarter had feed-in tariff mechanisms in place.

Mainland China topped the list of emerging markets with a composite score of 2.40 (out of a maximum possible score of 5.0). While the country maintains the world’s largest fleet of coal-fired power plants, it is also the largest supply and demand market for wind and solar. Additionally, the country has heavily promoted electric vehicle adoption with a number of supportive policies.

India ranked second with a score of 2.35. The country is the world’s largest market for renewables auctions, leading to substantial clean energy investment. Croatia finished third overall with 2.15. The nation has a target for renewables to account for 63.8% of electricity consumption in 2030.

Taking into account only power-related scores, India finished top of the table, followed by Chile and mainland China. Chile originally set a goal of having 20% of its electricity come from renewables by 2025, which it surpassed in 2020 with 25% clean generation. 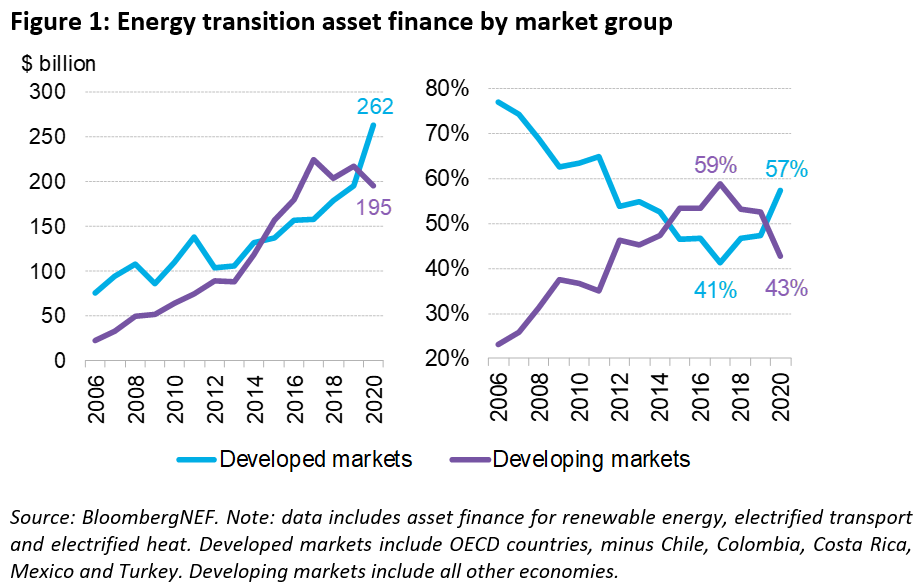 Now in its 10th year, Climatescope is an online tool that provides investors, policy-makers, and other researchers with a comprehensive view of energy transition market conditions in emerging markets, including local policy frameworks. For 2021, the project expanded its scope to evaluate activity not only in clean power, but in the decarbonization of the transportation and buildings sectors. Climatescope comprises detailed data on 136 markets globally, including 107 emerging markets and 29 developed nations.

Users can examine the country scores on multiple dimensions and make direct comparisons between countries on a variety of metrics on the Climatescope website.