In this scenario, the share of fossil fuels in the European energy mix falls 28% over 2021-2050. The biggest driver of reduced fossil fuel demand by 2030 is coal power generation, which drops with deteriorating economics. Coal primary energy use collapses 67% over 2021-2030.

Electric vehicles also help to lower oil use in the Economic Transition Scenario, with primary demand for oil in Europe falling 30% over 2021-2050 to 8.1 million barrels per day by 2050. European natural gas demand drops just 5% over the same period, a smaller reduction due to more limited economic alternatives to gas for heating in the building stock and a plateauing in gas-to-power demand reductions after 2030.

Nonetheless, fossil fuels play an important role in the European energy mix in the longer term in the Economic Transition Scenario. These fuels comprise 65% of primary energy in 2030 and 60% in 2050, compared to 69% in 2022. 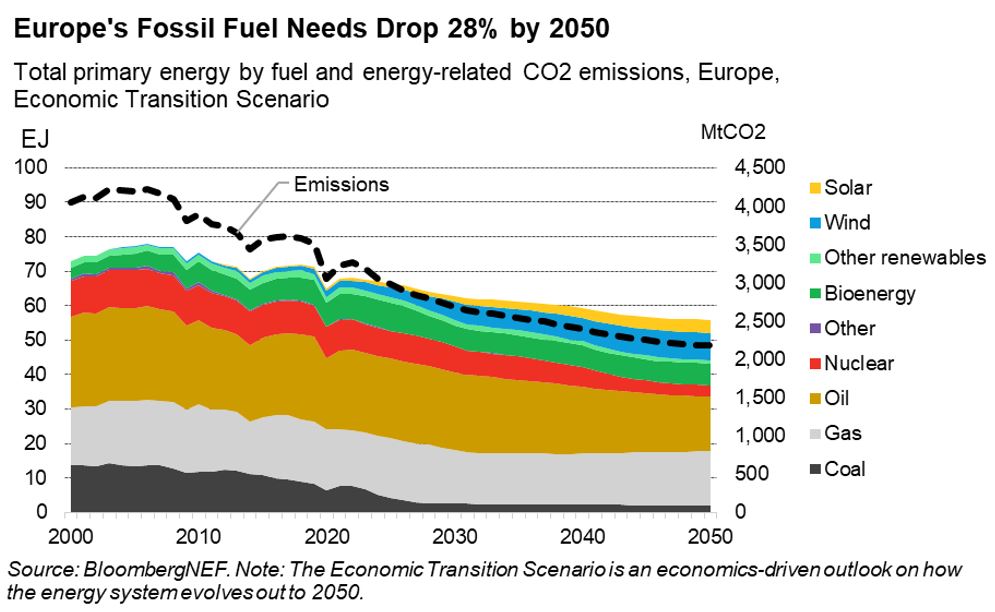 The Net Zero Scenario entails a rapid decline in oil and gas consumption in Europe in this decade. European oil demand falls more than half, to 9.5 million barrels per day and natural gas demand drops to 335 billion cubic meters by 2030 in the Net Zero Scenario. This is due to faster electrification of sectors using these fuels. This contrasts with the Economic Transition Scenario, where European oil demand falls just 0.4% from 2021 levels to 11.5 million barrels per day by 2030 and gas falls by 7% to 406 billion cubic meters in 2030. 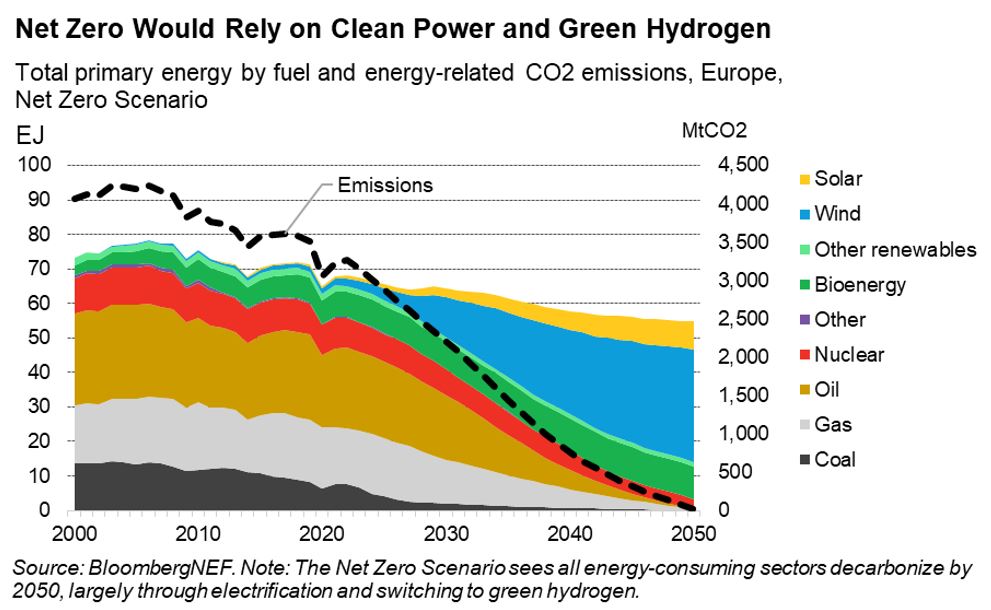 Electricity demand increases 82% over 2021-50 in the Net Zero Scenario, compared to 23% in the Economic Transition Scenario. Achieving this accelerated pace of electrification would require strengthened measures to support adoption of electric vehicles and heat pumps, as well as electrified industrial processes. 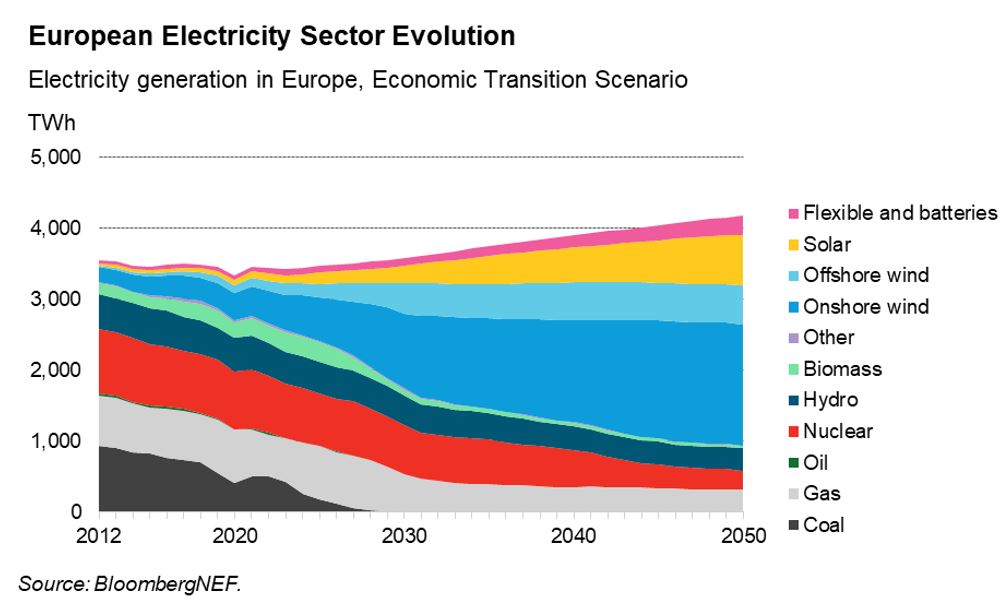 Increasingly competitive wind and solar boost their share of supply to 48% by 2030 in the Economic Transition Scenario, up from 18% in 2021. Supported by battery storage, these technologies squeeze gas out of the electricity mix, with gas generation dropping by 31% over 2022-30.

Europe builds 38% more wind and solar for power generation by 2050 in the Net Zero Scenario compared to the Economic Transition Scenario. To reach these volumes, solar and especially onshore wind capacity additions need to grow above the industry’s historical rate this decade. Over 2021-2025 alone, deployments in both scenarios need to double compared to 2016-2020, increasing a further 60-80% over 2026-2030. 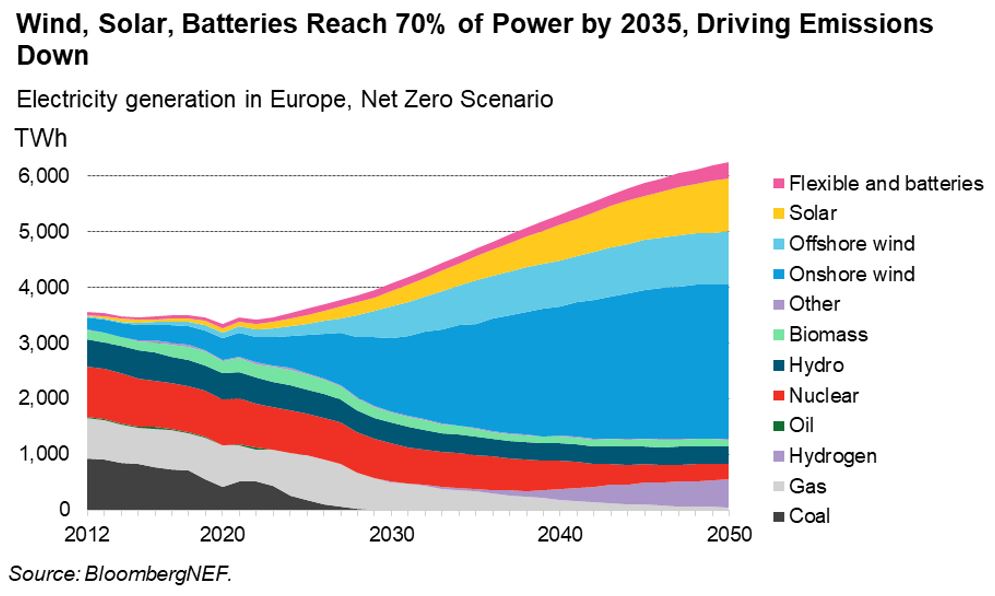 Gas generation plateaus at about 10% of the mix in the Economic Transition Scenario, as wind and solar reach their economic limits. In the Net Zero Scenario, there is a short-lived role for natural gas in power generation before green hydrogen becomes the main source of dispatchable capacity to back up the grid during lulls in wind and solar output.

Europe installs 531 gigawatts of hydrogen-capable gas turbines by 2050 in the Net Zero Scenario. To achieve this, most new gas plants built in Europe going forward need to be hydrogen-compatible. Converting existing gas plants to burn hydrogen is also an option.

Green hydrogen: 1 terawatt of electrolyzers by 2050

Deep decarbonization of the European economy in BNEF’s Net Zero Scenario relies on both electrification and adoption of green hydrogen. Together, these two solutions enable emissions to fall faster in the 2030s than historical rates.

Green hydrogen can deliver emissions reductions in the hard-to-abate sectors, where electrification is difficult. In our Net Zero Scenario, European green hydrogen demand amounts to 96 million metric tons per year by 2050, supporting decarbonization of heavy industry and dispatchable power, among other end uses.

A green hydrogen economy in Europe would require the development of hydrogen-ready infrastructure, including transportation and storage, and assets to use the hydrogen. It would also require an additional 1.2-1.5 terawatts of wind and solar build in the Net Zero Scenario. This capacity is dedicated to supplying over 1 terawatt of electrolyzers by 2050. 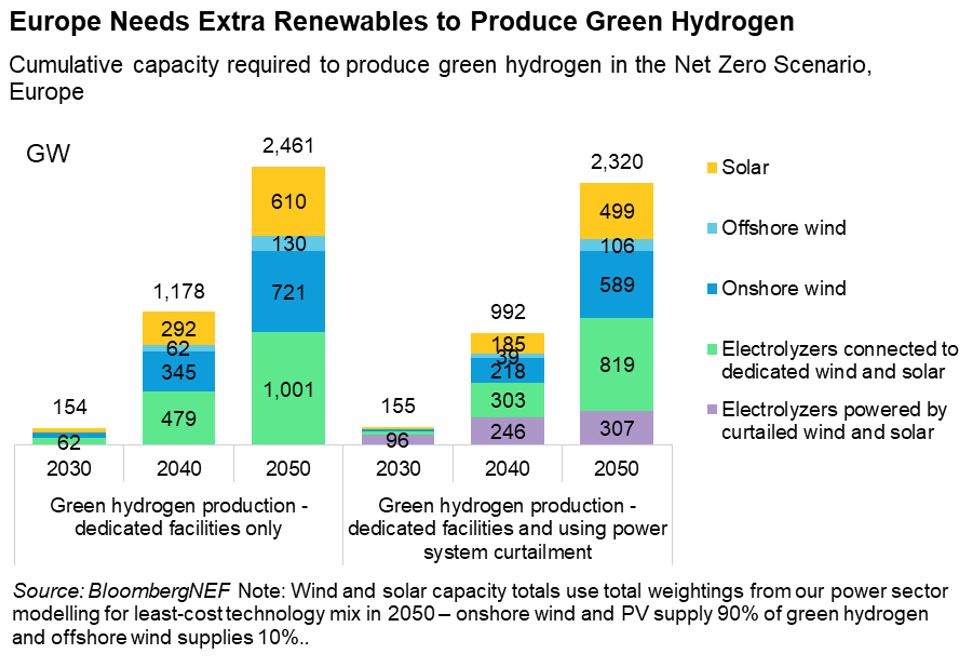 The Net Zero Scenario relies on the scale-up of additional renewable energy capacity to deliver on a green hydrogen economy. If Europe builds dedicated wind, solar and electrolysis capacity, separately from the power system, the region will need 1 terawatt of electrolyzer capacity and 1.5 terawatts of additional wind and solar.

By 2050, a total of 3.9 terawatts of renewable energy capacity supply clean power and green hydrogen in Europe in the Net Zero Scenario, along with 1 terawatt of electrolyzers. Deploying this volume of capacity will rely on robust investment signals to the energy industry. 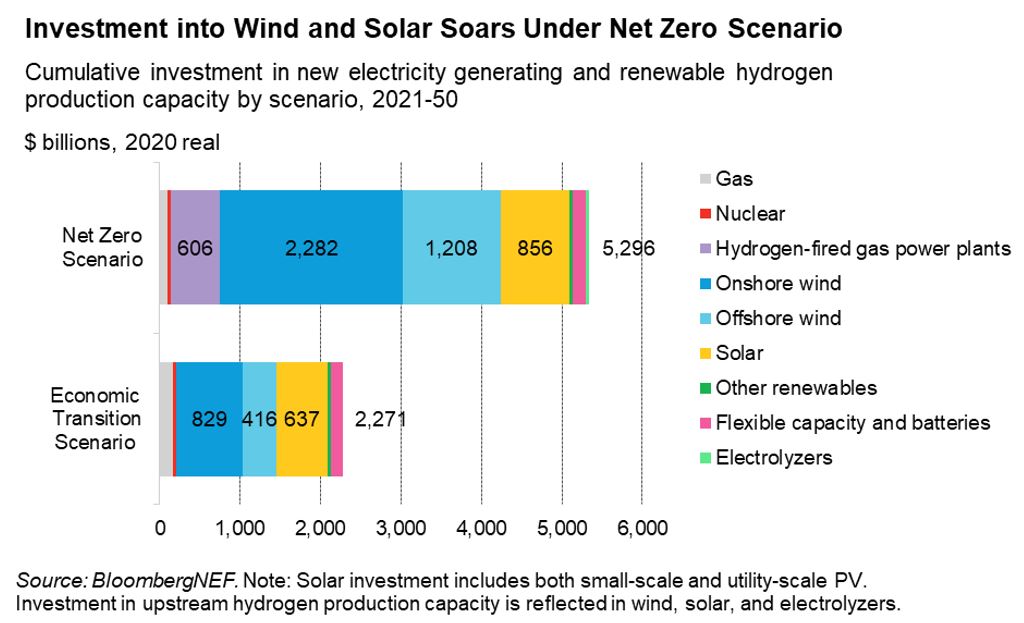 The delivery of clean hydrogen production assets in Europe creates an opportunity for $1.5 trillion cumulative investment over 2021-50 in the Net Zero Scenario.

BNEF subscribers can find the full European Energy Transition Outlook 2022 report on the client website and on the Bloomberg Terminal.