EV Drivers Save Big When They Charge Smart

Drivers of battery-electric vehicles are more than able to move charging times to suit the grid and in doing so can save over $1,000 annually on charging costs compared to gas fueling. This is according to data from more than one million home charging sessions provided by ev.energy.

The power consumption of some battery-electric vehicles can be as much as some homes, with data showing vehicles with larger batteries consume more energy and drive further than those with smaller batteries. Indeed, Tesla models are estimated to drive further annually than the average gas vehicle in the U.K., and close to the annual distance of gas vehicles in the U.S. Electric vehicles are therefore proven to not limit total distance traveled.

The average battery-electric vehicle driver in the dataset charges at home every 3.6 days, plugging in for more than 12 hours but only charging for 2.5 hours. This provides plenty of opportunity to move the time of charging to times to when power prices are low. That typically falls between 7pm and before 7am in the U.K., but can also occur in the middle of the day in places like California where solar generation is high. Companies such as ev.energy, Enel X and ChargePoint are providing platforms to automatically schedule charging for EV drivers.

Moving charging times also reduces peak load on the electricity grid and the need for upgrades. Ev.energy has shown that it can reduce the load by 1.5kW per EV in response to demand-response events in Texas. 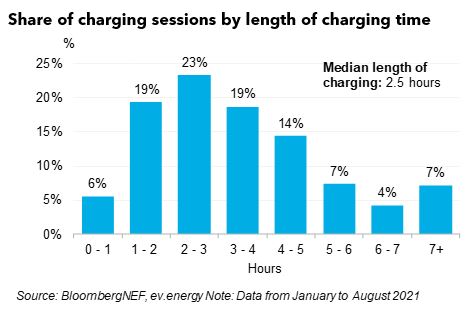 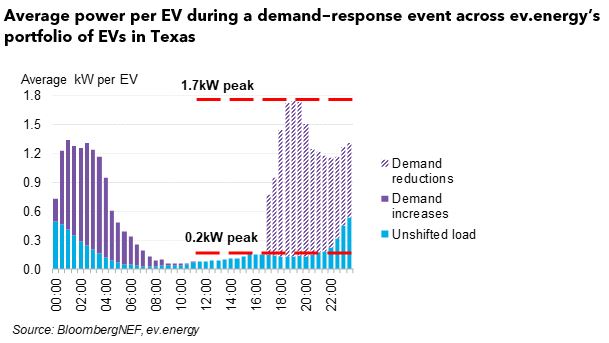 Off-peak tariffs can save drivers more than $1,000 annually

Some utilities such as Octopus Energy, Electricite de France and Southern California Edison are providing specialist tariffs to EV drivers for low-price electricity at off-peak times. The tariffs better align the costs of electricity with demand and supply, helping to limit investment in the electricity system.

Off-peak electricity tariffs provide driver savings of more than $1,000 annually compared to fueling with gasoline, but can also produce savings of around $200 in the U.S. and $360 in the U.K., when compared with standard fixed electricity tariffs. California is, however, in the process of moving all residential customers to time-of-use tariffs. The region has some of the biggest differences in peak and off-peak residential electricity rates in the world. A customer on a time-of-use tariff in California could save an estimated $600 per year charging an EV at off-peak times compared to peak times. 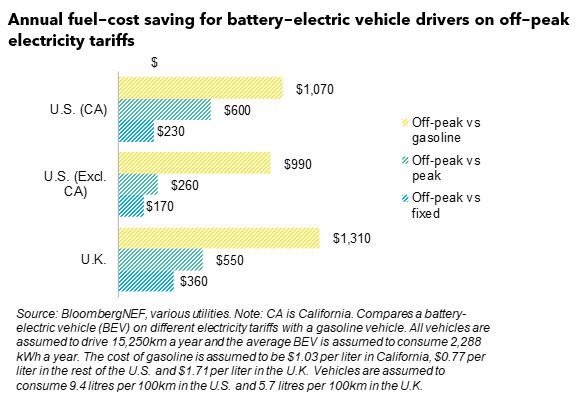 The average battery-electric vehicle in the dataset consumed 2,300kWh annually and completed an estimated 15,250 kilometers a year. This compares to an average annual travel distance for all cars of 12,160 km in the U.K. and 21,600 km in the U.S. Vehicles with larger batteries, like the Tesla Model X, S and 3, drove further than vehicles with smaller batteries. Those with batteries of less than 50kWh in capacity drove around 8,140 km a year. 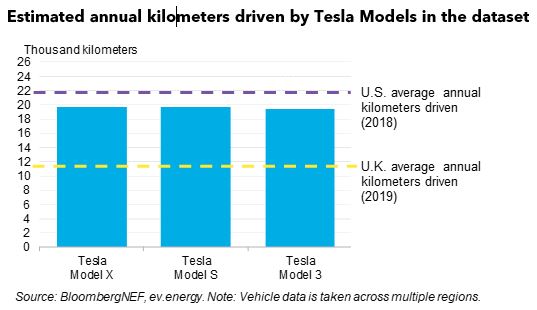