Even at $25 Billion, Southern Sees Value in Finishing Nukes

Southern Co. still sees benefits in finishing two long-delayed, over-budget nuclear reactors in Georgia, even as new cost estimates show the overall price tag of the project has swelled to at least $25 billion.

Southern Chief Executive Officer Tom Fanning stressed that, while the U.S. utility owner is still deciding the fate of the Vogtle nuclear project, dropping it altogether would leave the company with “nothing to show” for its investment. Southern, which owns a 46 percent stake in the reactors, would have to shoulder at least $11.5 billion in costs alone, including financing expenses, to finish the plant by February 2022, company estimates released Wednesday show. That excludes $1.7 billion that Southern’s slated to get after the project’s contractor, Westinghouse Electric, went bankrupt. 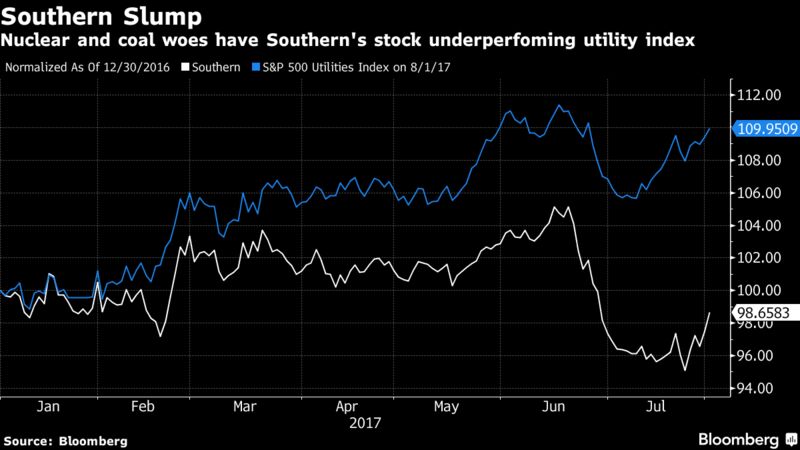 Southern and its utility partners expect to reach a decision on Vogtle this month, and file a recommendation with Georgia regulators, Fanning said.

“It might be a close call,” Kit Konolige, a New York-based utility analyst for Bloomberg Intelligence, said by phone. “The biggest issue is, what’s your level of confidence that if you do go ahead, it’s going to be done on time and on budget.”

The economics of both the nuclear and coal projects were undermined by cheap natural gas flowing out of U.S. shale formations and a surge in renewables that have dragged electricity prices to record lows. For the first time in more than 30 years, America’s reactors have fallen behind wind farms, solar panels and other renewable energy suppliers as a source of electricity.

“This thing is in our national security interest,” said Fanning, adding that he’s worked closely with members of the Trump administration on the project. Ceding the market for new reactors to Russia and China, “is something we all should consider,” he said.

“Just putting some boundaries” around what Vogtle could cost them encourages investors, Konolige said. “It’s a big number, but in the context of a very big company like Southern, not necessarily a massive problem.”

The effect of Scana’s decision to cancel its nuclear project on Vogtle is “mixed,” Fanning said.  Layoffs from the South Carolina project mean Southern may have an easier time finding skilled laborers to work on the Vogtle reactors, he said.

“All the major components are either erected or on site, so the major equipment is essentially done,” Fanning said of the Vogtle project. Remaining work consists of buying and installing gear that’s priced as a commodity, such as power cables. “So it’s a labor-management and commodity issue.”