The drop in passenger electric vehicle sales in China last month and stagnating sales for the remainder of the third quarter are likely only a temporary blip for the world’s largest EV market, according to a report from BloombergNEF.

Growth is expected to recover in the fourth quarter, buoyed by new models and consumers rushing to buy in order to lock in subsidies that could be cut in 2020, BNEF said. Government measures could also help.

“EV sales could gain later this year or next year if central or local governments launch new policy measures,” BNEF said in the report following the release of figures showing that passenger EV sales fell in July for the first time in 30 months.

Clients can read the report on The Terminal or on web. 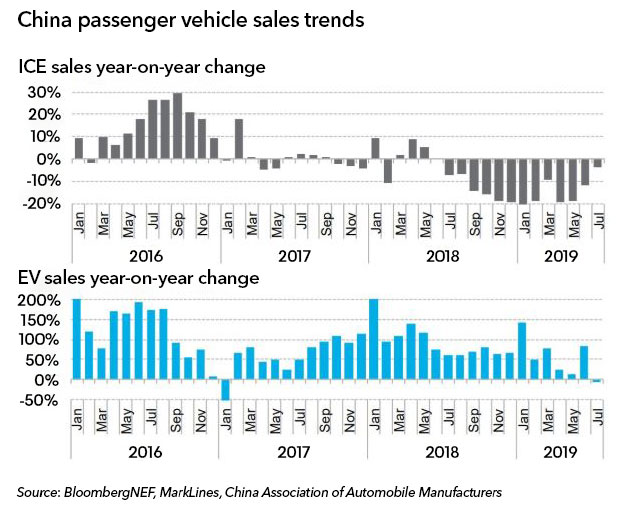 EV sales last month dropped almost 7% compared with the same month a year ago and 51% from June, BNEF said, prompting it to lower its forecast for 2019 by 6% to 1.5 million units.

BNEF attributed July’s drop to a number of reasons, including a continued slowdown in new vehicle sales in China, discounts on internal combustion engine vehicles and a reduction in subsidies on electric vehicles.

July’s drop came off a particularly strong month in June when passenger EV sales surged to 137,000 units, accounting for a record 7.9% share of new car sales.

The surge in June came after China said in March that it would make changes to its new energy vehicle program, including a reduction in national subsidies and the removal of local incentives. The changes took effect on June 26.