For decades, Mexico’s electricity industry was run by a single entity. The Comisión Federal de Electricidad (CFE) owned and operated all power plants. Across the country, there were no wholesale transactions and therefore no wholesale prices – just retail electricity rates, set by CFE.

Mexico deregulated its power market in 2016, which instantly introduced competition between power plants and with it, wholesale power prices, which now ‘float’ according to power plant economics. Every hour, wholesale prices essentially measure the short-run marginal cost of running the grid. Prices have been particularly high – and volatile – by North American standards. (Wholesale power prices in Mexico are two to three times higher than U.S. counterparts.)

Foreign and domestic investors are eyeing opportunities to undercut the high costs of incumbent generators. 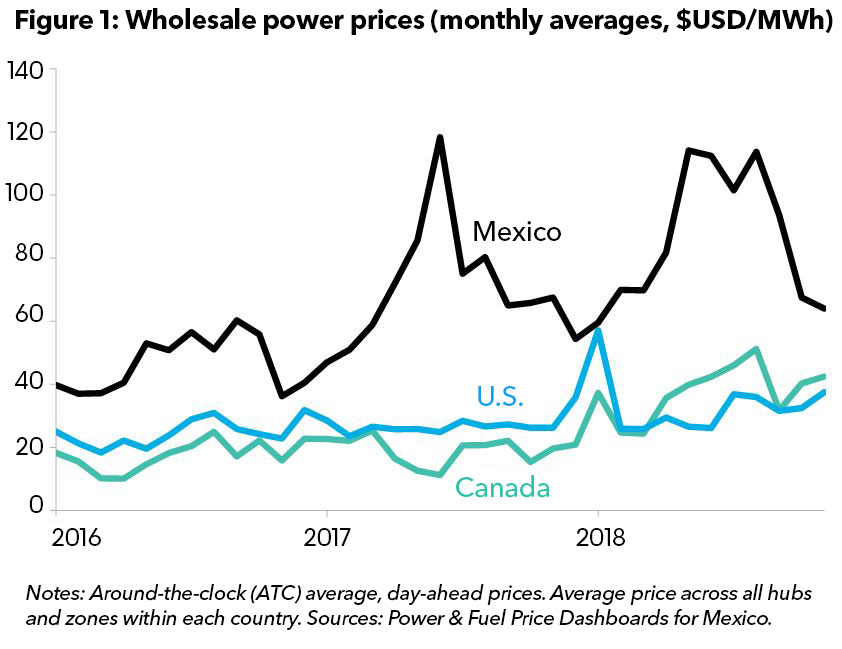 Mexico’s power grid still relies on inefficient power plants that burn expensive fuel. There is a tremendous opportunity for investment in new power plants and infrastructure – particularly that which grants Mexico access to cheaper fuel. State economists believe the private sector will need to invest $89bn in Mexico’s power generation resources by 2031.

If power and fuel prices remain at 2018 levels, making money on these investments will be easy. But there is a paradox inherent in new, more efficient power plants with lower costs of generation: the investments themselves are likely to suppress prices, stunting revenues and closing arbitrage opportunities.

There are a handful of factors which will influence returns for power plants in Mexico:

For example, right now Mexico is importing liquefied natural gas (LNG) from the U.S. and burning expensive fuel oil. Both of these options cost close to $10 per million british thermal units (MMBtu). Meanwhile, just north of the border, in West Texas, Permian Basin frackers are flaring natural gas or selling it at firesale prices, for $1/MMBtu at Waha Hub.

The difference in fuel prices between Mexico and Texas exists because there are not enough pipelines connecting the two locations. Companies like Enbridge and Energy Transfer Partners are laying new pipes to send more gas to Mexico, with some important legs scheduled for completion in 2019.

Expanded access to cheap natural gas could cause Mexico power and gas prices to converge towards U.S. levels. This will happen once power plants in Mexico break away from expensive oil- and LNG-linked fuel contracts (red and blue prices in Figure 2), in favor of cheaper natural gas imported via pipeline (closer to purple). 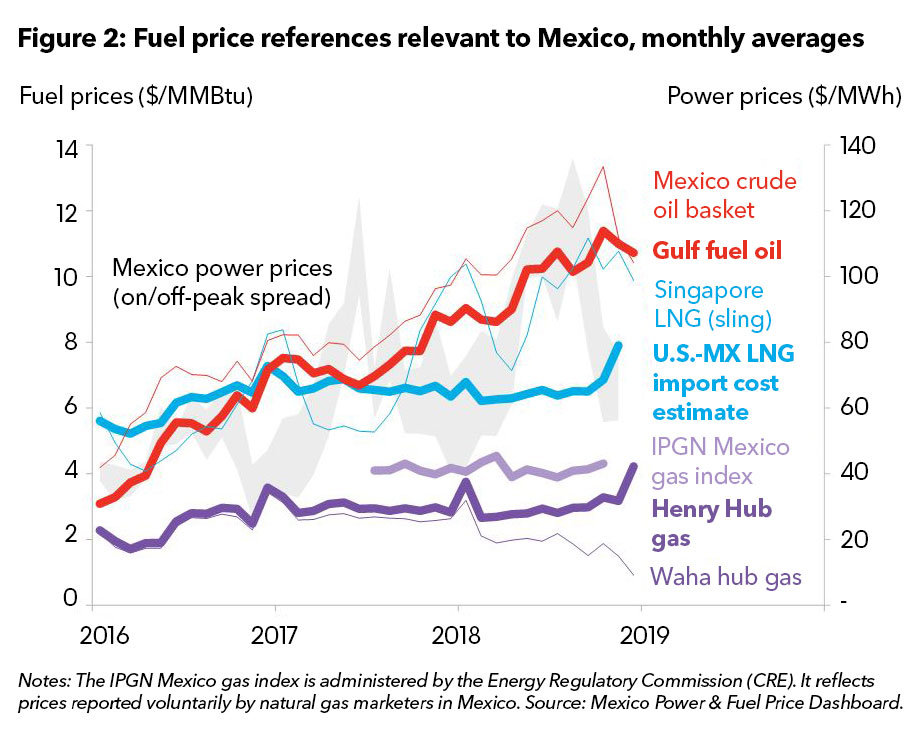 Power and infrastructure investors can have global portfolios, but they must analyze power plant economics on a local scale. Power prices tick a dozen times every hour at thousands of individual nodes – the physical settlement points for power plants. Each tick reflects local conditions on the grid and sends a signal to investors. BloombergNEF’s Power & Fuel Price Dashboard (web | Terminal) tracks every price movement in Mexico.

For more details on the dynamics governing power prices in Mexico, clients can access our November 2018 Research Report: Mexico Power Prices Prone to Eruption, Eventual Collapse on the web or Terminal.