A nascent recovery in the beaten-down mineral-exploration industry is gaining momentum as metal prices trade at multi-year highs.

Global drilling rose for a fifth straight quarter in April to June and numbers through early August suggest the recovery is accelerating, according to data compiled by S&P Global Market Intelligence. While budgets are still way off levels at the peak of the super-cycle and aren’t evenly spread over regions or minerals, the numbers show an industry that’s starting to get back on its feet. 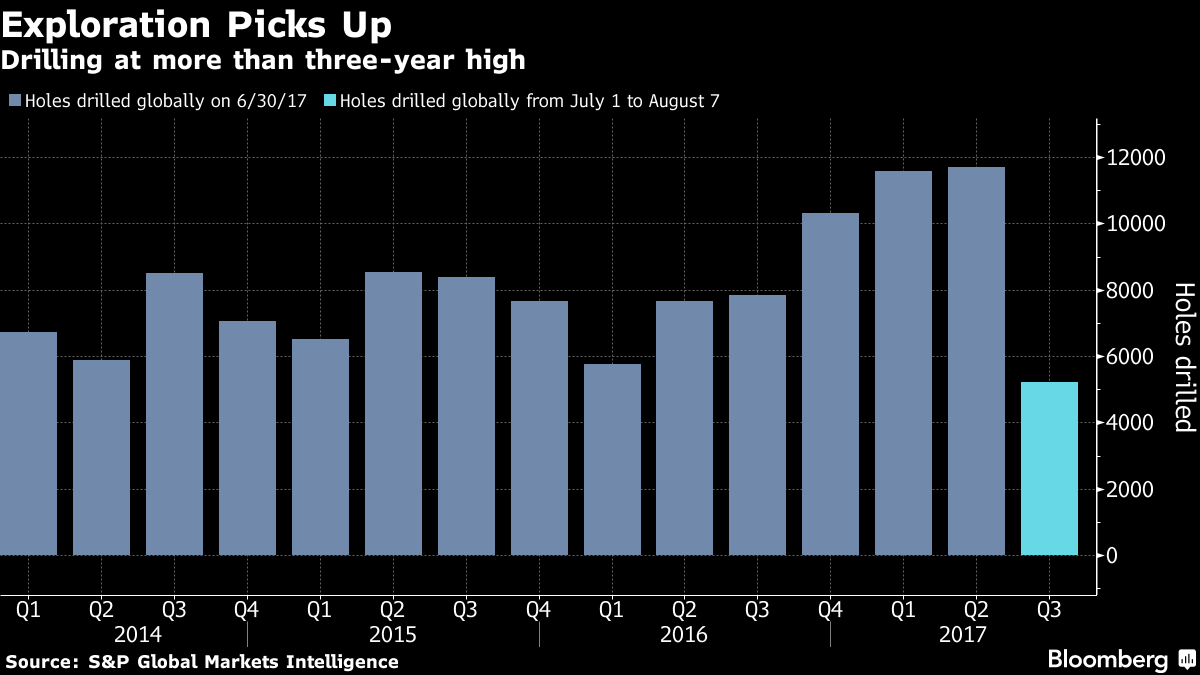 There are hot spots — like lithium in Argentina and copper and gold in Ecuador. But Chile, a mature mining country with falling ore grades and relatively high production costs, is also seeing gains.

“Activity has picked up over the last two months,” said Ronald Ambler, the chief executive officer of AC Perforaciones SA, which had been operating at 10 percent of capacity during the worst of the slump. It’s now at 30 percent to 40 percent and bidding for contracts with four large copper producers. “Companies are starting to get out there to explore again.”

Companies that cut spending to defend margins in the downturn are now starting to loosen their exploration purse strings after industrial metals such as copper and lead rallied more than 30 percent in the past year. 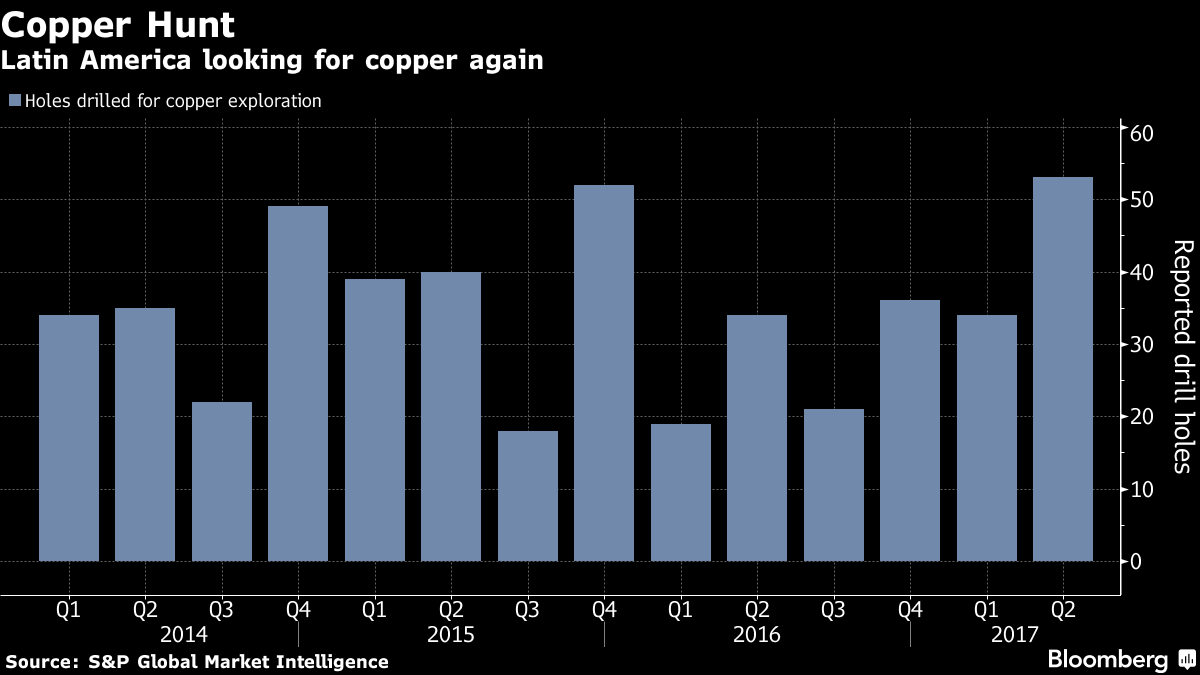 This week, the LMEX base metals index hit the highest level since November 2014 as the outlook for Chinese demand improves and years of spending cuts keep supply in check. Prices of gold and silver have fallen in the past year as rising interest rates erode the appeal of owning precious metals.

In Latin America — where Chile and Peru alone account for 40 percent of the world’s copper reserves — the number of holes drilled in copper exploration programs last quarter was the highest in at least three years, S&P Global Market Intelligence data show. Chilean regulator Sernageomin notes an increase in gold and silver exploration spending in the central region, while copper-drilling campaigns are also resuming further north.

That’s putting people in the industry back to work.

Geologist Jorge Brantt found a job at Chile’s state-owned Enami three months ago after being unemployed for a year and a half.

“Things are moving, even if they’re not taking off yet,” Brantt said in a telephone interview. “While they still don’t dare to do large campaigns like they used to, some companies are starting to drill and resume small projects that had been halted for years.” 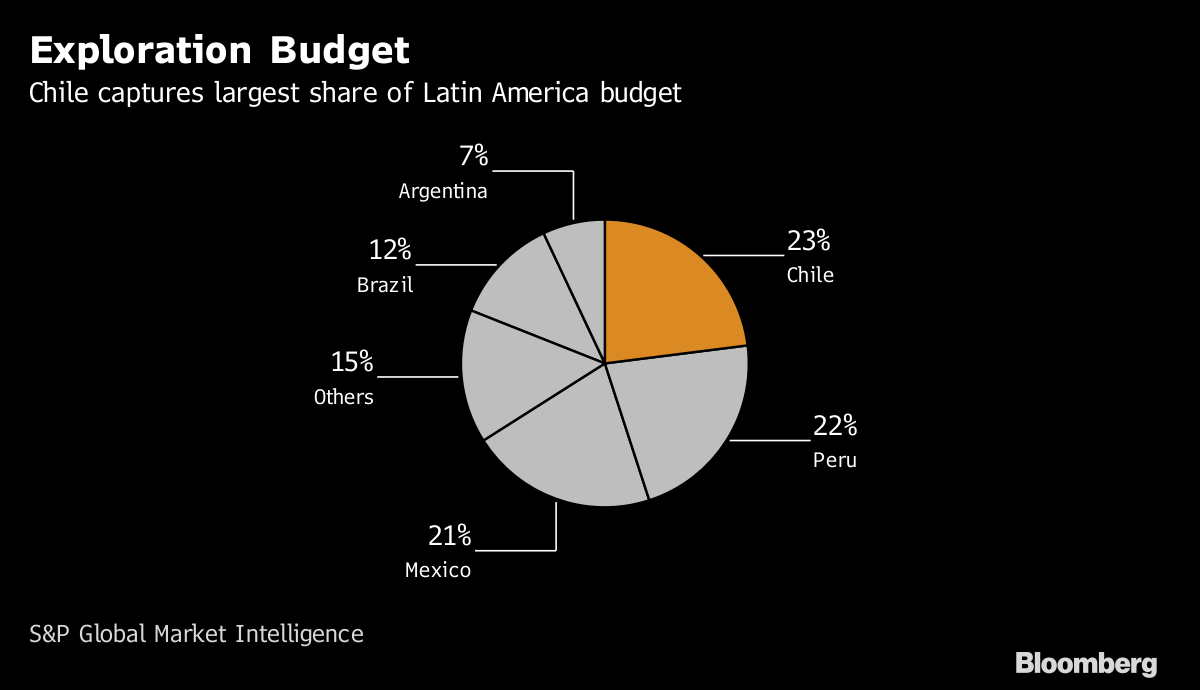 “Five years ago, you called a drilling company and you had to wait a year to drill a hole anywhere in Chile,” Brantt said. “Now the availability is immediate and competition to get the few projects out there is fierce, so prices are looking more attractive as well.”