First Solar Bets Its Future on a New Panel

First Solar Inc. is poised to take the wraps off the Series 6 panel Tuesday, a long-awaited product rollout that has huge implications for the biggest U.S. solar manufacturer.

It’s not a stretch to say that Tempe, Arizona-based First Solar has bet its future on the success of this product. As solar panels get cheaper and cheaper, and global demand continues to swell, production costs have become key to competing against other companies, especially in Asia where most of the world’s panels are produced.

First Solar has “become a pure widget manufacturer and they need to compete exclusively on cost,” said Pavel Molchanov, an analyst at Raymond James Financial Inc. “It’s a risky bet. They need to show a cost road map that keeps them ahead of China.”

While the Series 6 won’t be available until early next year, the initial signs are good. Here are a few things to look for:

First Solar’s new panel is about three times this size of its predecessor. The current workhorse, the Series 4, converts about 17 percent of the energy in sunlight into electricity, and the company has said the new model will be better, though it hasn’t given a specific number. Those are some of the reasons the company expects each Series 6 panel to deliver about 420 watts, more than triple the 122 watts from the Series 4.

Analysts expect the company’s manufacturing costs to come down to about 25 cents a watt, after the company hits full production in about a year.

Back in 2016, the company was preparing to introduce a new product, the Series 5. It was supposed to come out this year, and would serve as a placeholder until 2018 when the Series 6 would be ready. In November 2016, newly installed Chief Executive Officer Mark Widmar announced a major strategic shift, pulling the plug on the Series 5 to focus instead on the Series 6.

The goal was to reduce costs as quickly as possible. It also meant that the company would be selling an outdated product this year as it worked to get the new model ready. In a year when Bloomberg New Energy Finance expects global solar installations to increase 16 percent, First Solar is forecasting sales to gain no more than 5 percent.

First Solar signed a record 4.5 gigawatts of new orders in the third quarter, giving it a backlog of more of 7.4 gigawatts. That’s almost triple what the company produced in the year through September, and will account for much of the panels it expects to produce into 2020. Strong demand for the Series 6 may prompt Widmar to ramp up Series 6 production faster.

But First Solar uses a different technology and its products made in other countries will be exempted. That’s increased demand this year for the company and driven up panel prices across the industry as developers seek to stockpile inventory. First Solar shares have more than doubled since the case was filed.

The trade issues, coupled with product rollout, will help First Solar maintain prices of 35 cents to 40 cents a watt over the next few years, according to Goldman Sachs Group Inc. analyst Brian Lee. And with costs coming down, that will boost earnings, and he raised his share-price target to $65 from $50 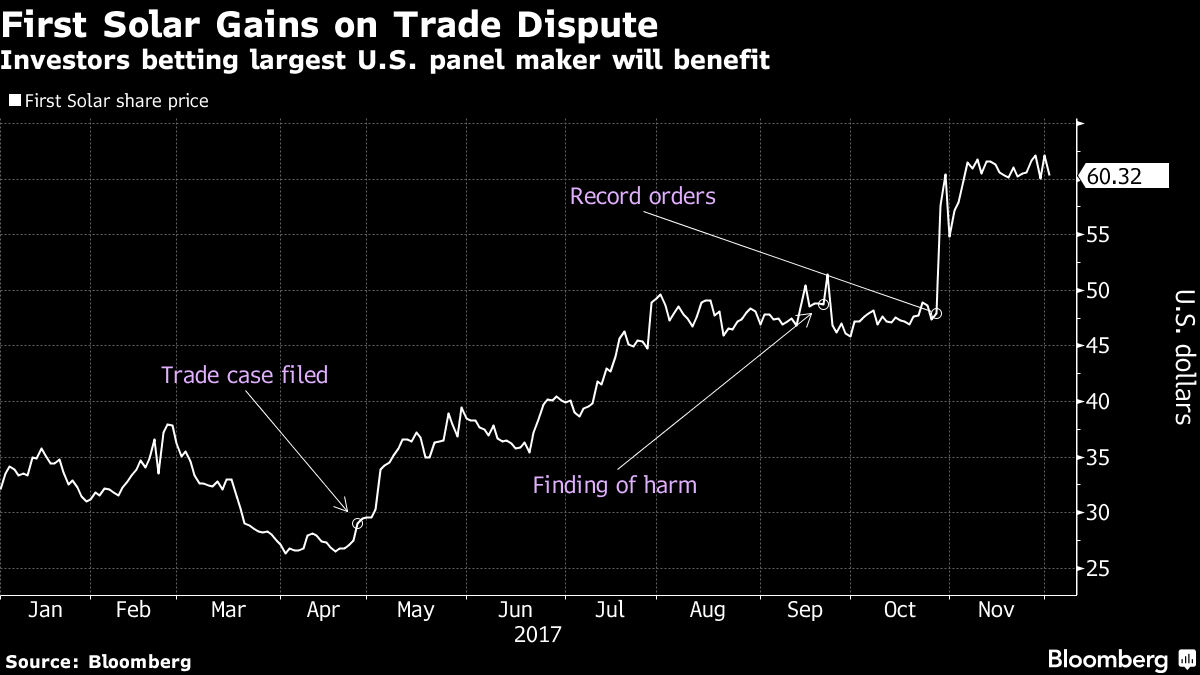