The tax overhaul proposed in the U.S. House is a better bet for oil and gas companies than solar developers or electric car buyers, keeping with President Donald Trump’s decidedly fossil-fuel friendly views.

The proposal, unveiled Thursday, slashes tax rates almost in half for most corporations, and expands the ability of businesses — from shale drillers to solar panel makers — to write off equipment. It keeps most of the oil industry’s most cherished tax breaks intact, as well as investment and production tax credits for renewable energy.

But there are exceptions: A $7,500 credit for electric vehicle purchases is gone, as is a credit for big solar and geothermal projects. Those changes, alongside other tweaks, may make it harder for renewables to attract financing.

“Keep in mind this is just the first salvo in the tax reform fight,” said John Marciano, a Washington-based attorney at Akin Gump Strauss Hauer & Feld LLP, in an email. “This isn’t anywhere close to finished.”

It’s possible the bill could change as quickly as this weekend. Representative Kevin Brady, the Texas Republican who chairs the Ways and Means Committee, has indicated he may rewrite the bill ahead of a Monday committee vote, where amendments making further changes could be adopted.

But so far, here’s what we know about what the bill means for energy:

The House proposal protects three provisions that save explorers billions of dollars annually, while chopping a few others.

The legislation preserves the use of the so-called last-in-first-out provision, also known as LIFO. These special accounting rules let companies value crude stockpiles at the price they’re selling for, rather than the original purchase cost. The bill also allows continued deductions of so-called intangible drilling costs and preserves a measure that lets explorers reduce taxable income to reflect the depreciation of reserves.

All three were thought to be in jeopardy as Republicans searched for offsets to pay for lowering taxes elsewhere. Eliminating the drilling and depletion provisions alone would force energy companies to pay about $25 billion in additional taxes between 2016 and 2026, Congress’s Joint Committee on Taxation estimated last year.

While keeping two major credits for wind and solar, the bill would cut the benefit from the wind provision by a third, and wipe out another 10 percent tax credit for commercial-scale solar and geothermal projects after 2027.

While the plan adds credits for other energy sources, such as geothermal, small-scale wind and fuel cells, the overall impact is negative, said Greg Jenner, a Washington-based attorney at Stoel Rives LLP who works with renewable companies. “That’s just a pure revenue grab,” Jenner said in an email.

A lower corporate tax rate could actually deplete the supply of tax equity, an esoteric but critical type of financing that often accounts for half the cost or more of wind and solar projects. In tax-equity deals, clean-energy developers sell portions of their projects’ tax credits to corporations — often banks and insurance companies — that can apply the credits to their own tax bills. Lower corporate rates could mean that some investors need fewer write-offs.

The proposal also eliminates a $7,500 per vehicle credit for electric cars like those made by Tesla Inc. and General Motors Co. Tesla ended the day down 6.8 percent in New York trading.

Some of the cuts may face a rocky road even among Republicans. U.S. Senator Chuck Grassley, an Iowa Republican whose state is a hub for wind power, said the wind credit is already being phased out under a compromise negotiated in 2015. The issue “shouldn’t be reopened,” Grassley said in a statement.

Grassley promised to use his seat on the Senate Finance Committee “to see that the commitment made to a multiyear phase out remains intact.”

The plan maintains the deduction for interest expenses that utilities see as critical, given the billions of dollars of debt the industry racks up to pay for new power plants and transmission lines. Losing the deduction would bruise earnings, even with a cut in the corporate tax rate, the power industry has argued.

A faster depreciation of expenses, as the bill proposes, would also be a boon for the sector, said Kit Konolige, a New York-based analyst for Bloomberg Intelligence. “In general, they’re very large spenders on capital equipment so anything that improves their tax situation based on how much capital spending they do would certainly tend to be positive,” Konolige said.

The tax measure also includes an extension of an estimated $6 billion in tax credits for nuclear power, which may assist Southern Co. Without that extension, nuclear plants would have had to be operational before 2021 to qualify. 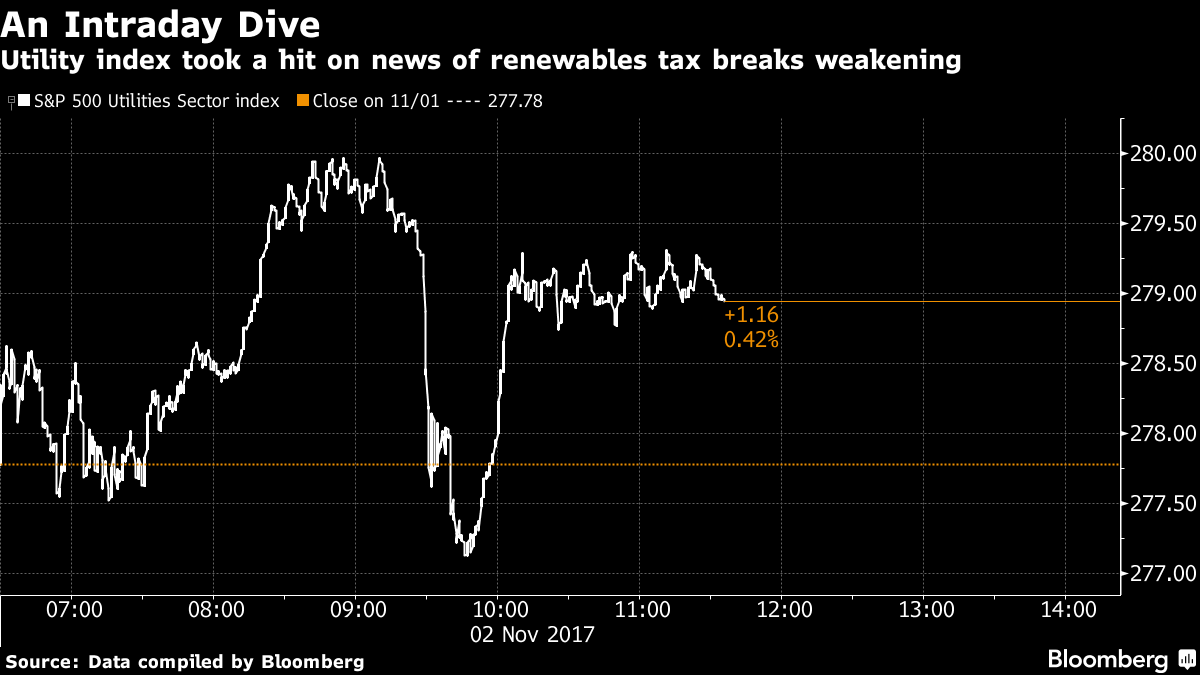 The S&P 500 utilities index did plunge briefly on news of the weaker tax breaks for renewables, with clean energy-heavy NextEra Energy Inc. taking a hit. The index has since recovered and closed 0.4 percent higher for the day. NextEra lost 2.3 percent.

The bill looks like a “mild positive” for master-limited partnerships, the tax-favored entities often formed to operate pipelines and other energy infrastructure. They would gain from an enhanced ability to expense capital investments, said Jay Hatfield, a New York-based portfolio manager at the InfraCap MLP exchange-traded fund.

Those held through corporate entities would see a “big benefit” from the 20 percent corporate tax rate, he said.