By Robert Tuttle and Kevin Orland

After starting the year at a torrid pace, the explorers of Canada’s shale riches are taking a step back, much like their peers in the Permian Basin south of the border.

As oil’s rebound stalls and tight-rock operations in Alberta and British Columbia gush enough crude and natural gas to meet targets for the year, producers like Painted Pony Energy Ltd. and Baytex Energy Corp. may be putting the brakes on a spending spree that saw drilling in the first half more than double to over 3,000 wells.

They’re still on pace to invest, drill and produce a lot more than last year, but as it sinks in that a solid price recovery may take longer than many expected, a higher dose of caution is seeping into their budgets.

“I’m sensing that there is a slowdown in capital spending for this year,” Painted Pony Chief Executive Officer Patrick Ward said in an interview. “I can see there’s a downturn in budgets rather than an expansion right now.”

The restraint echoes spending cuts by American shale explorers like Marathon Oil Corp. and Hess Corp., who still expect to meet or exceed production goals thanks to advances in drilling technology that make wells more productive. The more thrifty approach may be good news for investors who so far have punished Canadian producers with an 17 percent decline in the S&P/TSX energy index this year. 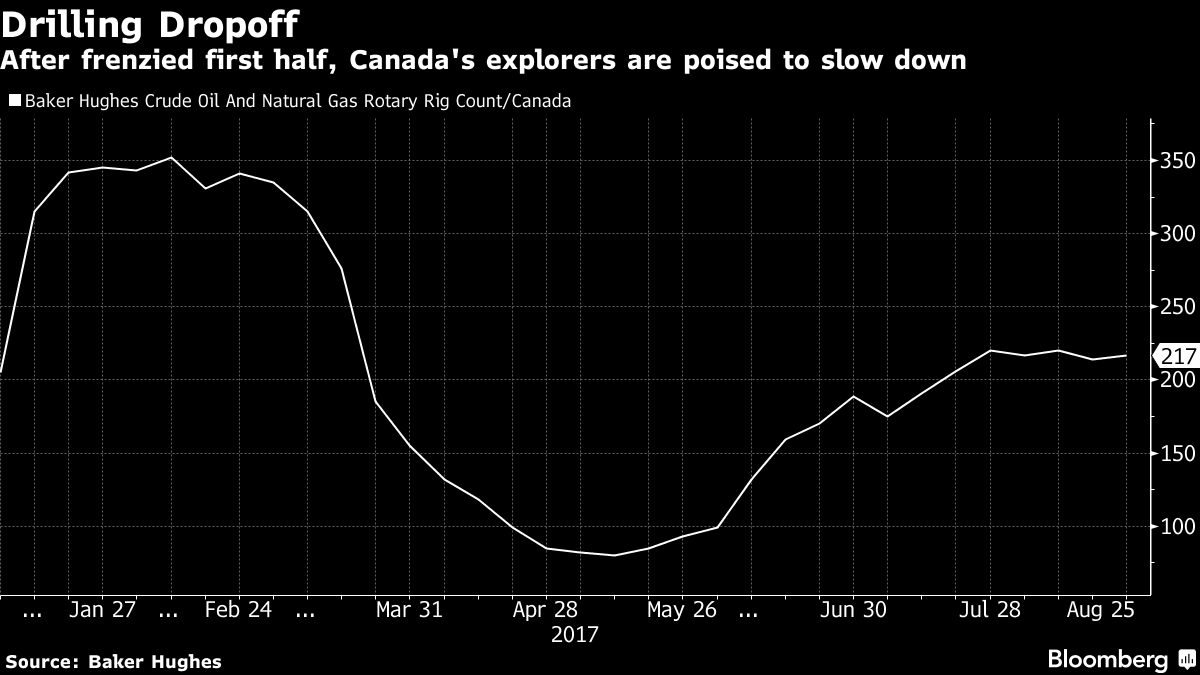 The Canadians have to cope with some extra hurdles, though — like a dearth of funding and a strengthening currency that’s making their crude and gas exports less lucrative, just to cite two.

Painted Pony, which produces natural gas from a portion of the Montney shale formation in northeast British Columbia, ramped up capital spending 64 percent from a year earlier to roughly C$58 million ($49 million) last quarter, in part because of an acquisition it completed in May. It drilled 11 wells, up from five in the second quarter of 2016.

Now the Calgary-based producer is cutting its budget for the second half of the year by C$33 million. The company said Wednesday that it is seeking to maintain its financial flexibility in a “lower-than-anticipated commodity price environment.” Natural gas prices have dropped 21 percent so far in 2017.

The company isn’t alone among Canada’s energy producers in weighing whether to pull back on spending. Trilogy Energy Corp. said in its most recent earnings report that it may defer a project in the Duvernay shale play, possibly trimming C$30 million from its capital spending for the year.

Similarly, Baytex lowered its cap for capital spending this year to C$330 million from C$350 million, while raising the low end of its production forecast to 69,000 barrels of oil equivalent a day, from 68,000 originally.

Obsidian Energy Ltd., previously known as Penn West, is cutting its capital budget by C$20 million but maintaining its production estimate. CEO David French said the company was able to do that because its wells in the Alberta side of the Viking formation beat expectations, helped by newer technologies that include mile-long laterals and energized fracking.

Canadian explorers drilled 3,344 wells in the first half, up from 1,439 a year earlier, according to the Petroleum Services Association of Canada, the main industry group for oilfield-service providers. The surge caught observers by surprise, prompting the group to boost its forecast for wells drilled this year three times, to 7,200 from an original projection of 4,175.

But the unique hurdles that Canadian drillers face may prompt them to slow drilling more than their U.S. peers. For one, many Canadian explorers are paying for their capital spending on their own, whereas American explorers can rely on regular top-offs of funding, French said.

“Most of the Western Canadian business has to recognize that they’ve got to be competitive in a $45 world,” French said. “There are enough plays in the lower 48 that can draw capital and still haven’t had to fight the world of being self funded.”

Canadian companies also have faced a strengthening local currency, which — since they sell their product in U.S. dollars but pay for it in loonies — raises the relative cost of their operations. Obsidian’s French said the Canadian dollar’s gain in recent months has essentially trimmed C$1 to C$2 per barrel of their oil pricing and is another reason the company has decided to be cautious in the second half.

The forecast for 2018 may come into clearer view when companies report third-quarter earnings in late October and early November. Petroleum Services Association of Canada CEO Mark Salkeld says he’s expecting a small increase in drilling next year, while Painted Pony’s Ward said that the caution may extend into Canadian explorers’ 2018 budgets as well.