London, February 1, 2021 – With just nine months to go until the critical next round of international climate talks, the world’s largest economies are far from having the right policy plans in place to meet the green pledges made at the COP21 climate conference in Paris in 2015, let alone bolder new promises to decarbonize, according to new research from BloombergNEF (BNEF).

BNEF’s G20 Zero-Carbon Policy Scoreboard evaluates the G20 countries’ decarbonization policies to measure which governments have implemented regimes to realize the goals of the Paris Agreement, or more substantial decarbonization. It highlights examples of what works and could be replicated elsewhere, and flags where more progress is needed.

“The high-level pledges over the last year, in particular, have been impressive with major economies such as the European Union, Japan, South Korea and China all promising to get to ‘net-zero’ emissions or carbon neutrality at some future date,” said Victoria Cuming, head of global policy analysis for BNEF. “But the reality is that countries simply haven’t done enough at home with follow-through policies to meet even the promises made more than five years ago.”

Much of the progress achieved to date globally in cutting the rate of growth of CO2 emissions has come in the power sector. The report evaluates national and regional power policies, while also examining other major segments of the global economy responsible for CO2 output – road transport, green fuels, buildings, industry and the circular economy.

“While some power-sector policies have delivered results, most countries have done little elsewhere in the economy,” said Cuming. “And even within each sector, it’s not enough to implement incentives for one technology – multiple pathways are required.”

The countries covered in the Scoreboard have been scored out of 100% based on 122 qualitative and quantitative metrics relating to the number, robustness and effectiveness of policies implemented. Overall, Germany and France scored highest for having the best policy mixes in place to spur decarbonization but they still have room for improvement, the study finds.

The G20 countries achieved an average economy-wide score of 47%. The nations at the top of the ranking have executed a higher number of robust, concrete measures to achieve their ambitious-but-achievable targets. They have introduced policies to drive change on both the supply and demand side. Their policy-making processes are relatively transparent and predictable, and their initiatives are starting to have a measurable impact. 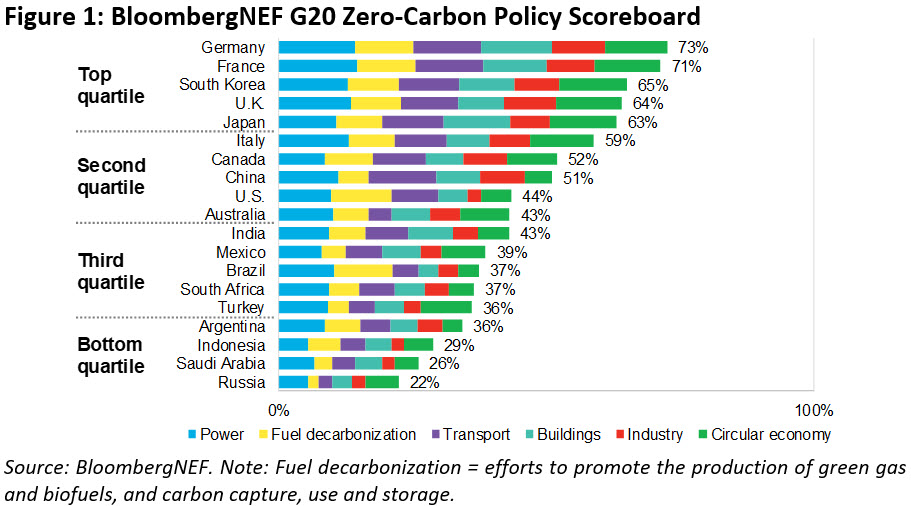 Progress across all sectors has been highly uneven. The G20 scored best collectively for its power policies (at 58%), because all of the nations have introduced some government support to promote clean technologies. However, to realize the goals of Paris, they will need to pay much more attention to other sectors, notably buildings and industry, which had average scores of 42% and 37%, respectively.

A summary of the key findings of report is available for download via this link.