Glencore Slashes Debt as It Positions for M&A in Commodities

Glencore Plc built a war chest in the first half of the year, continuing to cut debt as the world’s largest commodities trading house prepares to ramp up acquisitions.

While profits improved during the first half, Glencore kept its dividend unchanged and used the extra cash to pay down borrowings. Net debt was $13.9 billion by June, down more than 60 percent from mid-2014 when the company was digesting its merger with Xstrata Ltd.

Glencore Chief Executive Officer Ivan Glasenberg is a consummate deal-maker, having built a company worth $60 billion by buying natural resource assets including mines, oil fields and grain silos around the world, rather than building projects from scratch. 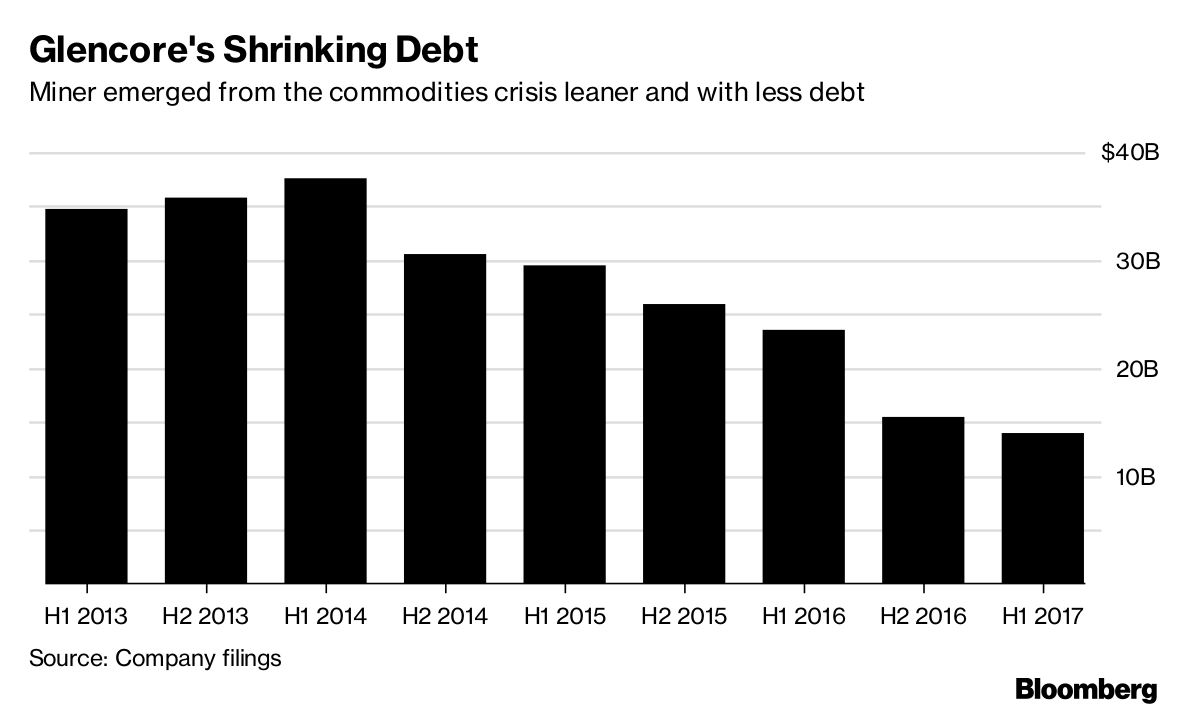 “These results indicate the strong position Glencore has built in the recent past and we expect the momentum to continue,” said Heath Jansen, a mining analyst at Citigroup Inc.

Glasenberg, 60, said in February that the “time is right” to reward shareholders after difficult years in 2015 and 2016, when the company suspended dividends and sold shares to raise cash.

Glasenberg, the pugnacious South African CEO, now appears to be strengthening Glencore’s balance sheet first, a sign the company is looking at deals, rather than immediately returning more money to shareholders.

Some investors may be disappointed that Glencore left its dividend the same given the recent abundance of cash, wrote analysts at Morgan Stanley in an emailed report.

However, Steve Kalmin, the company’s head of finance, opened the door for higher payments next year. At current prices, Glencore could pay $2.5 billion in dividends in 2018, up from $1 billion in 2017, he said.

The company cut its preferred leverage ratio to 1.07, well below its target of 2, suggesting it has the ability to pursue acquisitions. The leverage ratio reached 3 in 2015 after commodities prices tanked.

Glencore has already inked some deals, including last month agreeing to pay $1.1 billion plus royalties for a large stake in an Australian coal mine. Earlier this year, its agriculture division approached Bunge Ltd. to discuss a potential merger.

Speaking after the release of the results, Glasenberg said he would remain “opportunistic” on M&A, and reiterated his bet on agriculture, saying the company wanted to grow the business with its Canadian partners.

The Baar, Switzerland-based company announced the debt reduction after reporting profit that largely met expectations. It said adjusted earnings before interest, taxes, depreciation and amortization rose to $6.74 billion, up 68 percent from $4.02 billion a year ago.

The company was able to increase Ebitda and net income despite relatively lackluster production growth, benefiting from rising prices for commodities.

Glencore painted a bullish outlook for its trading business, with oil volumes rising strongly in the first half of the year to more than 6 million barrels a day on the back of its deal with Russian state-controlled energy giant Rosneft PJSC.

The company said electric vehicles and batteries will boost demand for metals such as cobalt, of which Glencore is the world’s largest miner.

Peter Grauer, the chairman of Bloomberg LP, is a senior independent non-executive director at Glencore.