The failure of a $27 billion project last week may offer a lesson to natural gas exporters: Go small or go home.

With a global glut dragging down prices, liquefied natural gas suppliers including Cheniere Energy Inc. and Tellurian Inc. are looking to build smaller and cheaper. Such projects — a third of the size and a fraction of the cost of most existing terminals — offer a competitive edge for supplying emerging markets like the Middle East and Latin America, where customers are seeking intermittent deliveries of small amounts of the heating fuel.

Petroliam Nasional Bhd.’s decision last week to scrap plans for the $27 billion facility in Canada stemmed from low gas prices. Energy companies haven’t moved forward with a major new LNG production plant since the end of 2014. Instead, they are funding smaller ventures such as Coral LNG in Mozambique and Woodfibre LNG in Canada, neither costing more than $10 billion. Ophir Energy Plc plans to sanction Fortuna LNG, a small floating facility off the coast of Equatorial Guinea, this year. 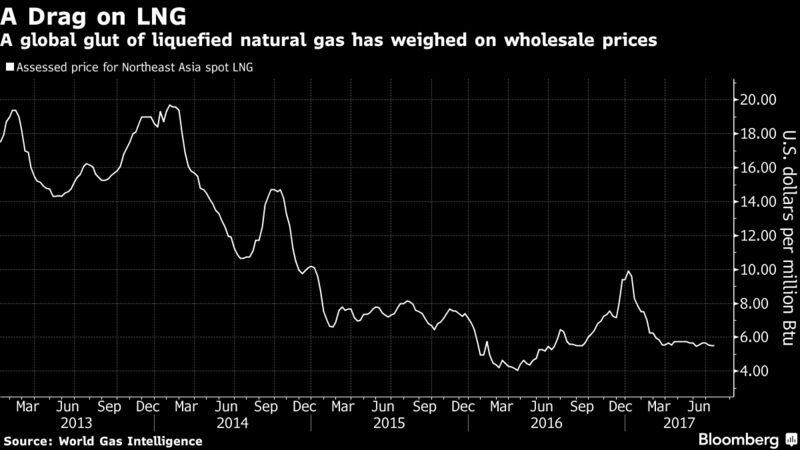 The demise of the Canadian project was “a reflection of the world that we are in,” said Ira Joseph, head of global gas and power at PIRA Energy in New York. “The market is already crowded with projects, demand is more fragmented, and there are smaller types of buyers” that need smaller sellers.

Cheniere, which began liquefying and exporting U.S. natural gas from a massive facility in Louisiana last year, is exploring building smaller-scale projects. The rush to send gas supplies to international buyers has led to an overabundance of the fuel, which is shipped via tankers that can be measured in U.S. football fields. Global LNG supply is forecast to exceed demand by 48 percent in 2020, said Anastacia Dialynas, a New York-based analyst with Bloomberg New Energy Finance who sees the glut persisting until 2026.

Meanwhile, Japan and Korea, the world’s biggest LNG customers, are no longer the only game in town. Small buyers including Pakistan, Egypt and Jordan are making up an increasing share of the global market. They’ll account for 30 percent of demand by 2030, up from 19 percent last year, according to BNEF.

In addition, spot LNG prices in Northeast Asia have plunged 46 percent to $5.85 per million British thermal units in the past three years, according to industry publication World Gas Intelligence. U.S. benchmark natural gas prices are down 26 percent over the same period and U.K. front-month gas fell 7 percent.

“You need to come to the market with a solution that can cost-wise compete in a market where the price is $5 to $6,” said Sveinung Stohle, chief executive officer of Hoegh LNG Holdings Ltd., a developer of floating LNG terminals.

Some exporters are heading offshore in a bid to cut costs. Petronas in April became the first to produce LNG from a small-scale, floating terminal. Royal Dutch Shell Plc plans to ship gas from a similarly small project off Australia’s coast next year.

In the U.S., Kinder Morgan Inc. is developing a $2 billion gas export project in Georgia that will be made up of 10 individual units that combined will be capable of liquefying 2.5 million tons a year — less than a 10th of what Cheniere’s Louisiana project will be able to produce in 2020.

But LNG demand from China has been robust this year and the nation’s “smaller cities” are looking to lock in gas supplies directly, said Paul Wogan, chief executive officer of tanker owner GasLog Ltd. Huadian Power International Corp. and Beijing Gas Group Co. are among the handful of Chinese companies that have signed contracts for small volumes. They each represent about a half a million tons a year, but that quickly adds up, according to Wogan.

“It’s become a buyer’s market,” Hoegh LNG’s Stohle said. “All the big sellers have to also work on smaller markets that they previously said no to.”