BloombergNEF’s annual investment report records a 27% rise from 2020 to 2021, with almost half of all investment occurring in Asia

London, January 27, 2022 – Global investment in the energy transition totaled $755 billion in 2021 – a new record – off the back of rising climate ambition and policy action from countries around the world, according to Energy Transition Investment Trends 2022, a new report published by research firm BloombergNEF (BNEF).

Investment rose in almost every sector covered in the report, including renewable energy, energy storage, electrified transport, electrified heat, nuclear, hydrogen and sustainable materials. Only carbon capture and storage (CCS) recorded a dip in investment, though there were many new projects announced in the year.

Energy Transition Investment Trends is BNEF’s annual accounting of how much businesses, financial institutions, governments and end-users are committing to the low-carbon energy transition. Renewable energy, which includes wind, solar and other renewables, remains the largest sector in investment terms, achieving a new record of $366 billion committed in 2021, up 6.5% from the year prior. Electrified transport, which includes spending on electric vehicles and associated infrastructure, was the second-largest sector with $273 billion invested. With electric vehicle sales surging, this sector grew at a breakneck rate of 77% in 2021, and could overtake renewable energy in dollar terms in 2022. 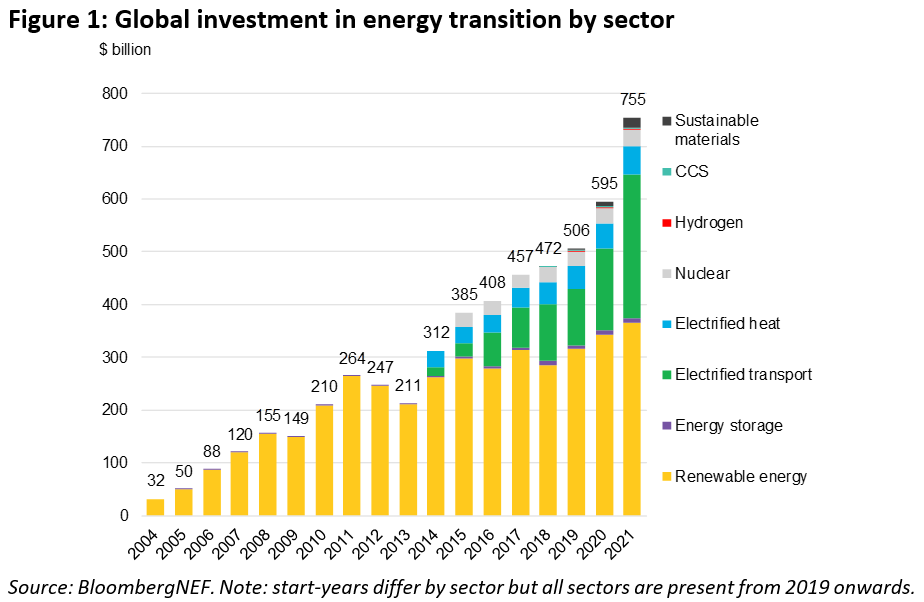 Together, clean power and electrification (comprising renewables, nuclear, energy storage,  electrified transport and electrified heat) accounted for the vast majority of investment at $731 billion. Hydrogen, carbon capture and storage and sustainable materials made up the rest, totaling $24 billion.

Albert Cheung, Head of Analysis at BloombergNEF, said: “The global commodities crunch has created new challenges for the clean energy sector, raising input costs for key technologies like solar modules, wind turbines and battery packs. Against this backdrop, a 27% increase in energy transition investment in 2021 is an encouraging sign that investors, governments and businesses are more committed than ever to the low-carbon transition, and see it as part of the solution for the current turmoil in energy markets.”

Record amounts were invested in all three regions covered in the report: Asia Pacific (APAC), Europe, Middle East & Africa (EMEA), and the Americas (AMER). APAC was both the largest region for investment at $368 billion (nearly half the global total), and the region with the highest growth at 38% in 2021. Energy transition investment in EMEA grew by 16% in 2021, reaching $236 billion, while the Americas saw investment grow by 21% to $150 billion.

Getting on track for net zero

BNEF’s 2021 New Energy Outlook (NEO) mapped out three alternative scenarios (dubbed Green, Red and Gray) for reaching global net zero by 2050, in line with 1.75 degrees of global warming. Today’s report, when compared with NEO, shows that investment levels need to roughly triple, such that they average $2.1 trillion per annum between 2022-2025, in order to get on track for any of those three scenarios. They then need to double again, to an average of $4.2 trillion between 2026 and 2030. At current growth rates, the electrified transport sector has the best chance of getting on track for such investment levels; other sectors look less likely to get on track.

Matthias Kimmel, Head of Energy Economics at BNEF, said: “The world is rapidly running out of carbon budget to meet the goals of the Paris Agreement. The energy transition is well underway, and moving faster than ever, but governments will need to mobilize much more finance in the next few years if we are to get on track for net zero by 2050.”

The report also finds that climate-tech corporate finance totaled $165 billion in 2021. This category of investment, not included in the $755 billion, describes new equity financing raised by companies in the climate-tech space, either from public markets or private investors. This capital will be used in the coming years to scale up these companies’ operations and further develop their technologies. Two-thirds of this funding came from public markets, including SPAC reverse mergers, and the vast majority went to companies focused on the energy and transport sectors.

Claire Curry, Head of Technology & Innovation at BNEF, said: “There has never been more capital available to companies tackling the hardest aspects of the climate challenge. It is true that we have solutions ready to deploy today, but there is still the need for continued innovation. All forms of corporate finance will play an important role in helping develop and scale climate-tech in the coming decade.” 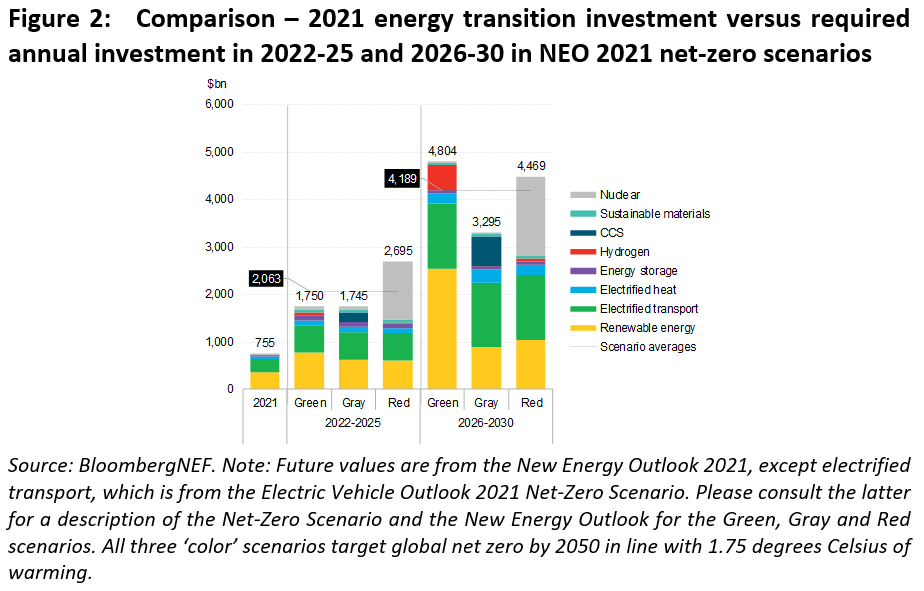 An abridged version of Energy Transition Investment Trends 2022 can be downloaded from this page. BNEF subscribers can find the full report on the client website and on the Bloomberg Terminal.