Global Wind Industry Had a Record, Near 100GW, Year as GE, Goldwind Took Lead From Vestas

Global commissioning of wind turbines was up 59% to 96.7GW in 2020 as installations surged in China and the U.S. New offshore wind capacity was down 13%

Developers commissioned some 96.7 gigawatts of wind turbines globally in 2020, compared with 60.7 gigawatts the previous year. Most of these were on land (93%), as the addition of new turbines at sea fell to 6.5 gigawatts – a 13% drop compared to 2019.

Just four manufacturers accounted for more than half (51%) of the machines deployed: General Electric (GE), Vestas, Goldwind and Envision all commissioned over 10 gigawatts last year, as the gap widened between the leading manufacturers and smaller players.

The latest data from research company BloombergNEF (BNEF) shows that GE and Goldwind were the top two turbine suppliers in 2020, following a surge in installations in the U.S. and China. Vestas, which placed first for four years, fell to third place in the 2020 ranking[1]. The figures draw on BNEF’s global database of wind projects and extensive information from the industry.

“GE and Goldwind claimed the top two spots in this year’s ranking by concentrating on the largest markets. This strategy may not be as fruitful in 2021 as subsidies lapse in those areas,” said Isabelle Edwards, wind associate at BloombergNEF and lead author of the 2020 Global Wind Turbine Market Shares report. “Vestas takes on less market risk, with turbines commissioned in 34 countries last year.”

GE earned its spot at the top of the ranking by increasing its onshore installations by 6.6GW year-on-year, with installations in the U.S. accounting for some 70% of its 13.5GW global portfolio. China, meanwhile, accounted for 98% of the capacity commissioned by Chinese turbine makers.

BNEF identified 57.8GW of new wind capacity commissioned in China last year. In the onshore market, this was more than was commissioned by the entire world in 2019. This surge in demand for turbines in China allowed smaller domestic turbine makers to fully utilize their idling manufacturing capacity, and gain ground on their foreign competitors in the global ranking.

“While every region commissioned more wind capacity than the year prior, the unprecedented growth observed in 2020 should be credited to the Chinese wind market,” said Edwards. “Nearly every turbine maker is now selling turbines into China, and in 2020 it was the second-largest market for both GE and Vestas.”

“Over twenty turbine makers supplied wind turbines to China and many of them were able to double or triple their year-on year installed capacity,” said Leo Wang, Beijing-based wind associate at BNEF. “The expiring onshore and offshore subsidies fuelled the uptick in installations. Following the lapse of onshore feed-in premiums, the market is likely to see demand drop this year.”

The U.S. commissioned 16.5GW of new wind capacity last year, as developers prepared for a phase-out of the production tax credit. This was 77% more than in 2019 and 2.6GW higher than the country’s previous record in 2012. GE supplied 57% (9.4GW) of this new capacity, and stretched its lead over the competition. Vestas’ market share sank to 31% in 2020, even though the Danish turbine maker commissioned a company record of 5.1GW across 14 U.S. states.

Total onshore wind additions in 2020 were 19.4GW in the Americas, 12.6GW in Europe[2] and 863MW in Africa and the Middle East, while Asia Pacific accounted for 57.3GW. BNEF’s database registered new wind farms starting full commercial operations in 44 countries. 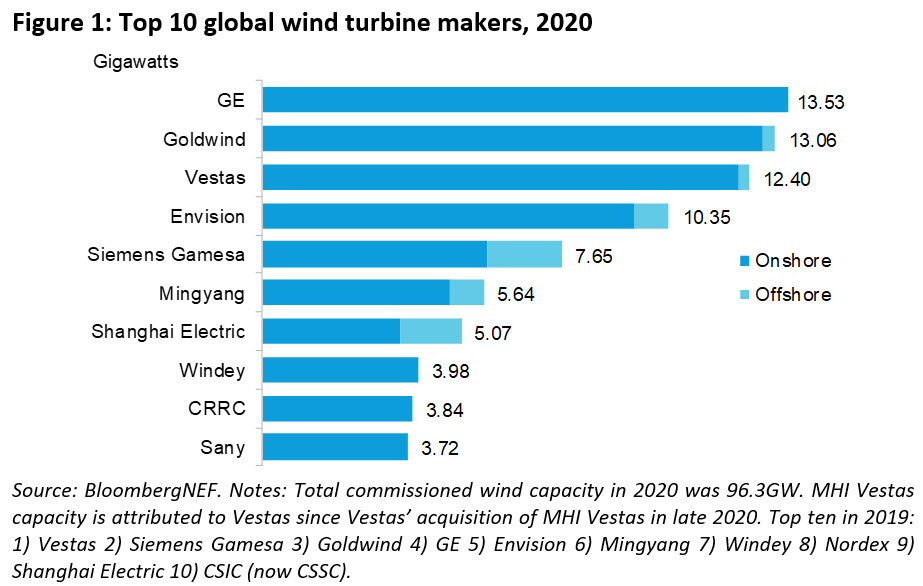 Siemens Gamesa retains its position as the leader in the offshore wind market. Last year, Siemens Gamesa commissioned 1.91GW at sea, with 752MW at the Borssele wind farm in the Netherlands, and a further 539MW at the East Anglia One project in the U.K., among other sites.

In a bid to reposition itself as a leading turbine supplier to the offshore wind industry, Vestas acquired MHI Vestas Offshore Wind in late 2020. It may be a few years before this move shakes up the turbine supply market as Siemens Gamesa already tops the offshore wind order books out to 2025. Five turbine makers from China – Shanghai Electric, Mingyang, Envision, Goldwind and CSSC – overtook Vestas, which slipped to seventh place in the offshore wind market. 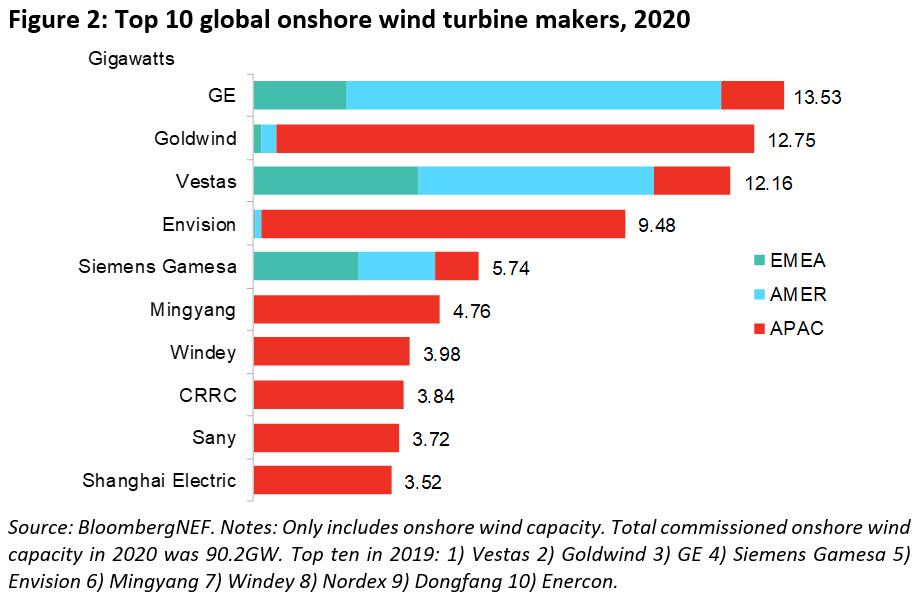 [1] The 2017 ranking included onshore only. All subsequent years include onshore + offshore.

[2] Including Turkey and Russia.