Last month, BNEF published the annual Electric Vehicle Outlook. The report highlights a transition to EVs that is progressing very differently between vehicle segments. Two and three-wheelers are well on their way, with 44% of their global sales already electric in 2020. Heavier vehicles like commercial vans and trucks are the furthest behind – only around 1% of global light commercial vehicle sales are electric today, and for heavy commercial vehicles the number is a fraction of a percentage. In general, heavier vehicles are harder to electrify.

Despite this, there are many reasons to be optimistic about electric vans and trucks. Why? First, let’s look at two important characteristics of the global commercial vehicle fleet: weight class and duty cycle. Most people intuitively understand weight classes — we can all picture a big rig transporting heavy loads. But duty cycle, or how the vehicle is driven on a daily basis, often gets missed. For example, a garbage truck is heavy but it rarely goes more than 100 miles in a day. It also almost never travels on the highway, and instead stops and starts a lot as it inches its way down the street. Duty cycles can be broadly segmented into urban, regional, and long-haul applications. Even within duty cycles and weight classes, there are some trucking applications that are weight-constrained, and others that are volume-constrained because moving say, cement is very different than moving food.

This varied matrix of commercial-vehicle applications provides a lot of starting points for electrification. This is critical, because while many people default to thinking about heavy-duty long-haul trucking applications, those are arguably the hardest for electrification — technology adoption never starts with the hardest application first. Instead technologies find niches that allow the companies deploying them to learn, improve, iterate and move on to larger niches and eventually to widespread deployment.  So pathways are more important to consider than end points when it comes to technology adoption.

There are plenty of commercial vehicles that are very much part of the addressable market for EVs today — and even more in the future as battery density continues to improve. BNEF’s latest analysis on total cost of ownership, which includes capital, fuel and maintenance costs, shows light commercial vehicles in markets like Germany are already attractive today compared to their diesel counterparts. The combination of more models, corporate fleet commitments, favorable economics and rising concern about urban air quality are set to tip the light commercial van segment toward electrification in the next few years. 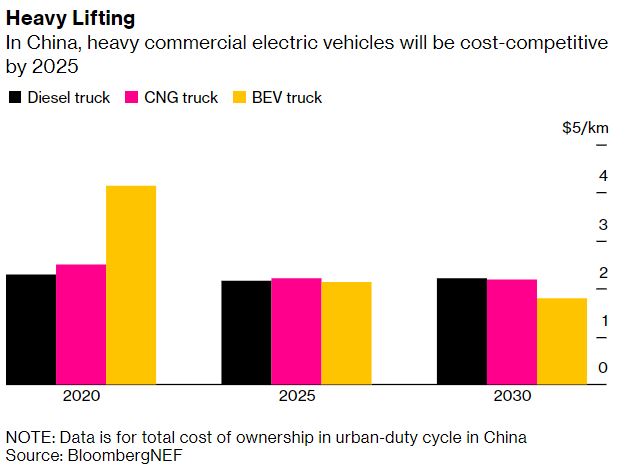 Some heavily utilized commercial vehicles could still be hard to electrify due to the downtime needed for charging. Hydrogen fuel cell vehicles can be refueled faster and could play a role for some heavy duty long-haul applications, but many of the comparisons that make fuel cell vehicles look better on paper assume relatively slow improvements in batteries and charging technology. Based on the last decade, when battery prices plummeted, battery energy density increase by about 7% a year, and charging speeds kept rising, assuming slow improvements looks like a very questionable bet. There is also growing interest in other forms of electrification for heavy trucks like battery-swapping and overhead catenary lines. Battery swapping stations for cars already outnumber hydrogen-refueling sites in China and that gap will get wider over the next few years.

The bigger barrier may be behavioral. Switching over to a new powertrain means a lot of adjustments for fleet operators. So far, electric options are reaching commercialization faster than fuel cell ones. Once operators make a switch, they’ll likely want to stick with it for an extended period of time to get a payback on their investment.

We’ll be watching the sales and model launch data closely in the years ahead to see which direction the truck market is heading. Anecdotally, the switch is already underway; I was out for a stroll recently in my neighborhood in London and noticed that the garbage trucks had gone electric.