By Joe Carroll and Thomas Black

It keeps getting deeper for Houston, the epicenter of the U.S. oil industry.

As floods inundated the nation’s fourth-largest city Monday, with more than a foot of rain likely still to come through Friday, predictions of damage ranged as high as $100 billion. Wall Street and Washington braced for the repercussions of the costliest U.S. natural disaster since Hurricane Sandy in 2012. 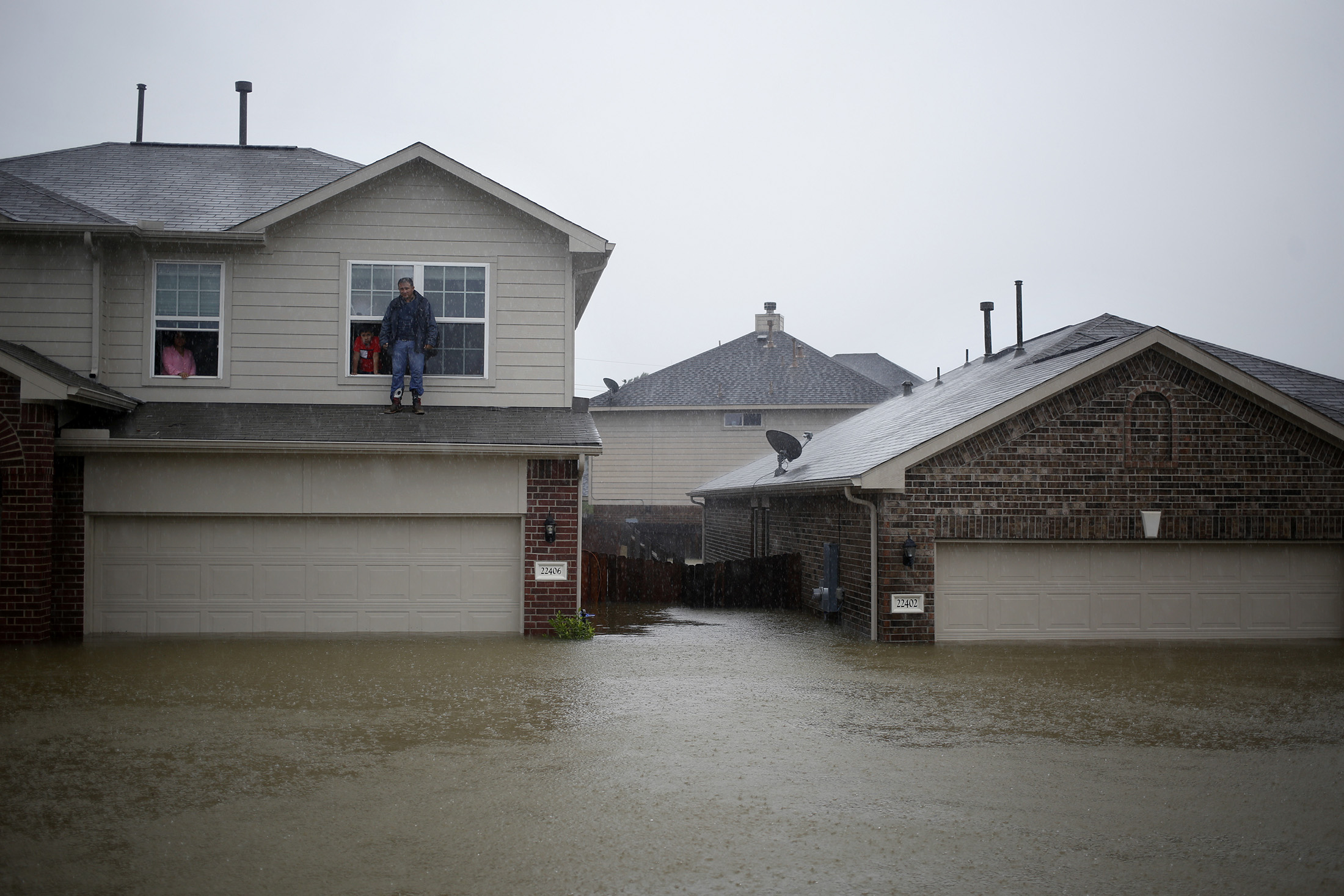 A man stands on the second story ledge of house while waiting to be rescued from rising floodwaters. Photographer: Luke Sharrett/Bloomberg

Tropical Storm Harvey, which made landfall as a category 4 hurricane, drifted into the Gulf of Mexico, poised to recharge before crashing ashore again Wednesday on the Texas-Louisiana border. As much as 30 percent of the nation’s refining power was imperiled, according to analysts at Tudor Pickering Holt & Co.

Houston was born from the wreckage of a cataclysmic storm in 1900, and in the decades since has weathered not only water and wind but the gyrating fortunes of the oil industry. The sprawling megalopolis, which takes a perverse pride in its booms and busts, will endure Harvey as well, said Patrick Jankowski, senior vice president of research for the Greater Houston Partnership.

The storm has been blamed for six deaths in Harris County since Sunday, according to county officials. Houston television station KHOU reported Monday that another six, members of one family, were believed to have drowned when floods swept away their van.

More than 30,000 residents will be displaced, a number sure to climb now that the Army Corps of Engineers has begun to release water from two dams, a relief tactic that will flood additional neighborhoods. More than 450,000 residents will require assistance, according to the Federal Emergency Management Agency, which said it will be at work in Houston for years. 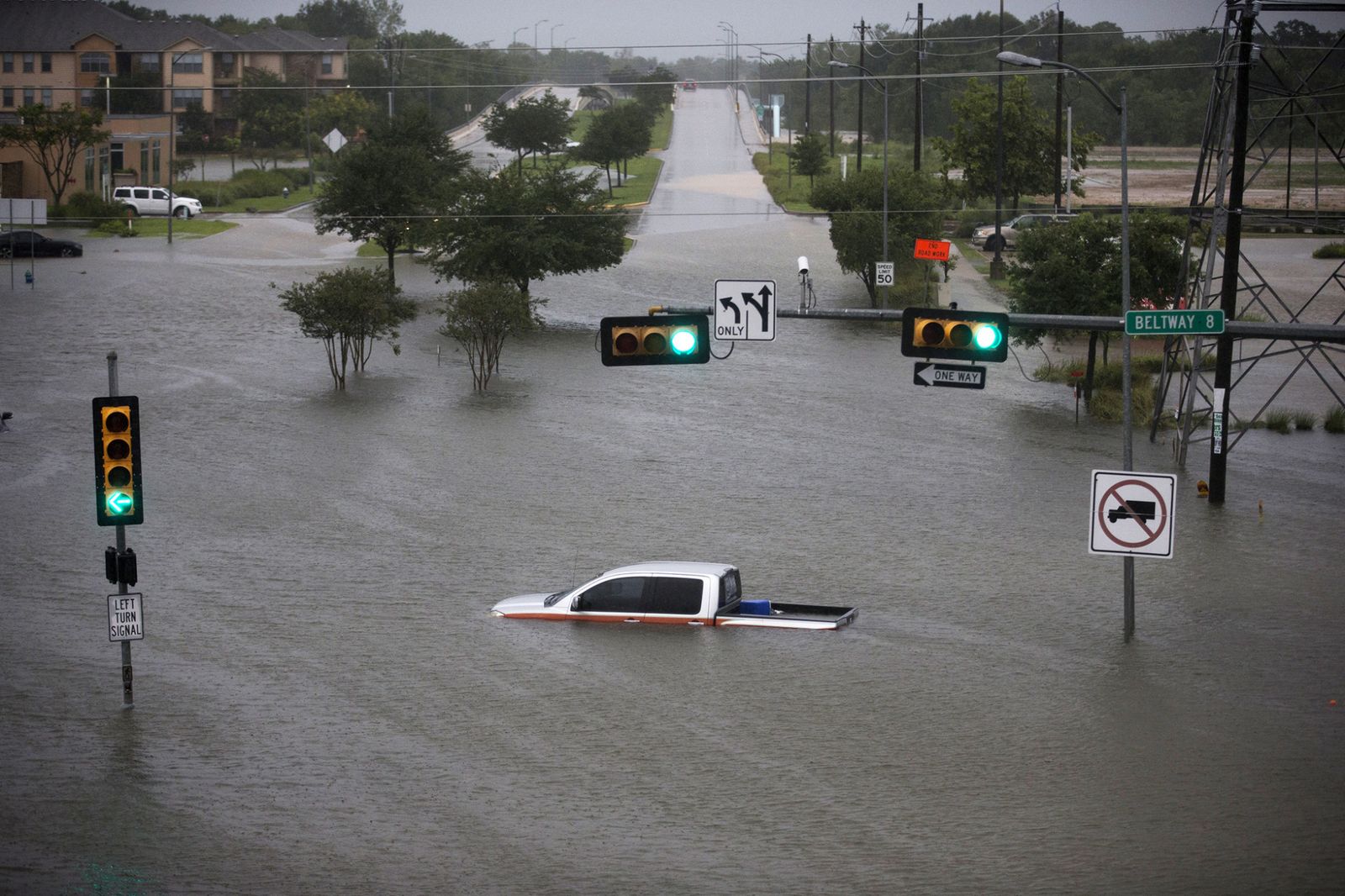 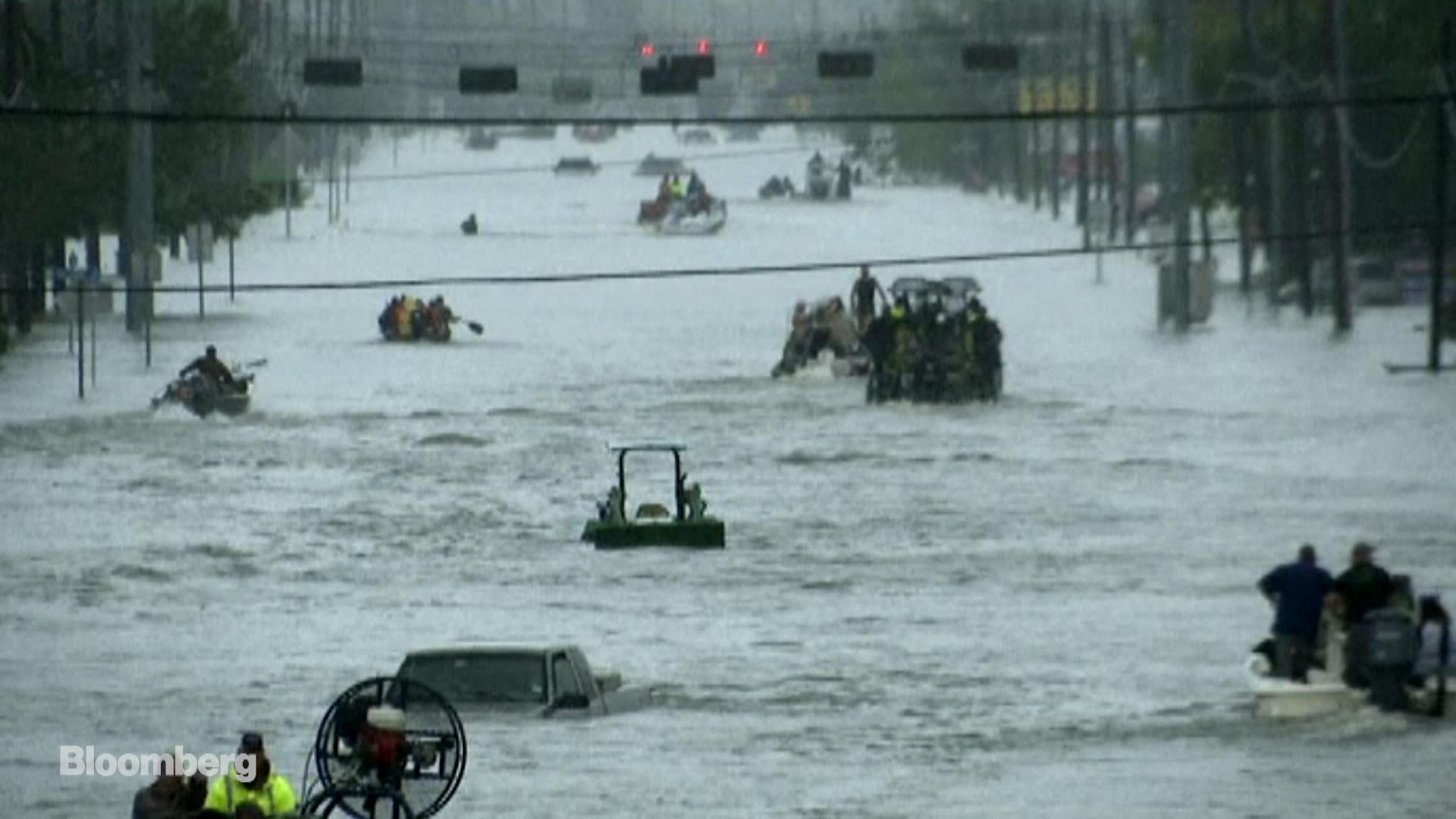 A look at how Hurricane Harvey is affecting Houston, the fourth-largest U.S. city. (Source: Bloomberg)
Hurricane Katrina, which in 2005 became the most expensive hurricane to hit the U.S., cost about $118 billion, while Hurricane Sandy cost about $75 billion. Loss estimates for Harvey vary widely, but David Havens, an insurance analyst at Imperial Capital, said costs could surpass $100 billion.

The storm promises to test the resilience of the biggest city in a state that’s home to almost 1 in 12 U.S. workers. Greater Houston, which includes eight counties, covers 8,778 square miles, an area larger than New Jersey. The metro area of 6.8 million is loosely organized with multiple centers of commerce, defined by vast and looping highways, strip malls and subdivisions. 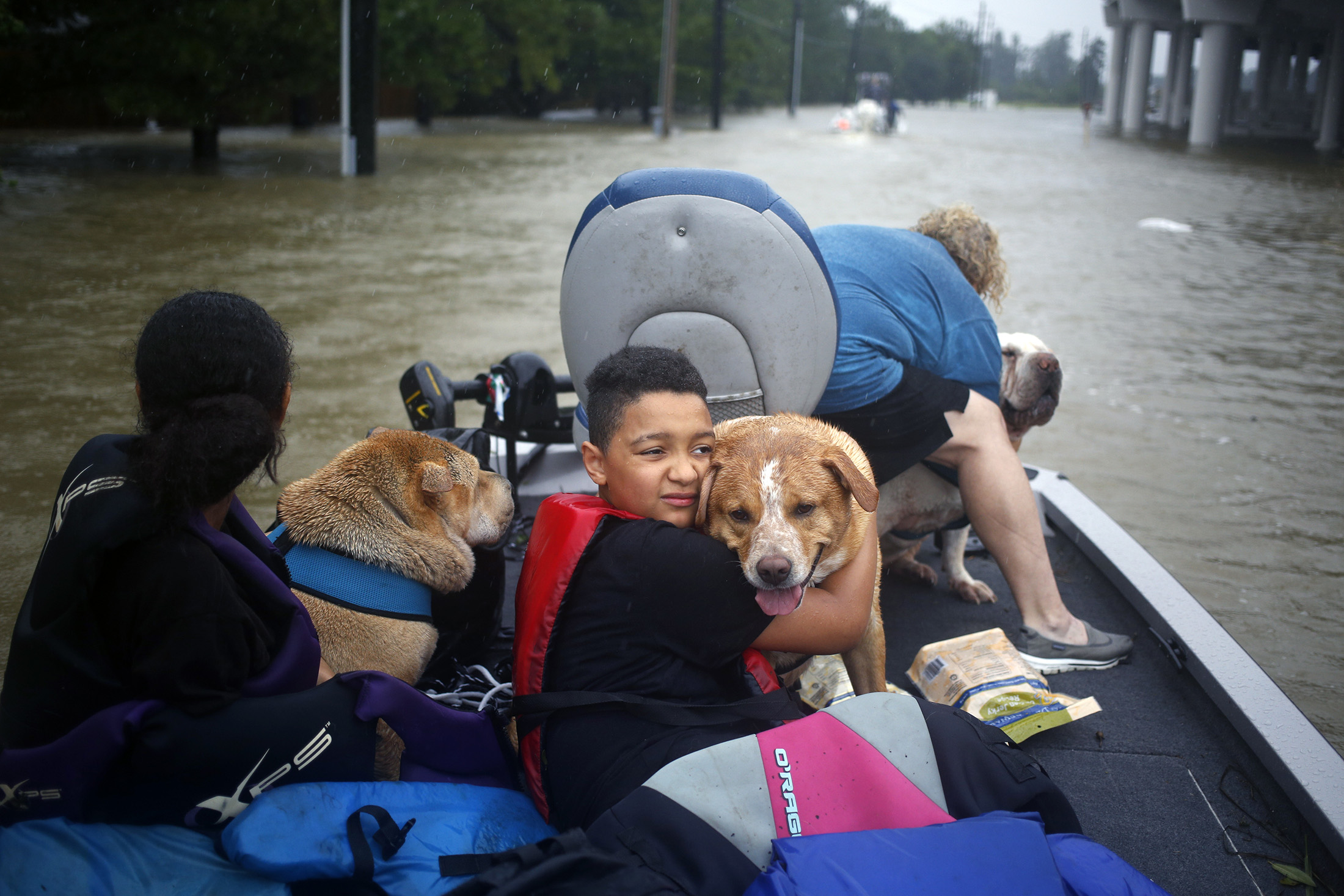 A boy hugs his grandmother’s dog after being rescued. Photographer: Luke Sharrett/Bloomberg

The nation’s most diverse municipality, Houston’s economy boomed even as the price of oil lagged. If Houston were its own country, its economy would be the world’s 30th largest, according to city statistics. Houston is the site of 18 Fortune 500 companies and the world’s biggest medical complex, but it’s synonymous with the Gulf Coast’s oil sector, an industry suddenly hobbled.

Gasoline futures in New York extended gains a sixth session Tuesday as more than a million barrels of fuel-making capacity was knocked offline; and natural-gas fields and offshore-drilling rigs shut down. The motor fuel advanced 0.4 percent to $1.7183 a gallon at 5:09 a.m. New York time.

Ports along a 250-mile stretch of Texas coast were closed to tankers. Twenty-two vessels laden with a combined 15.3 million barrels of crude from as far afield as Brazil and Colombia were drifting off the coastline, waiting for the all clear.

Ten of the state’s 25 refineries are shut down, accounting for about half the 6 million barrels per day of capacity, said Christi Craddick, chairman of the three-member Texas Railroad Commission, which regulates the industry. Companies will have to wait for floods to recede before they can evaluate damage, she said.

“Hopefully within the next week to two weeks, we’ll see refineries back online,” Craddick said.

Harvey is expected to have little effect on U.S gross domestic product though could affect shipments of fuel to other parts of the country. Over the past 12 months, the region sent 3.5 million barrels a day of gasoline and diesel shipments to the U.S. east coast, according to a research note from JPMorgan Chase & Co. Still there are ample stocks of back-up fuel, the note said.

Further, as with most natural disasters, the rebuilding of damaged homes, businesses and infrastructure will later add to the economy, said Robert Dye, chief economist with Comerica Inc., a Dallas-based bank. 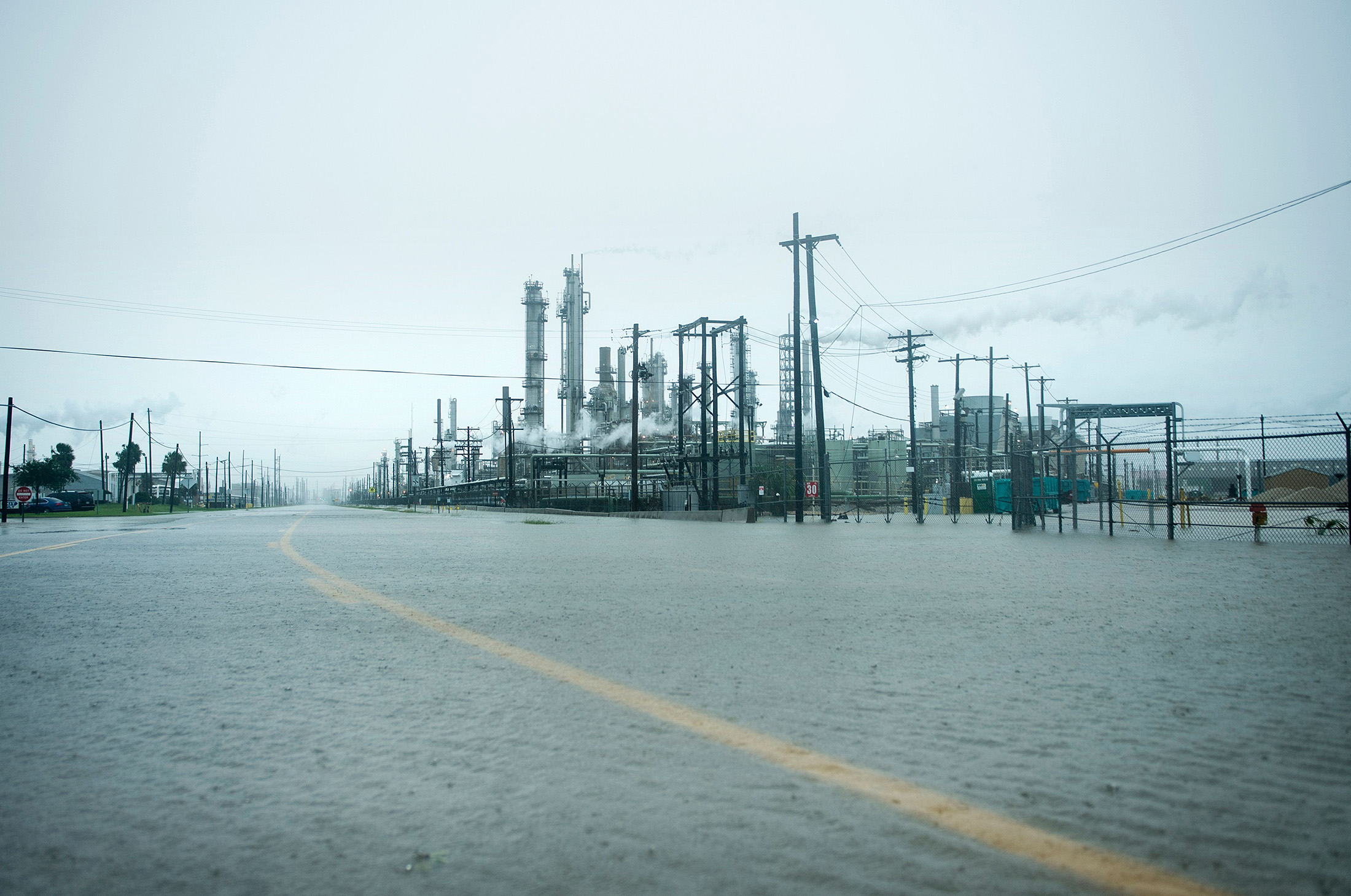 “We start to actually see increased economic activity due to all the repair and rebuilding that’s going to have to happen because of this storm,” he said.

But the Texas labor market is tight, and incentives will be needed — usually in the form of higher wages — to pull in engineers, tradesman and laborers from around the region. The Federal Reserve district banks in Dallas, Atlanta and St. Louis already have reported hiring difficulties.

Gathering manpower could be further complicated by a newly passed Texas law requiring cities to be more aggressive in helping deport undocumented people.

“If Houston is going to be rebuilt in a reasonable amount of time, it will be rebuilt with the contributions of undocumented immigrant workers,” said Mark Jones, a political-science professor at Rice University in Houston. “If undocumented immigrants are afraid or unwilling to come to Houston because of fears of deportation, that’s going to delay the recovery, as well as make it far more expensive.”

Large companies should be back on their feet within weeks, said Jankowski, whose partnership includes Exxon Mobil Corp., LyondellBasell Industries NV and Royal Dutch Shell Plc.

“The businesses that are going to be hurt the most are the mom-and-pop operations that depend so much on selling into the Houston market or don’t have flood insurance,” he said. “We will see some businesses fold as a result.” 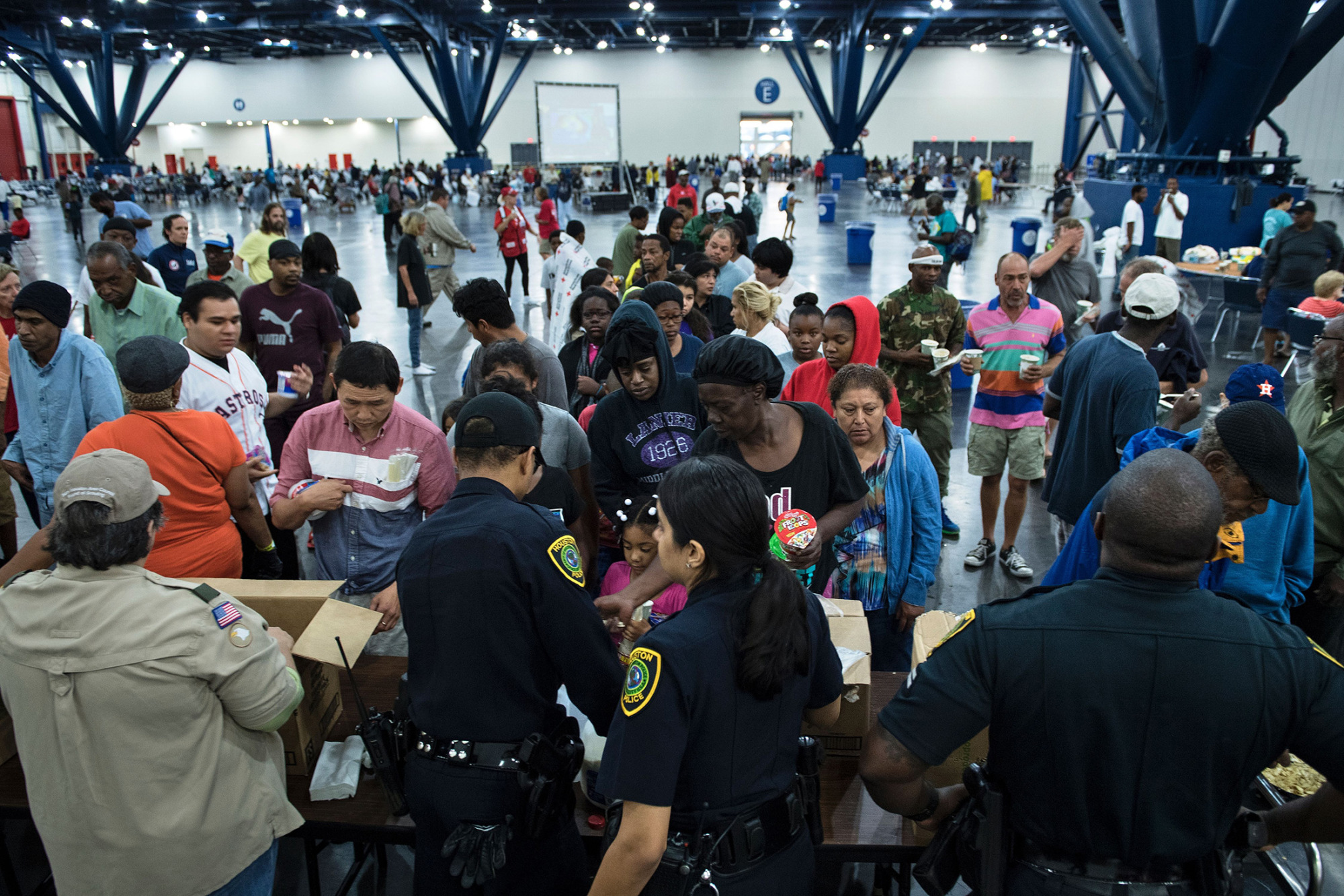 Flood victims gather for food at a shelter in Houston on Aug. 28. Photographer: Brendan Smialowski/AFP via Getty Images

The White House has taken pains to demonstrate that President Donald Trump is marshaling resources for the disaster, and the president plans to travel to Texas on Tuesday. Trump said Congress will swiftly pass emergency disaster funding, even as signs of a political fight over the money began to emerge.

House Minority Leader Nancy Pelosi of California said any bill should be exempt from offsetting spending cuts. It wasn’t clear whether Republican leaders such as Texas senators Ted Cruz and John Cornyn, who opposed an aid package after Sandy hit New York and New Jersey, would back such a bill.

Harvey has drenched Houston with as much as 36 inches (91 centimeters) of rain, and downpours will last through the week, the National Hurricane Center said. The state’s 12,000-strong National Guard was activated, and volunteers joined emergency teams as thousands of people fled to rooftops and higher ground. Houston police rescued 3,052 people, Mayor Sylvester Turner said at a news conference Monday evening. A Coast Guard official said the agency was receiving more than 1,000 calls an hour.

Turner said about 4,800 residents had been evacuated to the George R. Brown Convention Center, one of the city’s largest temporary shelters. He urged people to stay off the roads as darkness fell.

Slammed now by one hurricane, Houston was forged by another. The 1900 storm hit nearby rival Galveston, then one of the country’s busiest ports. It remains one of the deadliest natural disasters in U.S. history, causing more than 8,000 deaths.

Afterward, local officials pushed for a deepwater port in Houston. It opened in 1914, with then-President Woodrow Wilson celebrating by firing a cannon via remote control from Washington. The population took off, far outpacing Galveston’s, and Houston became the leading city of Texas by 1930. From the bayous and marshes rose a metropolis.

“This city will come back stronger than it was before Hurricane Harvey,” Turner said. “Anybody who bets against the city of Houston is a loser.”