How Many Billionaires Would It Take to Save the Planet?

Could a handful of the world’s richest people giving away their wealth make a real impact on climate change?

Bloomberg’s Robin Hood Index calculated what slice of each top billionaire’s fortune would be needed to buy all the carbon credits required to offset all domestic greenhouse gas emissions in their home country over a year.

As an intellectual exercise, one can only imagine what the most affluent in 44 countries, with an estimated wealth of $786 billion, or a cool 1 percent of the world’s gross domestic product, can do with their money that government and agencies can’t.

The answer is quite a lot. Only in China and Brazil is the biggest fortune too small to “clear the air” for a year. Investor Jorge Paulo Lemann’s $29 billion comes close to settling Brazil’s cleaning bill while Alibaba Group’s Jack Ma would need to double his $37 billion to offset the damage caused by the world’s biggest polluter. 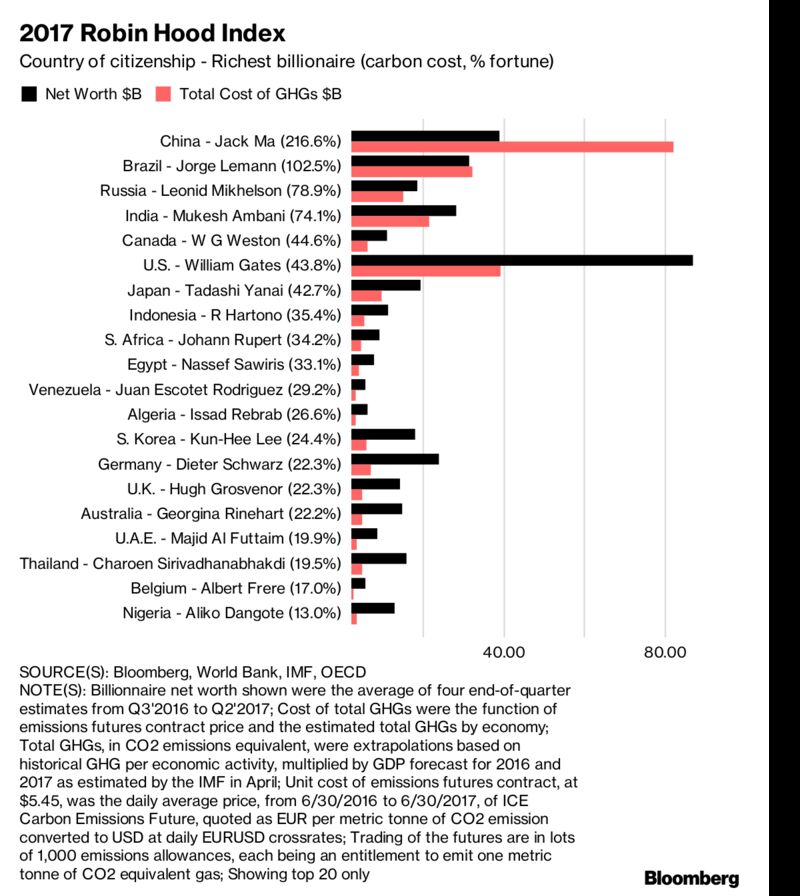 The fast developing countries are also among those doing most harm to the climate. But what emerged from our analysis is that in Russia and India, gas mogul Leonid Mikhelson and oilman Mukesh Ambani have plenty of money to spare even after offsetting the emissions in their respective countries.

Carbon taxes don’t actually eliminate pollutants. With carbon trading, national governments set a cap on emissions and can either give rights to pollute or auction off some permits within the limit. Companies can then buy these credits, allowing them to pollute, or sell them, making a profit if they clean up. Emissions fall when governments periodically lower the caps.

The European Union has been debating a proposal to revamp its 12-year-old cap-and-trade system that fails at increasing the penalty for polluting. Even if the EU’s richest got together for the greater good, the 28-nations region would still need to find ways to agree on energy efficiency improvements, to move further away from fossil fuels turning to renewable energy.

One new obstacle is President Donald Trump, who has pulled the U.S. out of the Paris climate change accord, which provides guidelines on pollution levels. Moreover, his $2.9 billion fortune, according to the Bloomberg Billionaires Index, would theoretically be enough for only 8 percent of the country’s required credits.

Fortunately for this Robin Hood fantasy, Microsoft Inc. founder Bill Gates’s $85 billion would pay for more than two years’ worth of carbon credits offsets (assuming a flat rates for emissions and credit prices) — with enough money remaining to pay the bills for neighbors Canada and Mexico.

Sweden, with a highly energy efficient economy that emits one of the lowest levels of pollution to boost the economy, would be one of the easiest clean-up jobs for Robin Hood and his band of thieves.

The success of Swedish furniture chain Ikea Group has provided founder Ingvar Kamprad, with enough money to keep his country’s air “clean” for about 150 years. No assembly required.