By Bryony Collins, Bloomberg New Energy Finance editorial team. This article first appeared on the Bloomberg Terminal and is available to BNEF clients on the web.

The risk of natural catastrophe could reduce the availability of insurance coverage for some renewable energy projects in the Caribbean and Southeast U.S., according to GCube Underwriting Ltd., which has insured around 95 gigawatts of wind and solar projects globally.

The increased volatility from natural perils is catching some insurers off guard, and GCube is trying to “limit its exposure” to high-risk areas as much as possible, said Jatin Sharma, the company’s president of North America, in an interview with BNEF. Hurricane Maria, which hit Puerto Rico last September, caused so much damage to renewable energy projects that developers “claimed in excess of $10 million”, and that’s despite paying less than $400-500,000 in premiums, Sharma said.

A combination of “increased competition from the global insurance market, new entrants, over-capitalization and weak underwriting” is putting pressure on the Caribbean insurance market to the extent that some insurers are pulling out. GCube turns down about ten accounts every year.

The insurer is facing pressure to lower its premiums in the more mature markets of Western Europe where competitive auctions are forcing developers to cut costs as much as possible. The requirement continually to reduce prices “is making the sustainability of what we do challenging”, said Sharma. He prefers to take the approach of working with clients to manage the potential risks of projects from the outset, which could have a “greater impact on their profitability than just decreasing the insurance premium by 10 percent,” he said.

Developers should factor in the cost of insurance when evaluating the business case for a project, said Sharma. The cost of building a renewable energy project in Chile or Thailand could be as much as four times that of a wind farm in Germany, because these countries have a less established industry base and are at risk of natural catastrophe, he explained.

Q: Give us some background to GCube and where you work.

A: GCube is the leading provider of renewable energy insurance – underwriting in the region of 95 gigawatts of predominantly onshore and offshore wind and solar PV in about 40 different countries.

Q: What is the biggest change having an impact on insuring renewable energy?

A: In the last few years much of the solar industry, and to some extent the wind industry, has gone into areas of high-resource, cheap land with poor geo-coding data. Some of it has been at the periphery of flood zones where land is very cheap. We’re finding that there’s not enough buffer in those locations to make sense [in terms of] the economics of a project. A number of these clients have had their solar projects go through significant flood.
A lot of people have relied on insurance as a catch-all for this sort of issue, but it’s no longer sudden and unforeseen if you’re expecting a flood every 1 to 5 years. It doesn’t make sense for insurance.

Site location for solar, particularly in the U.S. outside of California, has become a very sensitive issue.

Q: Is this pushing up insurance premiums?

Following Hurricane Harvey, people may struggle to secure the same level of coverage they have been used to for commercial property in Houston, as insurers reevaluate their coverage offerings. It becomes a question of how much insurers want to expose ourselves to this in the future.

Other times clients may agree with their lenders to have an increase in their deductibles so they’re retaining more of that risk – that’s all part of the negotiations.

Q: Can you give an example of somewhere you declined to provide insurance due to risk of natural catastrophe?

A: There are various example of projects in Louisiana and Florida. We actually looked at a number of projects in Puerto Rico in April 2017, but the terms and conditions that the broker and developer were looking for were around 40-50 percent off in terms of pricing where we felt they should be. It just so happened that 2017 was a very active year for hurricanes and those projects have claimed in excess of $10 million and the premiums were less than $400-500,000. So even if they’d stayed with that insurer for 20 years, they still wouldn’t have paid off the claims. So there’s increased volatility in some of these market from natural perils.

What is catching some of our competitors by surprise are areas that you wouldn’t associate with flash flooding in the U.S. You wouldn’t think of Arizona as a place that gets flash flooding but actually you get some.

If you were building a large CSP [concentrated solar power] project in Spain, you would spend a lot of money on drainage because you’d realize that extremely heavy rains for 1 or 2 days could really destroy part of the project. So you over-engineer drainage for the site and deal with it. [We need to see the same kind of recognition of flooding risk in areas like Arizona.]

Q: How has your business in the Caribbean been changed by these events?

A: We usually see about ten accounts that we’re not writing every year, and every year the rates have been pushed down. It’s because of increased competition from the global insurance market, new entrants, over-capitalization and weak underwriting. We have to realize the increased volatility in places like the Caribbean or southeast U.S. These are areas where we should be limiting our exposure.

Q: To what extent have projects been damaged?

A: In the Caribbean we’ve seen everything from zero to 90 percent of damage. It’s part of our ongoing claims analysis now to try and understand why one wind farm in one part of Puerto Rico had pretty much all blades destroyed, and another farm was more or less fine. The rooftop side of the solar industry fared reasonably well.

[It’s not just a matter of the manufacturer and technology type because] clients don’t just buy insurance for physical assets, but also for loss of revenue including contingent business interruption, which could be if the grid goes down and you’re not able to export power. [In this case an insurer] will be indemnified for that loss of revenue. That’s what’s happened in Puerto Rico and elsewhere.

Some insurers are pulling out of the Caribbean ground-mounted solar business based on the claims they’ve seen. It becomes a judgment call whether an insurer wants to stay in the market or pull out.

Developers should evaluate the business case for doing something, before they even think about insurance. Insurance costs will be high in places like the Caribbean [and that will affect an investor’s rate of return]. The cost can be a factor of 3 to 5 times higher than in places like Germany or North Dakota.

Q: In more mature and stable markets for renewable energy like Western Europe, have you seen insurance premiums drop as the risk has decreased?

A: Developers in the U.K., France, Germany and Spain are probably paying in the region of 1,000 to 3,000 euros per megawatt of installed capacity as an insurance premium. You try and equate that to a developer going into Chile, South Africa or Thailand and it’s a different ball game. You’ve got significantly longer lead replacement times, possible natural catastrophe risk; and you’re far from an established labor force. So your costs are then between 1.5 and 4 times what you’re maybe paying on a wind farm in Germany.

People will factor this in [and decide whether to invest] not based on insurance but on resource and yield. If you think that your wind speeds will be 30 percent higher in those places, [that will feed through to your margins and so] you can factor in higher insurance. It’s a question of risk-reward, and political risk plays a large part of that. 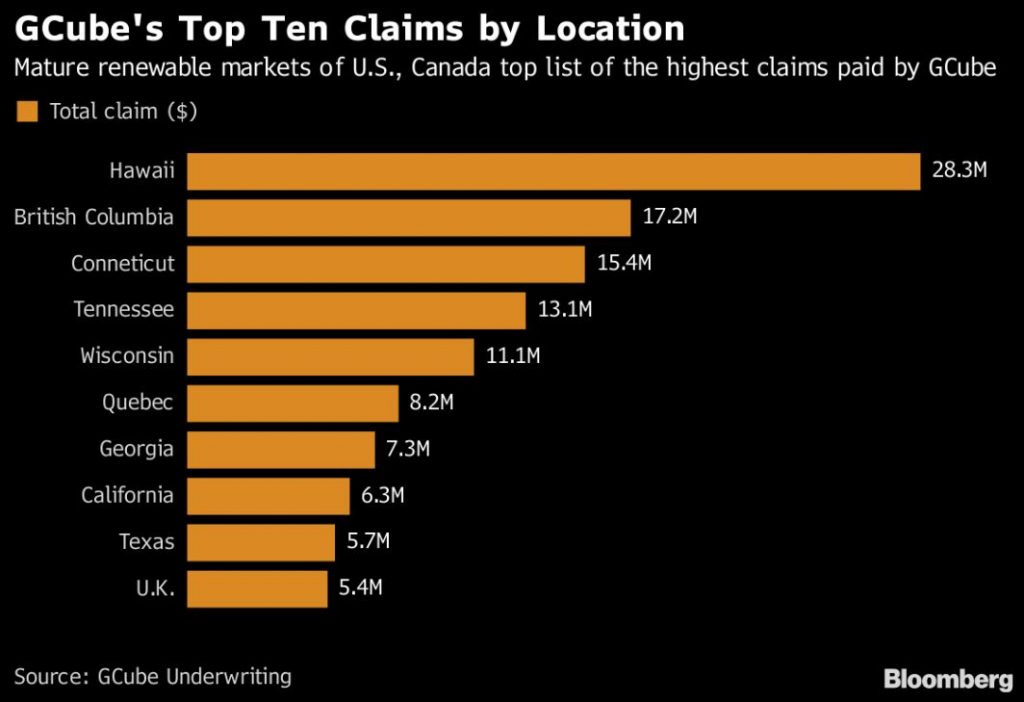 Q: Does the drive to auctions and ever-decreasing prices put a squeeze on the insurance market?

A: A lot of margins are being squeezed [for our clients]. Someone described renewables as going from a Gucci phase to a Primark phase – [many developers] are getting very frustrated by auctions and is there enough money to be made?
Insurers are seeing that same pinch. [However,] developers have enjoyed a number of years of having healthy margins, whereas insurers haven’t necessarily had that same luxury [due to the claims we’ve had to pay out on]. Soon we are going to be celebrating half a billion dollars of claims we have paid out to renewable energy.

We cannot drastically reduce pricing now that developers are going through challenging auction processes. We’ve been effectively subject to auctioning for as long as we’ve been working. Developers all want to win contracts but it is making the sustainability of what we do challenging.

Rather than focusing on cost, I prefer to work with clients about what is in their control and [how we can provide] them with examples of potential risks in the region where they are looking to bid. This should have a greater impact on their profitability than just decreasing the insurance premium by 10 percent because they want to be competitive in auctions. The earlier we get involved, the more we have the ability to influence the design envelope. For example if a developer is building in an area where claims are more likely – [we can suggest] they over-engineer projects to increase site elevations or provide drainage for a flood-risk area. We have seen cases of where clients have invested in these measures [and their projects are the ones still generating power at times of natural catastrophe].

Q: Which markets are becoming more favorable to renewables?

A: Central and Latin America continue to be a major focus for us. We’ve already done business there for the last ten years, predominantly in Brazil, Mexico and Chile, and there are some other markets where we’re seeing more business. Parts of Africa and Asia Pacific have been more established for us in the last five years, like Thailand, South Africa and Morocco – and they will continue as well as newer markets opening up in the EMEA region.
We have done a lot more business in places like Jordan, Pakistan, Israel and Egypt.