This analysis is part of Hyperdrive, a series devoted to the future of cars. It appeared first on Bloomberg.com.

Falling battery prices have been one of the most consistent trends in the electric vehicle industry for the last decade. Prices dropped from well over $1,000 per kilowatt hour in 2010 to $141 per kWh last year. This jump-started one of the biggest shifts in the auto industry in the last century, spurring automakers to plow billions of dollars into EVs.

The trend has ground to a halt this year, with BloombergNEF’s annual lithium-ion battery price survey showing a 7% increase in average pack prices in 2022 in real terms. This is the first increase in the history of the survey. 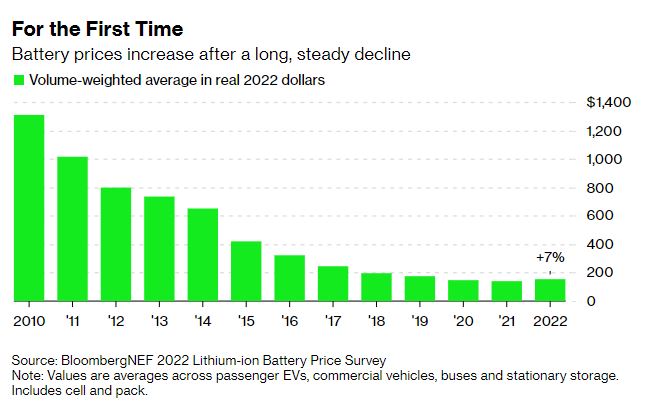 There are several factors driving the uptick, but the single most important one is rising costs for materials including cobalt, nickel and lithium. While prices for nickel and cobalt have come down in recent months, and lithium may be about to turn, each of these are still higher than they have been in previous years. This is driven by surging battery demand and a lag in how fast new supply can be brought online.

The average battery price would have been even higher if not for the shift to lower-cost lithium iron phosphate (LFP) batteries, which contain no nickel or cobalt. LFP batteries have gained significant market share in the last three years, with BloombergNEF expecting them to account for around 40% of global EV sales this year. Battery manufacturer margins also are lower this year, suggesting they’ve absorbed some of the rising costs of materials and components.

To arrive at the average price, BNEF gathered almost 200 survey data points from buyers and sellers of lithium-ion batteries going into passenger EVs, commercial vehicles, buses and stationary storage applications. The headline figure is a volume-weighted average, so it hides a lot of variation by region and application. The lowest prices recorded were for electric buses and commercial vehicles in China at $131 per kWh. Average pack prices for fully electric passenger vehicles were $138 per kWh.

On a regional basis, pack prices were cheapest in China, at $127 per kWh. Packs in the US and Europe were 24% and 33% higher, respectively. 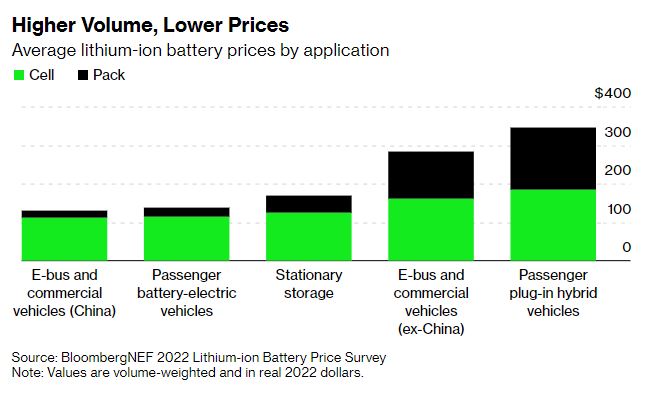 The big question is what happens next. BloombergNEF’s energy storage team expects prices to remain elevated next year, rising slightly in real terms over 2022 levels. Beyond that, the team is expecting prices to begin falling again in 2024 as more raw material supply comes online, supply chain pressures ease, and next-generation battery technologies and pack designs start to make their way into the vehicle mix.

An oft cited benchmark for when EVs hit price parity with conventional vehicles is $100 per kWh. Based on the updated estimates for the learning rate for batteries from this year’s survey, BNEF predicts that average pack prices should fall below that threshold by 2026. This is two years later than previously expected.

It’s worth noting, though, that $100 per kWh is a nominal figure that’s been around for over a decade and doesn’t fully take into account how the cost of almost everything has increased due to inflation, particularly in the last 18 months. Average new-vehicle transaction prices in the US climbed to more than $48,000 this year, the highest ever. EVs are pulling up transaction prices a bit, but the cost of making a vehicle with an internal combustion engine also is rising.

EV price parity is better thought of as a range than a fixed threshold. At today’s battery prices, some vehicle segments can already go fully electric cost-effectively without subsidies. Premium electric vehicles, for example, arguably are at price parity with internal combustion models already, as are mini city cars in China, where EV options start at just $5,000. For commercial vehicles like buses and delivery vans, where total cost of ownership matters most, parity is also already here or very close depending on the region and usage pattern.

Battery prices do still need to fall further for more of the middle market to go electric this decade. That’s definitely still achievable, but will require much more investment in all areas of the battery supply chain, as well as in R&D and manufacturing process improvements.