India is scaling back expectations for power demand growth as it struggles to electrify millions of homes despite a glut in generation capacity.

The world’s second-most populous nation is building more power plants than it can utilize as state-level distributors struggle to connect 50 million households, according to Ravindra Kumar Verma, head of the Central Electricity Authority, the power ministry’s planning arm. As a result, about 25 gigawatts of coal-fired power-generating capacity is “stranded” and unused, he said. That’s equivalent to the entire installed capacity of neighboring Pakistan. 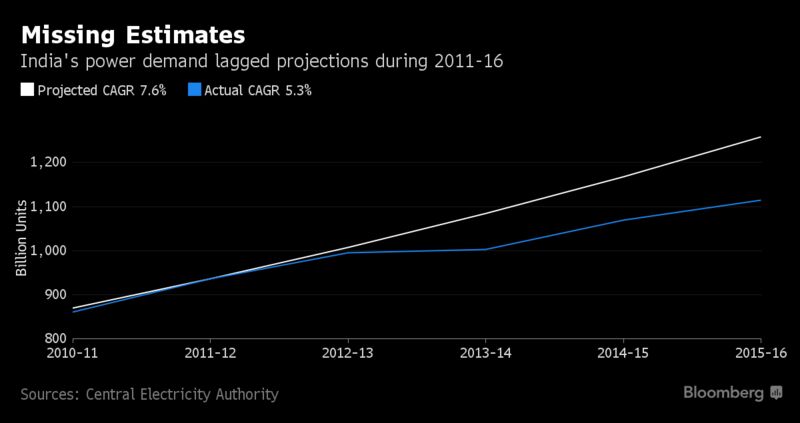 Demand growth for power is slowing as state distribution companies, known as discoms, struggle to purchase enough electricity for the populations they serve. Most discoms lose money selling below cost to poor and agricultural customers and through power theft. The CEA defines demand as the amount of electricity that distributors buy, not necessarily how much would be needed for the whole country, helping explain why millions still lack power and several cities face regular blackouts despite the under-utilized capacity.

“We were thinking that the entire demand will come on the system, but it has not happened that way,” Verma said in an interview in New Delhi on Tuesday. “When discoms turn around is the point when we will get close to 24/7 power. That’s where all the constraint lies.”

Electricity use is estimated to grow 6.2 percent a year over the six years ending March 2022. Consumption over the previous six years expanded 5.3 percent, missing a 7.6 percent forecast, the CEA said in its latest power survey report published this year. The lower-than-expected growth rate led the agency to temper its outlook, Verma said.