India’s Adani Group will proceed with its $16.5 billion Carmichael coal project in Australia’s Queensland state after its board approved a final investment decision on the development.

Adani announced the move Tuesday after last-minute delays due to uncertainty over a royalty deal with the state and amid resistance to the project because of concerns that it will damage the environment. Almost seven years after it applied for the project, contracts have been awarded for mine and rail development and pre-construction work will begin as early as July, the company said in a statement. 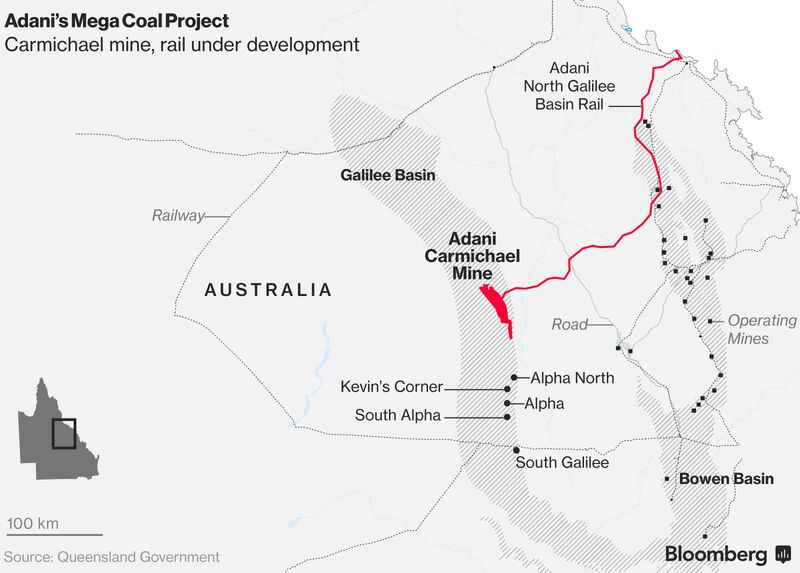 “We have been challenged by activists in the courts, in inner city streets, and even outside banks that have not even been approached to finance the project,” Chairman Gautam Adani said in the statement. “We are still facing activists. But we are committed to this project.”

Adani, which said it already invested $3.3 billion in the project with the purchase of a bulk handling terminal at Abbot Point, has faced opposition over worry that Australia’s largest coal project will increase carbon pollution and risk damage to the Great Barrier Reef marine park in northern Queensland. A $2.5 billion financing package will be completed by March, and no Australian banks have been approached, an Adani spokesman said on Tuesday.

The nation’s banks have come under increasing pressure from green groups to review their lending to fossil fuel developments, with Westpac Banking Corp. in April ruling out involvement in Carmichael. Australia’s four biggest banks likely won’t play a part in raising money for the project, according to David Lennox, a resource analyst at Sydney-based Fat Prophets.

“They will get that money externally now,” said Lennox. “They won’t raise that here in Australia. They wouldn’t have given the green light to the project if they thought funding was going to be an issue.”

The billionaire chairman of Adani said in March the company could start mining coal in 2020 from Carmichael, which will eventually create over 10,000 direct and indirect jobs. The company will coordinate development and operations from its regional headquarters in Townsville.

A deal to construct and operate the mine was awarded to Downer EDI Ltd., with a separate rail contract won by Aecom. Queensland Premier Annastacia Palaszczuk said the opening up of the Galilee Basin, where the Carmichael mine is located, could support thousands of new jobs in the state.

GVK Hancock, a venture between Indian conglomerate GVK and the Gina Rinehart-owned Hancock Prospecting Pty, is seeking to develop another mine in the Galilee, while Clive Palmer-owned Waratah Coal Ltd. is also proposing a mine in the basin.

The project, which Adani said will provide fuel to generate power for 100 million Indians, has been met with widescale protests, delaying development and prompting the company to cut underground mining capacity by 38 percent to 25 million tons a year in the first phase. Lennox of Fat Prophets said environmental groups are likely to still target the mine despite Adani’s investment approval, a major milestone that moves the project toward completion.

“Once the initial battle has been lost, sometimes there may be some dropping off of interest,” said Lennox. “But because this is such a large mine, which is going to cause environmental disruption in the region, the issues are going to remain at large for a lot of people.”

Environmental campaign group GetUp said in an emailed statement Tuesday that Adani is not prepared for the “massive backlash from Australians who understand this project is fundamentally wrong” and that it will continue its campaign against the development.

Adani has applied to tap the government’s Northern Australia Infrastructure Fund to help finance the rail portion of the project. A decision is expected later this year. Adani Enterprises Ltd., the group’s main listed unit, rose as much as 7.1 percent in Mumbai.