Reinsurance is one of the more conservative disciplines in global finance. It is also one of the most forward-looking. Insuring the insurers demands the ability to envision long-term risks, as well as implementing an investment strategy that provides the growth and liquidity to pay claims. It doesn’t sound like a fast-moving industry, but it can move decisively. A recent change in Swiss Re AG’s investment strategy is one of those decisive moves, one that highlights the insurance industry’s long-term exposure to both the causes and effects of climate change.

Earlier this month, Swiss Re announced that it has been integrating environmental, social and governance considerations “into its investment process since the start of 2017.” Taking ESG criteria into account, it says, “makes economic sense and reduces downside risks especially for long-term investors.” Swiss Re’s release says that it has selected the MSCI ESG Index “family” and the fixed-income Bloomberg Barclays MSCI Corporate Sustainability Index “as part of their ESG investing needs.”

Why does it matter? The announcement is a bit dry (it’s an asset allocation announcement from a reinsurance firm), but the numbers are not: Swiss Re had $155 billion in assets at the end of 2016, and according to Reuters, it has already moved more than $110 billion of it into ESG funds.

Europeans Are Big, But the U.S. Is Bigger

Note: OECD does not report country-level reinsurance assets for Germany or Switzerland

General insurance firms manage even more money. U.S. insurers have more than a trillion dollars in debt assets, and about a half-trillion in equities.

A Trillion in Debt Alone 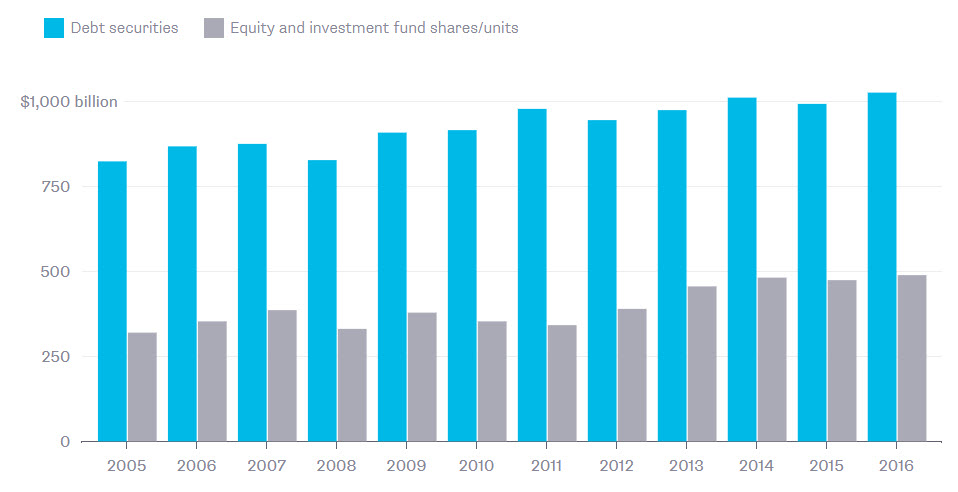 Those assets have to support a chunky payout schedule, too. Munich Re calculated the value of insured and uninsured U.S. losses to exceed $200 billion in 2005 and $100 billion in 2012 — not coincidentally, the years of Hurricane Katrina and Superstorm Sandy.

Loss events in the U.S. 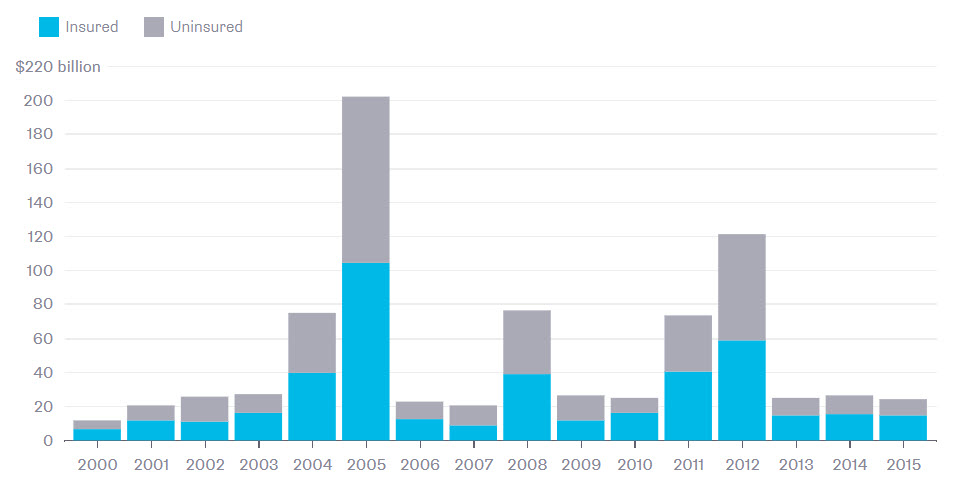 As my colleague Christopher Flavelle noted to me in a recent conversation, insurance firms are doubly exposed to climate change: They have to pay out for its effects, but if they own stocks of oil, coal and resources companies, then they are exposed to its causes as well. In some cases, they could be triply exposed: paying out for impacts on carbon-intensive infrastructure damaged by catastrophic events caused by climate change, all while holding the equity and debt of the companies that own that infrastructure. There’s even a potential reputational exposure; for example, California municipalities are suing oil and gas companies for climate-change-related damages such as sea level rise.

Swiss Re’s shift to ESG indexes doesn’t necessarily mean it will have zero fossil-fuel exposure in its portfolio, but it does mean far less. The largest single fossil-fuel-exposed debt issuance in the Bloomberg Barclays MSCI Global Corporate Sustainability Index is from French oil major Total SA (which is majority owner of the solar company SunPower Corp. and also owns a large battery maker). It is 0.056 percent of the index.

Swiss Re’s shift to indexes doesn’t make it an activist investor. Activist investors on climate change file shareholder resolutions asking companies to disclose the impacts of climate change on their businesses, or the potential impact of the Paris agreement on their future revenues. The Ceres database of climate and sustainability disclosure shareholder resolutions shows not a single insurance or reinsurance sponsor since at least 2011.

What it does make Swiss Re, perhaps, is an active reallocator that decisively moves assets away from downside risks, climate change included. If the world’s second-largest reinsurer has to be exposed to climate change in its payouts, it might as well reduce its exposure in its investments.

Europe Leads on ESG Policy, But Trend Promising for All