Is This The End of The U.S. Shale Oil Revolution?

Since 2016, Russia has aligned with OPEC and nine other non-member countries to help stabilize oil prices by controlling production. This broader OPEC+ group met in March to discuss new production cuts in light of the impacts of the Covid-19 virus on fuel demand. Saudi Arabia, the largest OPEC producer, wanted to cut production to support prices, but Russia refused as it preferred to keep prices low in the hopes of squeezing U.S. producers and boosting its market share. Saudi Arabia retaliated by reversing course, committing to increase its own production and drive prices further down.

Unlike the Last Time

OPEC tried before to flood the market and price U.S. operators out. In 2015, as now, prices dropped and U.S. production did fall. However, U.S. output rebounded within a few months as shale producers became more efficient, and by the time OPEC reined in supply to support prices, the U.S. was even better positioned than before.

Conditions are different this time. Shale oil output has almost doubled since 2016, and due to the steep production decline of wells, constant activity is required just to keep production flat. Wall Street may now be reluctant to fund shale producers after years of overspending and low returns. In 2016, upstream operators issued $35 billion of equity. By 2019, this equity issued had fallen to $1 billion. And today’s producers are leaner, with less room to improve operations and reduce costs. In light of this, BNEF estimates that producers in the Permian, the U.S.’s largest shale play, need $47 oil to break even. 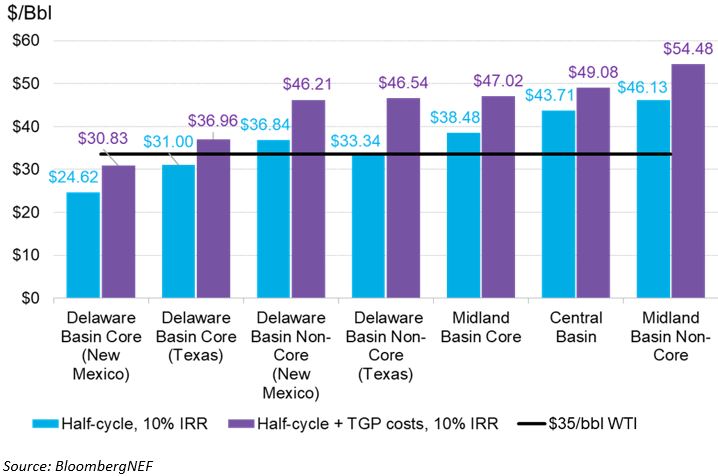 If prices remain near $30 and drilling activity drops in proportion to prices, U.S. output could fall by over 1 million barrels a day by year end, some operators may struggle to survive, and the spillover could impact the broader economy. 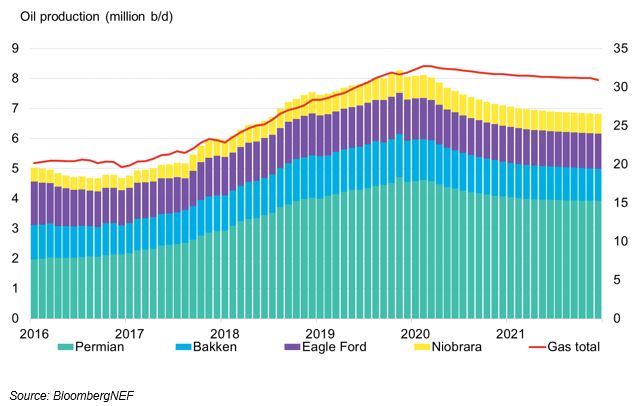 For more details on BNEF’s analysis on the cost of U.S. production, BNEF clients have access to the full report: “Profitability Gone for Permian Oil here.

For more research, data and news on the oil price collapse, including on-demand-webinars, Bloomberg clients can access OILS<GO> on the Bloomberg Terminal.