Lights Out? Now Australia’s Got a Coal Shortage

The world’s second-biggest seller of liquefied natural gas is already threatening producers with export curbs as it struggles to find enough supply for its own use. Now the country that ships more thermal coal overseas than almost any other is scrambling to replenish stockpiles at some power plants after they dwindled following a surge in demand and constrained supply.

It’s the latest twist in the saga of how a global energy powerhouse is struggling to sustain reliable and affordable electricity for its own population. Power price spikes and gas shortages have already frustrated businesses and homes across the nation and put pressure on the government and generators to prioritize domestic customers over sometimes more lucrative export markets. 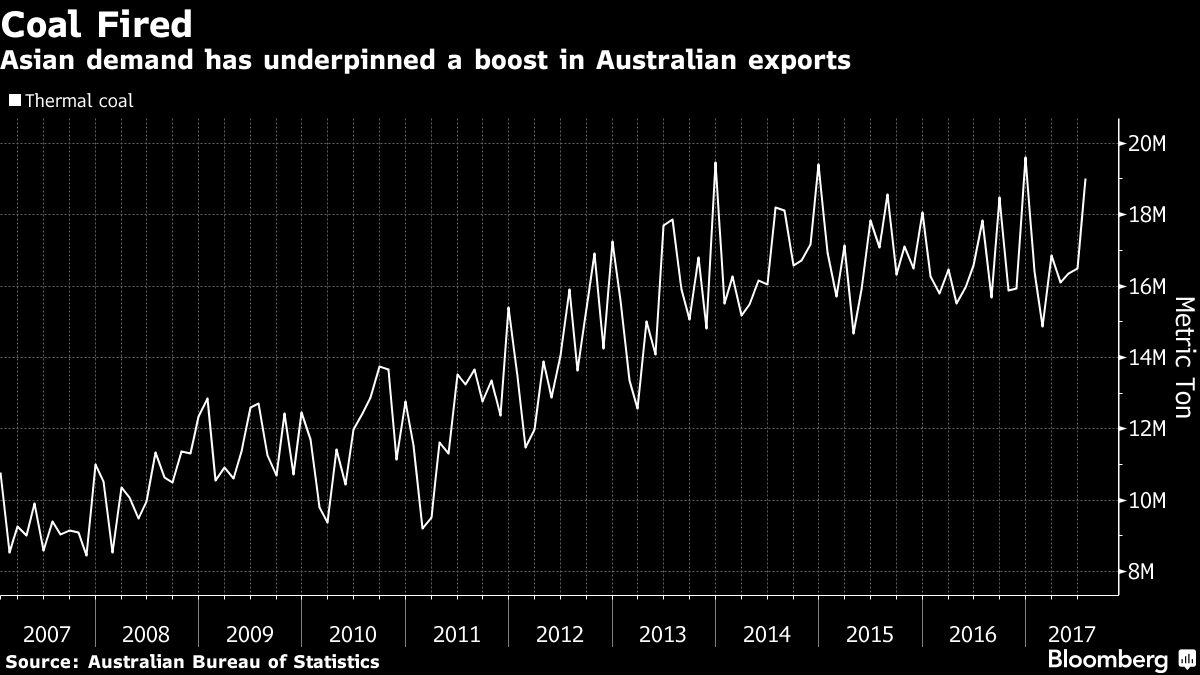 Coal inventories at Australia’s three largest electricity providers — AGL Energy Ltd., Origin Energy Ltd. and CLP Holdings Ltd.’s EnergyAustralia — have shrunk over winter as they use more of the fuel to compensate for natural gas shortages. The closure of the Hazelwood coal-fired power plant in Victoria state also put further pressure on the nation’s remaining generators to produce more power, eating through their stockpiles at a faster pace.

Against this backdrop, the power producers have struggled to get sufficient supplies as they compete with overseas buyers for lower-quality coal that was once considered too poor to export. Miners in Australia can command higher prices for coal known as high ash in China, South Korea and India.

“The high ash market has developed in North Asia over a number of years and that has caused complications for some power stations,” said Robin Griffin, a research director at Wood Mackenzie Ltd. in Brisbane. “It means that miners can actually sell a much lower quality product into the export market.”

Griffin estimates miners can probably sell coal to international customers at double the price sold to domestic utilities. Australia exported 116.1 million metric tons of thermal coal during the first seven months this year, compared with 114.4 million in the same period last year, according to government data.

“The local power producers have got a set delivery amount and they may be asking for more coal,” he said. “It’s going to be very difficult to convince miners to sell coal at a lower price to domestic utilities, it’s just a no-brainer.”

Strong Chinese imports and the price gap Australian producers can achieve by exporting coal rather than selling to local plants was a factor contributing to low stockpiles, according to Gavin Wendt, a senior resource analyst at MineLife Pty.

Australia has been scrambling to find additional sources of electricity since the national market operator said in March that gas-fired power shortfalls may be possible next year. The warning spurred Turnbull to propose rules to restrict gas exports in the eastern state of Queensland amid concern outbound shipments had contributed to supplies being crimped and a tripling of Australia’s wholesale gas price in the past two years.

Coal accounts for 76 percent of Australia’s power generation. Stockpiles at AGL’s Liddell and Bayswater plants in New South Wales state fell to “historic lows” over winter as consumption rose due to limited natural gas supplies and the loss of power from the Engie SA-owned Hazelwood, an AGL spokesperson said in an emailed statement. International coal demand has also placed pressure on the rail lines that thread through the Hunter Valley region of the state, adding to constraints.

EnergyAustralia and Origin have struggled to procure sufficient quantities of the fossil fuel. The Mt Piper power station, which supplies 15 percent of electricity demand in New South Wales, only has stockpiles to operate at “very low production levels” for a few months due to a legal dispute impacting mine supplies, EnergyAustralia said in an emailed statement.

Origin said its Eraring power station in the state “ran very hard” to meet demand over winter that created an issue with coal stockpiles, which now “needs to be managed.” It has since sourced additional supply to replenish stocks and expects record coal to be delivered by rail to Eraring in September, according to Origin’s general manager for energy supply and operations, Greg Jarvis.

The New South Wales government is working with the Australian Energy Market Operator to ensure there is sufficient fuel supplies this summer while also looking at how it may reduce demand on the power grid during heatwaves.

“There are many parallels with what is happening in the gas space and what’s happening in the coal space right now and I think it’s taken the market by surprise,” MineLife’s Wendt said in an interview Wednesday.