The journey to net-zero emissions could see the fundamentals driving natural gas demand change by 2030. With the long-term role of gas in a low-carbon world still unclear, infrastructure owners and operators need to make sure that they are prepared for the energy transition.

A new report from BloombergNEF looks at the operators of liquefied natural gas (LNG) plants, scoring the transition readiness of the portfolio of LNG assets that these companies operate. It finds that local LNG producers hold an advantage over major international players. 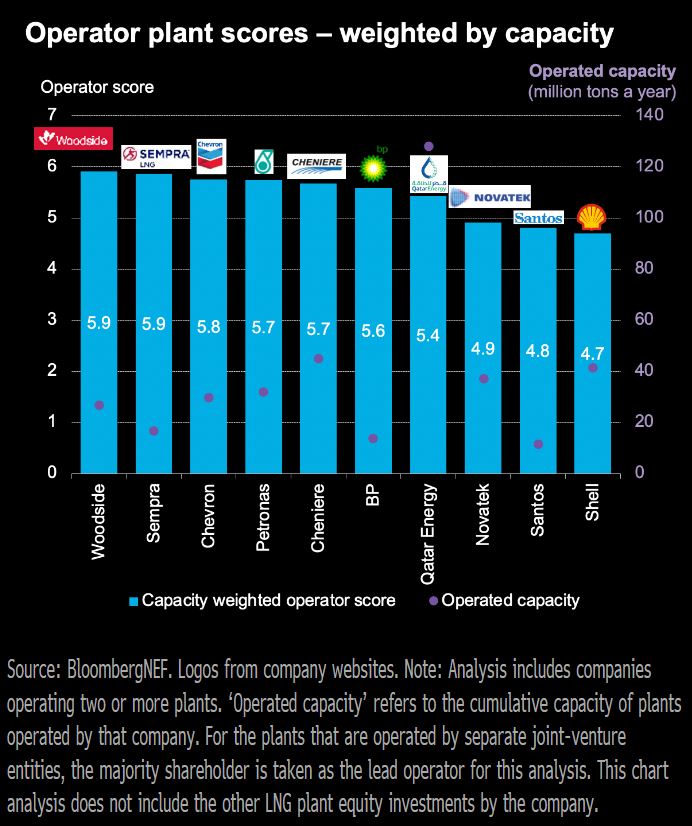 Woodside Petroleum and Sempra Energy have the highest LNG operator scores in BNEF’s ranking, scoring 5.9 out of 10. This is driven by a high degree of net-zero alignment across their plants’ equity holders, customers and host country governments, which provides the impetus needed to adopt decarbonization initiatives.

For example, Woodside announced last year that it would target net-zero emissions from its entire Pluto LNG facility by 2050. The move was in response to the Western Australian government making this a condition for approval of the company’s Scarborough and Pluto Train 2 development.

While Cheniere Energy, Qatar Energy and Russia’s Novatek have not announced net-zero targets, the LNG plants they operate still show a high level of transition readiness. These plants benefit from largely lower-CO2 upstream gas supply and are adopting, or at least considering, various clean power solutions and carbon capture and storage (CCS). Qatar Energy and Novatek’s overall scores are currently getting pulled down by their Golden Pass and Arctic LNG 2 facilities, which are under construction.

Among the international oil company (IOC) operators, Chevron comes out on top with a score of 5.8 out of 10. The CCS operating at its Gorgon LNG facility in Australia is a differentiating factor, as well as efforts to provide emissions statements, which are seen as a benefit that applies to both plants it operates. Chevron may have scored better than Woodside and Sempra, if it weren’t for its majority stake in Angola LNG, which shows few signs of intent to decarbonize.

BP is the runner-up among IOCs. Despite its CCS proposal for the Tangguh LNG facility in Indonesia, its majority stake in Tortue FLNG pulls its operator plant portfolio score down due to a lack of low-carbon solutions.

Rival Shell ranks comparatively poorly among the IOCs with an operator score of 4.7. Although it is the lead-operator for the greatest number of plants, not all of the company’s LNG plants look transition ready. Shell’s best scoring asset, LNG Canada, is not enough to offset the low transition readiness and limited methane control for Atlantic LNG and its plants in Africa.

The results of BNEF’s LNG operator plant rankings differ from those of its Oil and Gas Transition Scores, in which Shell and BP both scored highly. While these oil and gas majors appear to be better prepared for a low-carbon world in terms of their wider business strategies, they are involved in LNG assets that sit lower on the transition readiness curve. 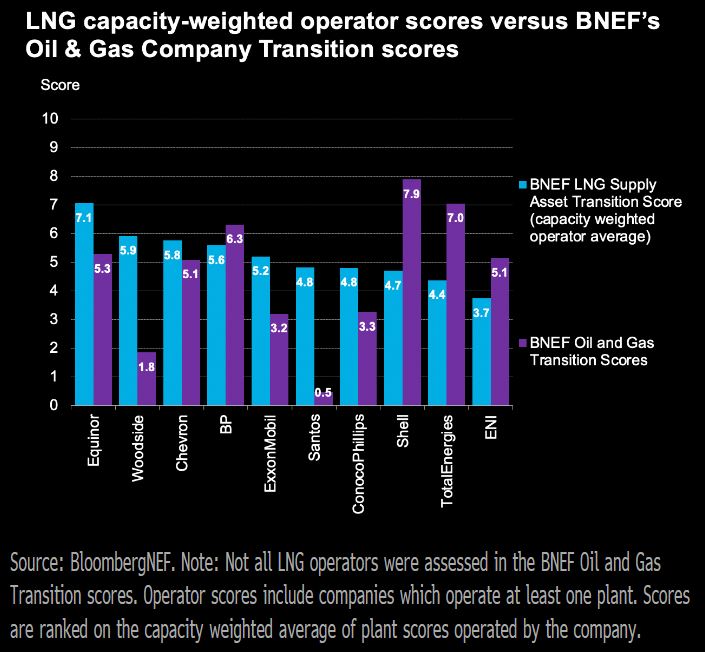