About 400 miles east of Houston, off the coast of Alabama, Dauphin Island was spared the initial impact of Hurricane Harvey. Yet this tiny sliver of land near the mouth of Mobile Bay is just as important as the battered metropolis to the debate over American disaster policy. That’s because the 14-mile-long island, home to only about 1,300 people, floods again and again, hurricane or no hurricane. And again and again, those homes are repaired and rebuilt, largely at the expense of U.S. taxpayers.

The homes on Dauphin Island are among the 5 million that are covered by the National Flood Insurance Program. Founded in 1968 to make sure homeowners in flood-prone areas could get affordable insurance, the program ends up paying most residential flood insurance claims in the U.S. Partly as a result, development along coasts and riverbanks and in flood plains has exploded over the past 50 years. So have claims for flood damages. The NFIP is now about $25 billion in debt. 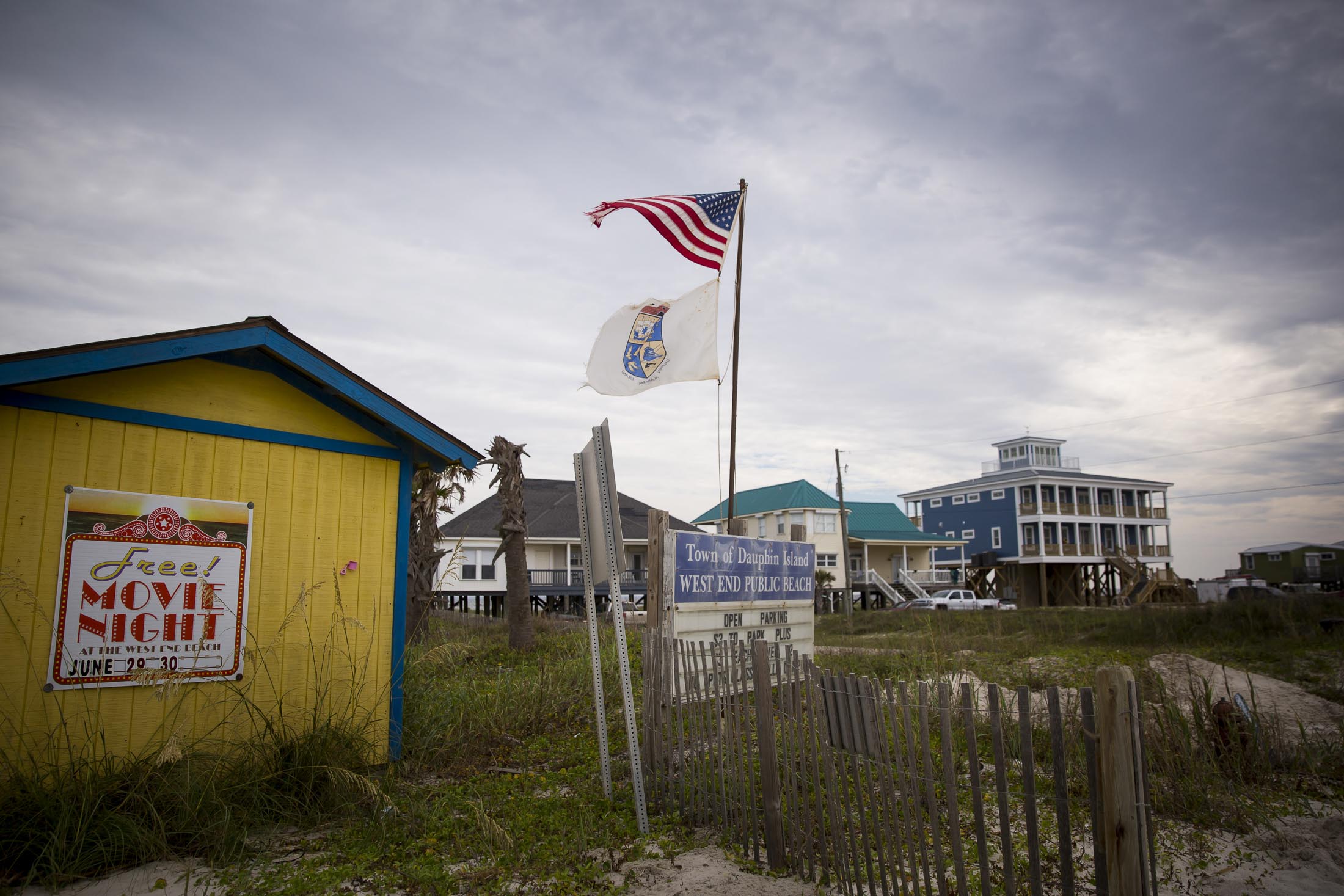 Houses along the flood zone on the west end of Dauphin Island on June 28. Photographer: Nicole Craine/Bloomberg

On Sept. 30, the program is also set to expire. Some members of Congress would like to use a reauthorization vote to enact reforms, including perhaps kicking the most flood-exposed homes off the rolls. Given the pressure to deliver disaster relief quickly post-Harvey, it’s improbable that any initial agreement to extend the NFIP past Sept. 30 will lead to significant reforms. More likely, a short-term extension may fund it through the end of the year. But the problem won’t go away. And the debate is just getting started.

The issues surrounding the NFIP go beyond just insurance and straight to the costs of climate change—specifically, whether the government will concede that the most vulnerable places simply can’t be protected. While hurricanes contribute greatly to costs, putting a sudden spotlight on the insurance issue, it’s the chronic flooding that happens away from the public eye, in places such as Dauphin Island, that slowly drains the NFIP. The island has one of the country’s highest concentrations of houses that the Federal Emergency Management Agency calls “severe repetitive loss”—those that flood most often. The owners of those 84 properties have gotten almost $17 million since 1978, an average of $199,244 each.

While many areas that depend on flood insurance are poor, the overwhelming majority of buildings on Dauphin’s most vulnerable beaches are vacation homes and rentals. When Texas Republican Jeb Hensarling, chairman of the House Financial Services Committee, argued this year against single mothers being “forced to pay for insurance for some millionaire’s beachfront vacation home,” he could’ve been talking about this town. 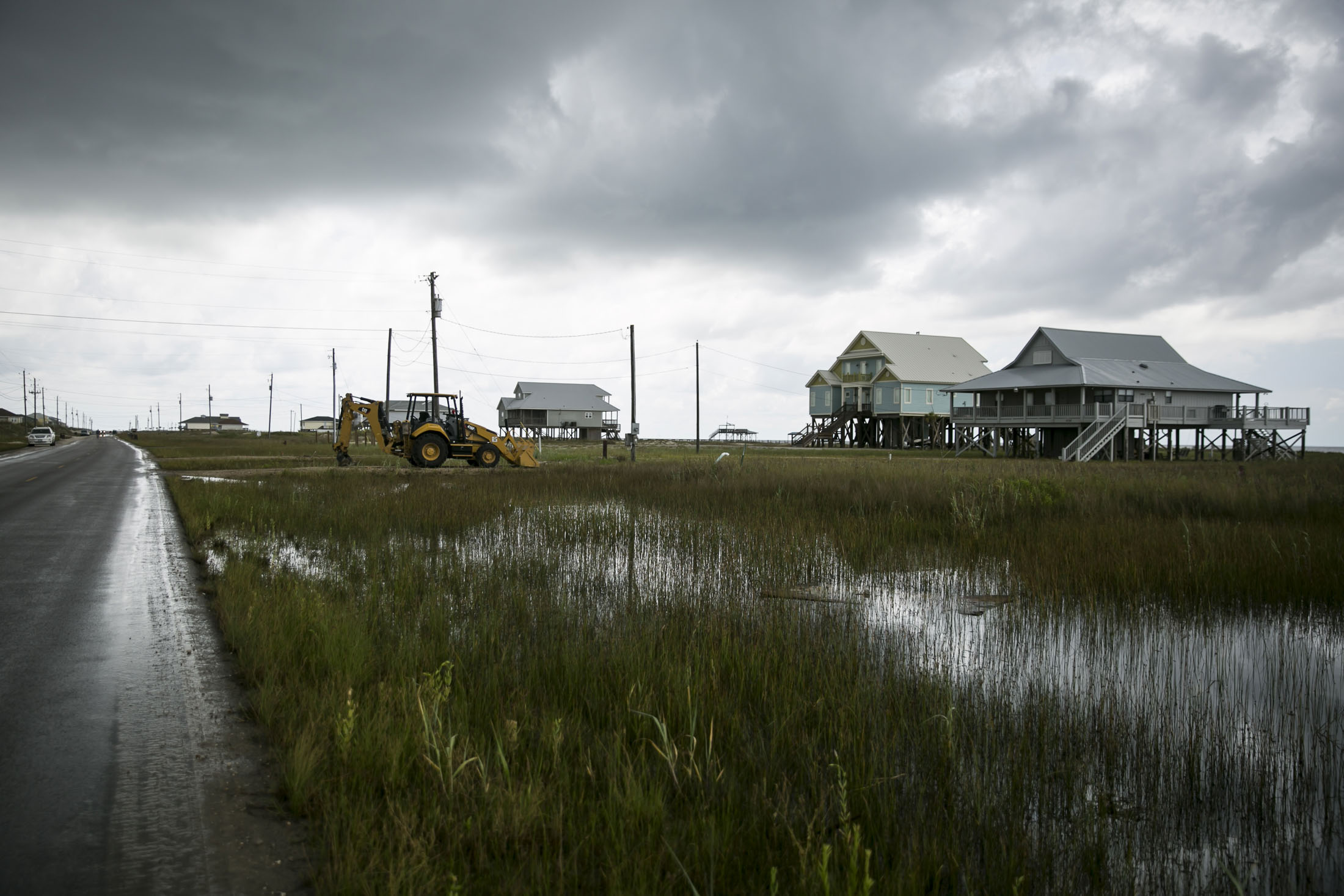 Federal payments to places such as Dauphin Island can seem like a reward for stubbornness. In 1979, Hurricane Frederic destroyed the only bridge to the island; in 2004 and 2005, Ivan and Katrina wiped out about 500 homes. Federal funds replaced the bridge and the houses. But officials on the island argue they’ve been left behind, getting just enough money to limp along but not enough to survive the next big storm. After Sandy, Washington agreed to spend almost $1 billion to fortify a single stretch of the New Jersey shore with dunes. Jeff Collier, mayor of Dauphin Island, would like the same treatment. “Nobody’s ever come in and forced sand down my throat,” he says. “I wish they would. Why are we more expendable than anybody else?”

As climate change worsens, it’s getting harder for Congress to pretend there’s enough money to save everyone. John Kilcullen, Mobile County’s director of plans and operations for emergency management, says he thinks the best way to stop history from repeating itself on Dauphin is for the federal government to buy houses and tear them down, especially along the island’s low-lying western section—the same stretch that boasts the biggest, most expensive properties. He’s pessimistic about how many of those homeowners would be willing to sell. “People don’t like being told they can’t live somewhere,” Kilcullen says. “I don’t think it’s politically feasible.” 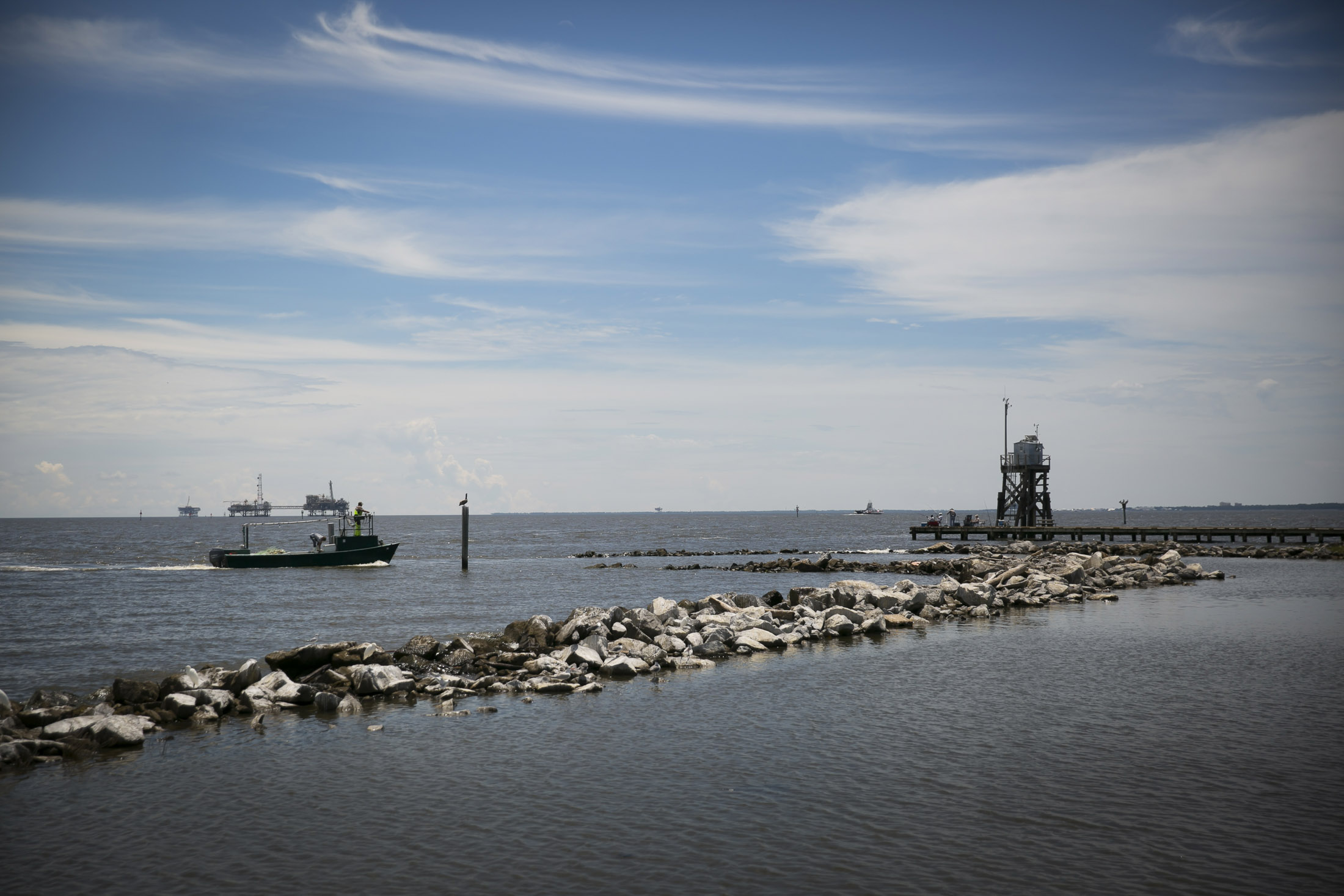 The waterfront outside of Dauphin Island Sea Lab and Estuarium. Photographer: Nicole Craine/Bloomberg

Explosive costs have a way of changing people’s minds. The U.S. spent more than $350 billion over the past decade responding to natural disasters, yet FEMA budgeted only $90 million this year to prepare communities for those catastrophes. “These storms are breaking the back of FEMA,” says Roberta Swann, director of the Mobile Bay National Estuary Program. “If FEMA starts to say, ‘If a hurricane comes and takes your house, we’re done’—that is going to change the face of coastal communities.”

And yet, if the U.S. wants to stop racking up taxpayer-funded losses, those communities do have to change. The NFIP paid out about $16.3 billion after Katrina in 2005 and $8.4 billion for Sandy in 2012, according to the Insurance Information Institute. That same year, Congress passed a law that overhauled the program, making it significantly more expensive to insure a home in a flood-prone area. The law, known as the Biggert-Waters Flood Insurance Reform Act of 2012, was the product of a rare alliance between environmentalists and Tea Party activists. After it went into effect, some coastal homeowners saw their annual flood insurance premiums spike to $20,000 or more from as low as $600. Two years later, as opposition grew, Congress rolled back most of the reforms. 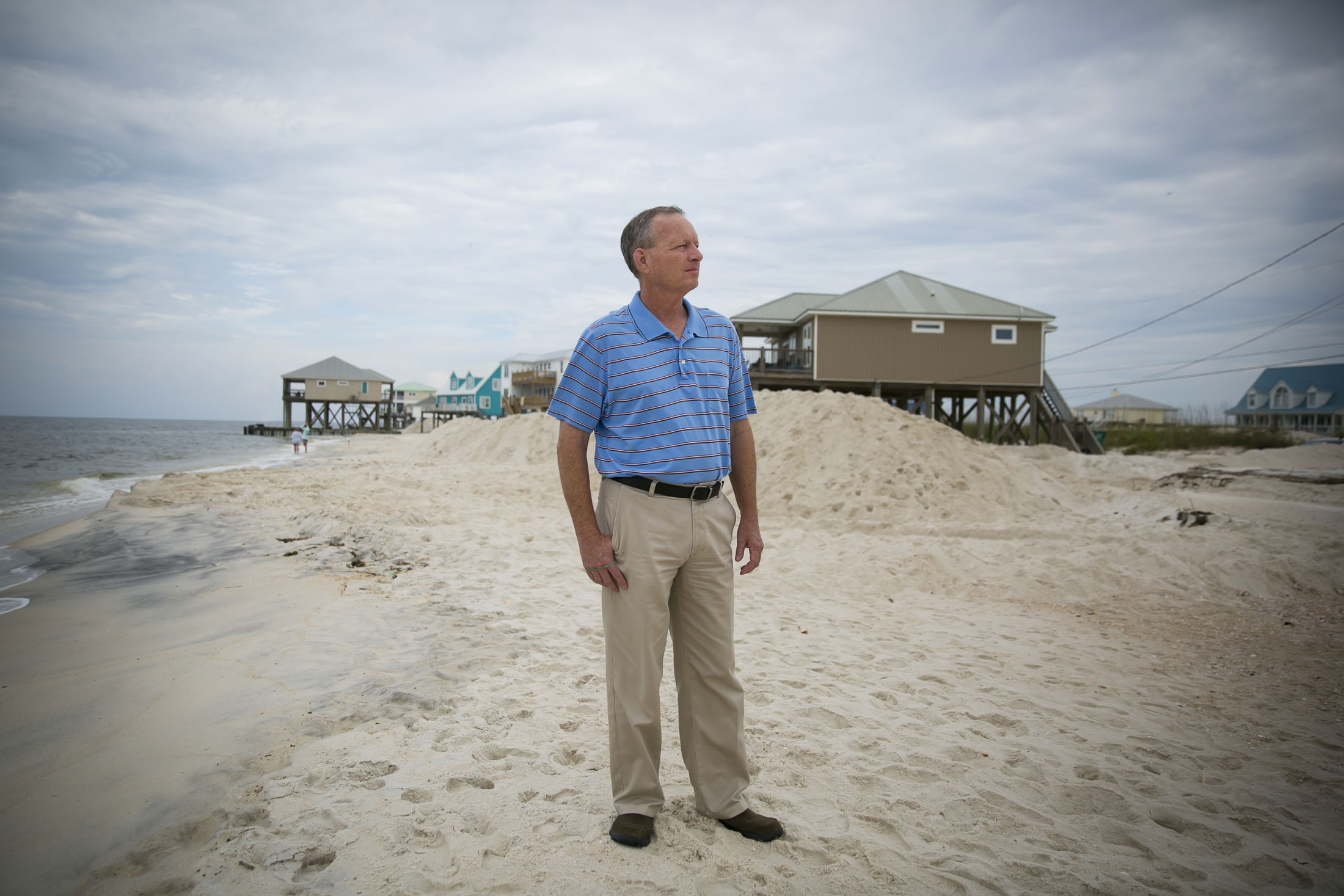 “Nobody’s ever come in and forced sand down my throat,” says Dauphin Island Mayor Jeff Collier. “I wish they would. Why are we more expendable than anybody else?” Photographer: Nicole Craine/Bloomberg

Last year theNatural Resources Defense Council won a lawsuit seeking to uncover how many homes FEMA has designated severe repetitive loss. The data the agency was forced to release showed that about 30,000 properties had cost taxpayers $5.5 billion since 1978. “Repeatedly flooded properties cost the nation billions in avoidable losses and repeated trauma to the families that live there,” says Rob Moore, a water-policy expert at the council. “We should be offering assistance to move to higher ground before they run out of options, not after.”

In 2016, FEMA bought 960 severe repetitive loss homes to tear down; at that rate, it would take until midcentury to buy all 30,000. By then, as many as 265 towns and cities will suffer what the Union of Concerned Scientists in a July report called “chronic inundation”—flooding that covers at least 10 percent of their land an average of twice a month. “The human inclination to stay in place, and to resist change at all costs, is pretty strong,” says Erika Spanger-Siegfried, an analyst at the Union of Concerned Scientists and a lead author of the report. “It will catch up with those locations,” she says, “and they will need to move eventually—but at a greater cost.”

On Dauphin Island, beachfront homes are still going up. Yet some residents may be ready to leave. After Katrina, 35 homeowners applied for federal buyouts, says Mayor Collier, but none were approved. If the government doesn’t either buy out homes or fortify the beach, it will just cost more when the next hurricane hits, Collier argues, while standing amid homes under construction. Bobcat loaders zoom by, returning sand blown off the ever-shrinking beach. “Pay me now,” he says, “or pay me later.”