Miners Begin Cleaning Up Their Act With Renewables

Cleaning up their act

The mining industry faces an interesting paradox. It is the lynchpin of the transition to a low-carbon economy, providing the materials that go into new grids and electric vehicles, yet miners’ extraction processes gorge on large amounts of power. Miners account for 6% of the world’s energy demand, and meet most of it with fossil fuels.

Miners, which account for 22% of global industrial emissions, are facing more pressure to decarbonize than ever before – from investors, customers in the technology and auto industries, and even consumers further downstream. Companies recognize the risks to their operations from climate change, and continue to reaffirm their commitment to sustainability. Some 21 mining companies, including Glencore, Rio Tinto, BHP, Vale and Anglo American, are members of the Task Force on Climate-related Financial Disclosures, or TCFD. This means their financial reporting discloses risks and opportunities from climate change. The next step for many of these companies is implementing changes to drive direct decarbonization – a daunting task. 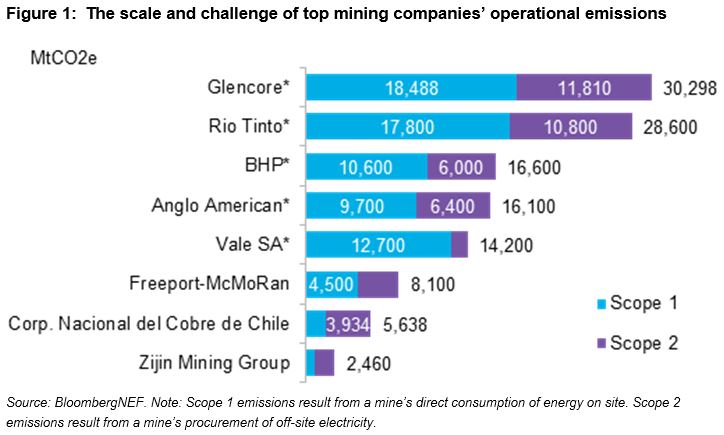 But things are starting to change, and fast

Mining companies have seen that part of the solution lies in tapping into renewables. Clean energy procurement by miners has accelerated to unprecedented levels in the last two years, as the drop in the cost of wind and solar power has made this an increasingly attractive pathway to decarbonize operations. Miners have contracted for 5.9GW of clean energy in the last decade – three quarters of which was signed up in the past two years.

Big conglomerates have been driving this activity, such as BHP, which last year said renewables will power 100% of its largest copper operations in Chile by 2025. Rio Tinto has similar ambitions, announcing a plan last month to invest $1.5 billion to reach net-zero scope 1 and 2 emissions by 2050. 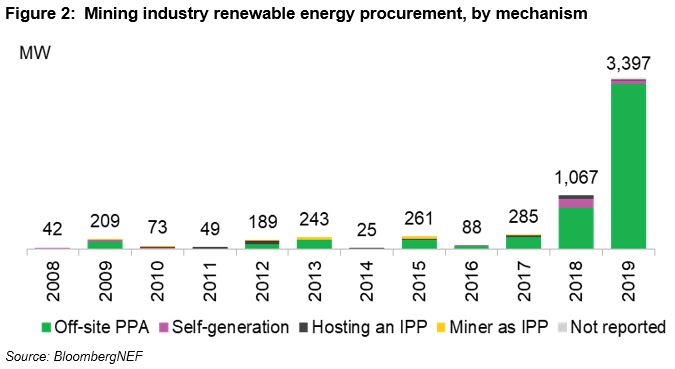 A long way to go

Despite this momentum, solar and wind are still just a small fraction of the energy used by the industry today. Miners have been much slower in adopting renewables than other corporates. For instance, Google alone has procured more clean energy than the entire mining sector in the last decade.

Investors will play a big role in accelerating activity. The sustainable debt market is now worth more than $1 trillion, with major asset managers and institutional investors like Blackrock committing to divest from companies that are not aligned with a low-carbon transition. Increasingly, mining companies have to engage in decarbonization in order to access capital.

What does the path for 100% clean energy in the mining sector look like?

Solar and wind are the cheapest forms of new generation capacity in two-thirds of the world. This means miners can negotiate off-site, long-term power purchase agreements, or PPAs, at lower prices than thermal generation. It also allows them to sidestep the volatility of energy markets.

PPAs are the preferred clean energy procurement mechanism for miners. Many deals are structured as so-called sleeved contracts, in which a utility or energy retailer pulls from a portfolio of clean-energy projects to deliver round-the-clock electricity to mines. This model has proven effective in Chile, the leading country for renewable energy in mines. It allows companies like BHP or Anglo American to meet 100% renewable energy targets without forfeiting reliability.

Alternatively, miners can also install renewables on site at their operations. Mines could save up to 25% of their total electricity costs by leveraging solar, wind, or batteries on site, according to BNEF models. On-site renewables will appeal to mines where grid or fuel access is difficult, expensive, or unreliable – a common theme in markets like South Africa, Zimbabwe and Australia.