Tesla Inc. is about to enter the road through hell, and it’s paved with intentions to make a whole lot of electric cars.

That’s how Elon Musk describes the task of meeting the lofty targets he’s set for the Model 3, a cheaper sedan that the future of his company rides on. Demand won’t be an issue — reservations for the car now exceed 500,000, according to the Tesla chief executive officer. The herculean undertaking ahead will be to produce the vehicle at a scale the automaker has come nowhere close to achieving to date.

“Frankly, we’re going to be in production hell,” Musk told a crowd of hundreds of Tesla employees Friday behind its assembly plant in Fremont, California. “That’s going to be where we are for at least six months, maybe longer.”

For Musk, making affordable cars at levels of scale that would further drive down the costs of electric transportation would mark the culmination of a master plan he sketched out for Tesla more than a decade ago. The progress he’s made thus far in executing that vision has catapulted his company’s market capitalization past carmakers that have been around more than a century, including Ford Motor Co. and General Motors Co.

Musk has kept investors enamored despite manufacturing hiccups that have regularly bedeviled Tesla. The production shortfall of new, bigger battery packs that the company cited when reporting underwhelming sales figures earlier this month was just the latest example.

Avoiding setbacks won’t get any easier. The Model 3 will be built with 10,000 unique parts, and its production rate will be dependent on both a global network of components suppliers and Tesla’s own battery gigafactory keeping up the pace.

“Almost anything that goes wrong anywhere in the world, if we haven’t buffered the supply chain, will interrupt the production progress,” Musk said. “Any one of them can slow down the process.”

Tesla’s CEO nonetheless is standing by Model 3 production plans, including making 20,000 a month in December. The first 30 customers — who are company employees — took delivery Friday at the factory in Fremont, the carmaker’s lone auto assembly plant. 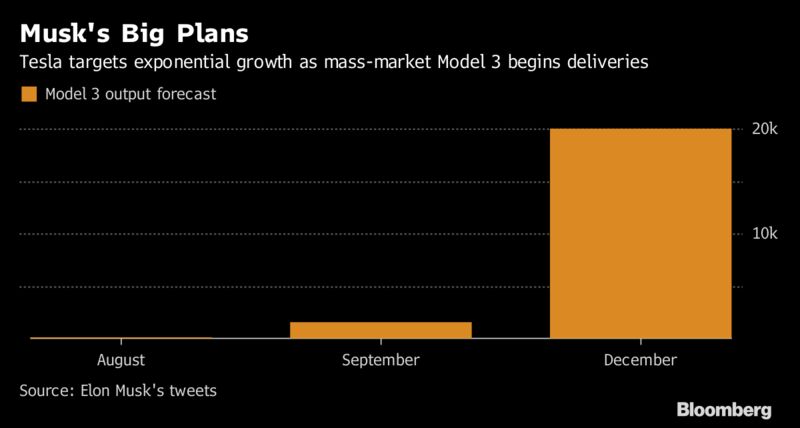 After reaching a production rate of 20,000 Model 3 cars a month sometime in December, Tesla’s planned manufacturing ramp up will be even more dramatic. Musk wants to make 500,000 cars in 2018, then a million in 2020.

“The rate of the Model 3’s production ramp up has never been accomplished, even by high-volume automakers with far more experience,” Karl Brauer, executive publisher for Kelley Blue Book and Autotrader, said in an email. “Musk’s fans already see him as genius inventor Tony Stark. A year from now, if he hits the goal and is selling half-a-million cars to overwhelmingly satisfied customers, even the skeptics might dub him Iron Man.”

Tesla has dramatically simplified its manufacturing processes, Musk told reporters before the event Friday, to where the same factory space where it can build 50,000 Model S sedans or Model X sport utility will be able to produce 200,000 Model 3s.

“The key fundamental question is whether Model 3 can be delivered in volume, at decent margins and with good quality,” Toni Sacconaghi, a Sanford C. Bernstein analyst, wrote in a note to clients Thursday. “Tesla has an established pattern of over-promising and under-delivering on the timing of key achievements.”

The Model 3 will start at $35,000 for 220 miles of range, with a bigger battery version selling for $44,000. The pricier version will be capable of 310 miles of driving between charges. Deliveries of the more expensive sedan will start first, with those of the base car beginning in the fall.

Add an upgrade package that includes a tinted roof, plus heated and power seats, a paint color other than black, bigger wheels, the autopilot driver-assistance system and a future upgrade to full self-driving capability, and a fully optioned Model 3 will cost $59,500.

The base Model 3 will face off against a fierce competitive set of entry-level luxury sedans from the likes of Audi, BMW, Lexus and Mercedes. While Tesla fans object to the idea that those brands’ future electric offerings will pose a threat, Barclays auto analyst Brian Johnson advises against counting them out.

“No doubt the premium carmakers need to play a better PR game vs. Tesla,” Johnson wrote in a note to clients Friday. “We think the traditional auto industry is fighting back and will have the ability to make profitable, electrified vehicles on a five-year view.”