While adoption of electric vehicles is increasing in markets like Europe and China, consumers will need to dramatically accelerate their shift away from petrol and diesel cars for the global passenger fleet to reach zero tailpipe emissions by 2050.

Yet solving the climate crisis may not be as simple as switching from one drivetrain to another. Mobility habits will also likely have to be reshaped in order to fully decarbonize the road transport sector, and this could entail some people giving up vehicle ownership altogether.

To reach a world in which there are no internal combustion engine vehicles left on the road by mid-century, BloombergNEF estimates annual EV sales must hit a peak of more than 138 million units in 2040, up from just 6.6 million in 2021. That’s according to the Net Zero Scenario in BNEF’s new Electric Vehicle Outlook, assuming vehicle usage patterns and retirement rates remain roughly consistent over the coming decades. 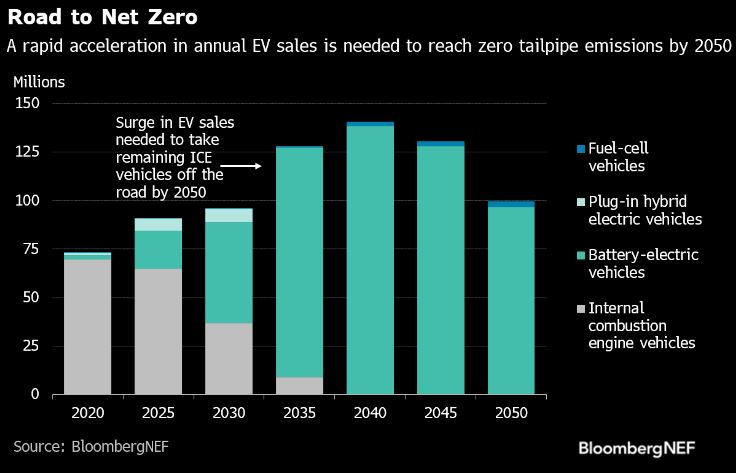 Building supply chains and infrastructure capable of supporting such as high level of EV sales is a daunting task. Battery material sourcing, battery making facilities, EV manufacturing capacity and charging infrastructure deployment will all require significant expansion. But such investments may not end up being economically viable if global sales end up dipping below 100 million vehicles per year again, as modeled in the Net Zero Scenario.

One potential solution to this dilemma is to curb demand for passenger cars. This can be achieved in a variety of ways, including greater levels of urbanization, increasing the cost of car ownership, and encouraging a shift to other modes of transportations such as public transit or bicycles.

Under BNEF’s base-case Economic Transition Scenario — in which EV adoption is driven by techno-economic trends and market forces rather than new policies — the global passenger fleet reaches around 1.4 billion vehicles in 2050. This includes both internal combustion engines and zero-emission cars.

However, if demand for passenger vehicles were to decline such that the fleet only reaches 1.2 billion cars in 2050, this would avoid 2.5 gigatons of CO2 from being emitted. It would also eliminate the need for $85 billion of battery and EV manufacturing capacity, and forgo the consumption of 343 terawatt-hours of electricity — more than the total power generation of the UK in 2020. 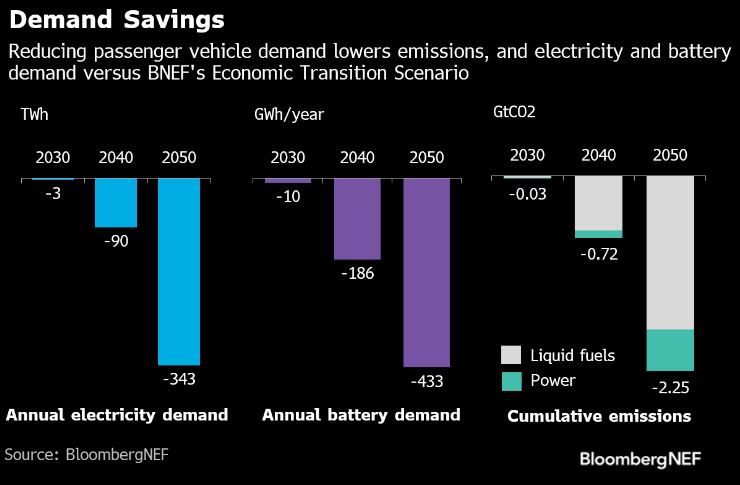 The share of ground passenger travel completed by car varies significantly by market. Light-duty vehicles accounted for over 90% of passenger kilometers traveled on the ground in the US in 2017 and more than 70% in many European countries such as Germany and Italy. 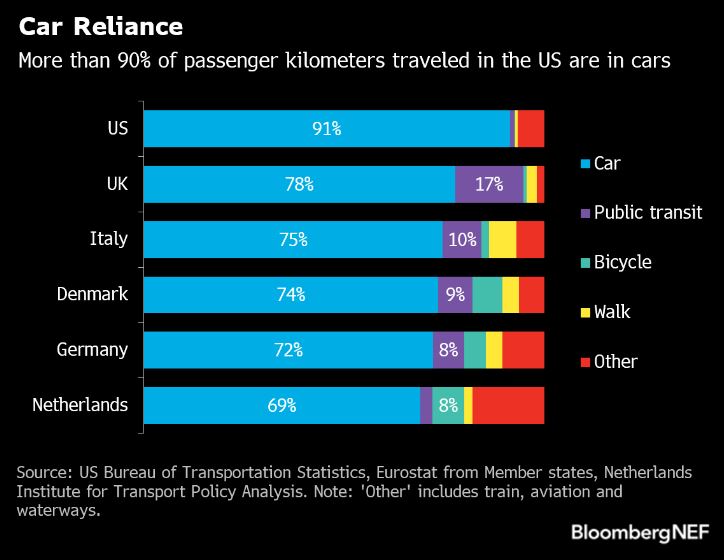 The disparity means some regions have a larger opportunity to shift people away from car use. But at the same time, these countries may face a more difficult challenge in overcoming cultural factors, such as vehicle ownership being perceived as a measure of success. It is also possible that policies are more effective at reducing the number of vehicles held by multi-car households than single-car households.

Some demand-side reduction pathways have more potential than others, and many are likely to be politically contentious. Governments will need to employ both incentives and disincentives to effectively reduce passenger car usage, and money spent on changing the mobility demand curve could be highly effective at reducing emissions.

Industry stakeholders may find it counterintuitive to support policies which aim to reduce the usage of the products they sell. However, over a multi-decade time horizon, altering the mobility demand curve could prevent sharp swings in new vehicle sales as governments pursue zero-emission capable fleets.