Then we have the Paris Agreement, which commits signatories to limit global warming to well below two degrees Celsius above pre-industrial levels, aiming at 1.5 degrees. Glasgow, in Scotland, will host the 26th Conference of the Parties, or COP26, to the United Nation’s Framework Convention on Climate Change, known as the UNFCCC in November. This will be the first opportunity to discuss the climate plans of individual countries following the submission deadline for National Determined Contributions, or NDCs, in 2020.

The term net-zero is often used to refer to 1.5-degree climate targets. However, the two are different. The climate is sensitive to the cumulative volume of greenhouse gases in the atmosphere, and not so much the emissions in any one year. Reducing emissions faster early on will result in less cumulative emissions and therefore a greater chance of achieving a 2-degree or 1.5-degree climate target. A slower start over the next decade will mean greater cumulative emissions in 2050, and far less chance of keeping climate change to two degrees or less. To be more exact, the world can emit between 420 gigatons and 1,170 gigatons of carbon dioxide cumulatively from 2018 for a 67% chance of limiting global warming to between 1.5 and 2 degrees Celsius above pre-industrial levels, according to the Intergovernmental Panel on Climate Change’s Special Report on Global Warming of 1.5°C, published in 2018.

We can put this another way. Based on current emissions trends, we are on track to run out of emissions budget to stay within 2 degrees of warming in 2044, and by 2028 we will have exhausted the emissions budget to stay within 1.5 degrees. This underlines the need for immediate, concrete policy action to accelerate decarbonization today: achieving mid-century climate goals will not be sufficient, unless intermediate milestones are also hit.

Delaying meaningful abatement until after 2030, for example, forces very rapid emissions reduction in later years. This may even make it necessary to get to net-zero earlier than 2050 to keep temperature increases well below two degrees. On the other hand, a more rapid initial decline and a longer, flatter tail may ensure we get closer to a 1.5-degree climate target. To be sure, this may imply moving faster than supply chains, public policy, and public sentiment can manage. 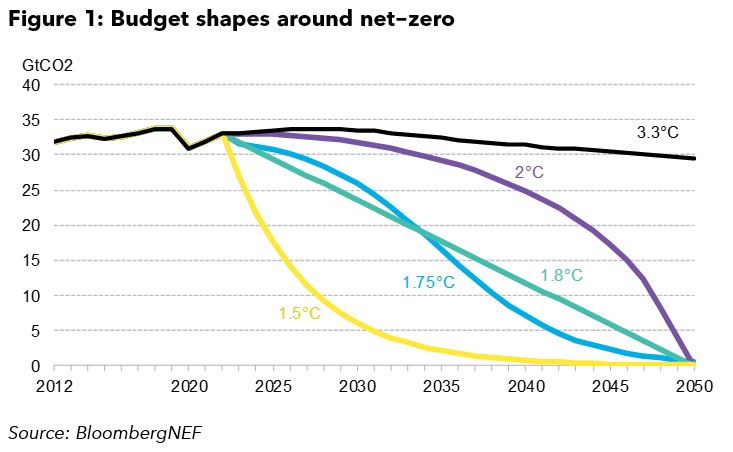 So what might intermediate milestones need to look like in order to achieve net-zero emissions by 2050 and achieve the Paris Agreement? And how can we divide the effort between different parts of the economy? To help answer this, we have constructed a series of sector emissions budgets.

While there is no single answer, we have applied three principles to do this:

The result is three distinct groups:

Adding these sector curves together suggests emissions need to fall by 30% to get on track by 2030 and decline overall by 6% a year to 2040. If achieved, this orderly transition would reach zero emissions in 2050 and achieve the Paris Agreement objective, with climate change of about 1.75 degrees Celsius by 2100.

Based on these budgets, the power sector does much of the heavy lifting this decade, with emissions down 57% by 2030 from 2019 levels. Commercial buildings are down 20% and road transport 11%. Rail emissions decline 41% but from a low base. Harder-to-abate sectors, such as shipping, steel and chemicals, see small emissions reductions over the next decade as current growth levels off. Aviation stands out both because it is the sector where emissions grew fastest to 2019, and because it is the sector most affected by the Covid-19 pandemic. Its slow return to pre-crisis activity levels from 2021 results in an 11% drop in emissions between 2019 and 2030.

The last decade sees around 25% of all abatement on our path to net-zero. This is made up of the final 11% of power generation, the last 20% of road transport and around half the effort from hard-to-abate industries such as steel and cement production.