In 2012, two female scientists, Jennifer Doudna and Emmanuelle Charpentier, made a scientific discovery that had a major impact on a broad range of biotechnology fields, including medicine, agriculture, bioenergy, and biomaterials. They discovered CRISPR-Cas9[1], a gene editing technology that can make targeted changes to the genetic code of any living organism.

CRISPR-Cas9 was adopted from an anti-virus defense system found in bacteria, and was found to be more versatile, cheaper and easier to use than other gene editing technologies. The discovery sparked a wave of innovation within academia and the biotechnology industry, leading to the development of newer technologies such as base and prime editors. Several startups have been launched or spun off from universities. In October 2020, the Royal Swedish Academy of Sciences selected the two pioneers, Doudna and Charpentier, as winners of the Nobel Prize in Chemistry. 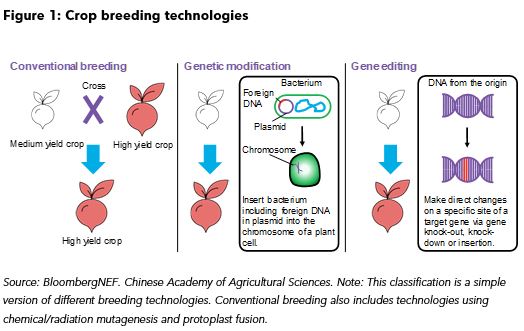 Within agriculture, novel gene editing technologies have the potential to revolutionize the breeding of new crops, giving them desired characteristics such as better nutrient content, longer shelf life, improved productivity or resiliency.

The term ‘gene editing’ is often confused with ‘genetic modification’ or ‘genetically-modified organism’ (‘GMO’). Both technologies aim to achieve desirable physiological traits in crop breeding, however, in general, gene editing does not introduce genetic material from another species (ie, non-transgenic) while GMO does (ie, transgenic). Thus, the genetic changes with gene editing in crop breeding could also occur in nature, while those in genetic modification could not. For this reason, some countries have deregulated non-transgenic gene-edited crops. In addition, crop breeders can develop gene-edited crops cheaper and more quickly than genetically-modified crops.

Today, 23% of global greenhouse gas emissions stem from agriculture, forestry and other land use, as shown in a BNEF’s research[1]. Fertilizers are one of the largest sources of agricultural emissions. Nitrogen fertilizers have improved agricultural productivity, but they produce nitrous oxide, a greenhouse gas nearly 300 times more powerful than carbon dioxide. As global food demand continues to rise alongside competing demands for arable land, continued yield improvement is critical. Some biotechnology companies are using gene editing to develop novel biologicals that can improve yield while reducing the use of nitrogen fertilizers.

Scientists are also using gene editing to tackle crop failures caused by drought, disease and soil salinization. Infectious diseases can devastate critical crops, such as bananas or potatoes, as can drought and soil salinity. Scientists at universities and technology companies are using gene editing to develop new varieties of rice, tomatoes and berries that are resilient to such adverse events. 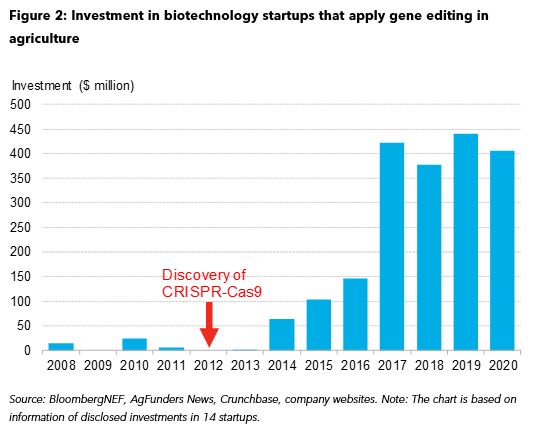 Currently, there are a handful of gene-edited products available for purchase in a limited number of markets, and industry startups have raised nearly $2 billion since 2012. Most of these, including Pairwise, Inari and Cibus, are located in two U.S. states: California and Massachusetts. Harvard University, Massachussets Institute of Technology, and the University of California hold key technology patents. In addition, access to venture capital investors and lighter U.S. regulations for gene-edited crops have made it easier for new ventures.

Chinese research institutes have also piled enormous resources into research and development (R&D) of gene editing for crops as part of China’s national strategy to modernize its agriculture sector. Seed companies such as Bayer and Corteva Agriscience actively collaborate with these startups in their R&D.

Overall, the industry is still at the very early stage, but we will likely see more new crop varieties made by novel breeding technologies in the next five years.

Uncertainty around regulations and consumer preferences are two major challenges. While some governments, such as the U.S, Japan and Australia, have reduced regulatory hurdles for gene-edited crops, others have not. The European Union regulates gene-edited crops like genetically-modified crops. The U.K., since Brexit, is considering easing regulations.

On the consumer front, past research suggests that a minority of consumers are willing to eat gene-edited crops. However, perceptions may change as regulations become clearer and knowledge on the topic increases.

BNEF has written this research based on “Advancing Agriculture: Gene Editing”.