My colleagues in China recently shared some interesting data about depreciation rates for used electric vehicles.

Looking at over 20,000 used EV sales in China, the analysis showed that the value of those vehicles dropped by an average of 45% after a year, 58% after two years and 67% after three years. That’s much faster than depreciation of comparable internal combustion vehicles, which fell 25%, 30% and 40% over the same time period. 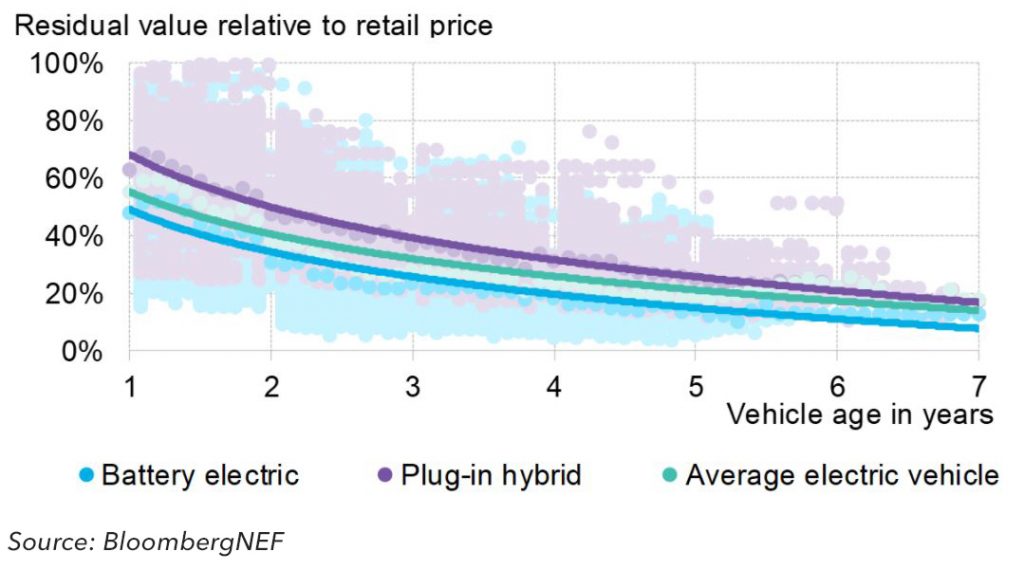 The rapid decline for China’s second-hand EVs is due to a combination of factors. For one, the technology is still quickly evolving so ongoing improvements in driving range and battery energy density are helping to make early models obsolete. At the same time, falling battery prices, subsidies, and automaker discounts on new models make older EVs look less attractive. Consumer concerns over battery degradation and loss of range also negatively affect the resale value of older EVs in China.

The used EV market in China actually is still small, with only 500,000 used passenger electric models sold in 2020. Most were compact short-range models that dominated EV sales in China from 2015 to 2019. Some of these models were also aimed at capturing the maximum subsidy from the government – which changed every year – rather than being designed fully around consumer needs.

A few things could change this trajectory in the years ahead. Automakers are acutely aware of this issue, and are working to address it. To start, many are extending battery warranties and offering valuations and certifications for pre-owned EVs. That should boost consumer confidence in the second-hand market.

Average EV range could also start to stabilize in the next few years: BNEF’s analysis shows that average EV range has increased by about 13% each year since 2011, but with average ranges now pushing almost 400km – and some as high as 700km – that may start to plateau in the next few years as charging networks improve. Carrying around a battery that can do 1,000km isn’t an optimal outcome from either an environmental or economic point of view.

Perhaps the most optimistic sign that this will start to turn around soon is that high-end EV brands like Tesla and NIO already have much lower depreciation rates. One-year-old Model X and Model S vehicles retained 77% and 65% of their initial prices respectively in BNEF’s analysis. Local EV automaker NIO also performed strongly on the used EV market, with its ES6 and ES8 model holding 91% and 71% of their value after a year of use. Higher-end EVs tend to suffer less loss over time. However much they lose, that’s less of a problem than for shorter-range EVs, where every bit counts.

With EVs in China now running at around 9% of new sales, and pushing into other segments as all automakers increase their offerings, we’ll revisit the analysis.