Bullard: Not All Fossil Fuels Are Going Extinct

Bloomberg New Energy Finance’s latest New Energy Outlook points the way to a sunny, windy future for the global electric power industry. That doesn’t mean that fossil fuels (or nuclear power) will vanish. It also doesn’t mean that all fossil fuels are the same. The future of natural gas and coal is a tale of two resources — one a story of rising fortunes, the other of slow decline.

The latest outlook on natural gas is brighter than ever: BNEF’s forecast for gas shows a higher estimate for consumption in 2040 than in previous years, with a short decline at the end of this decade.

(Mostly) Up and Up 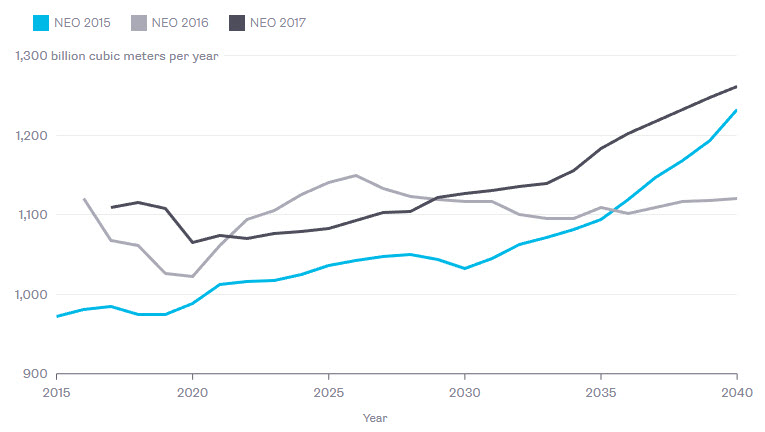 Coal is a different matter. Coal demand is expected to peak late next decade, then decline almost every year to reach a low of 3.1 billion metric tons in 2040, about 25 percent lower than at its peak.

Up …Then Way Down 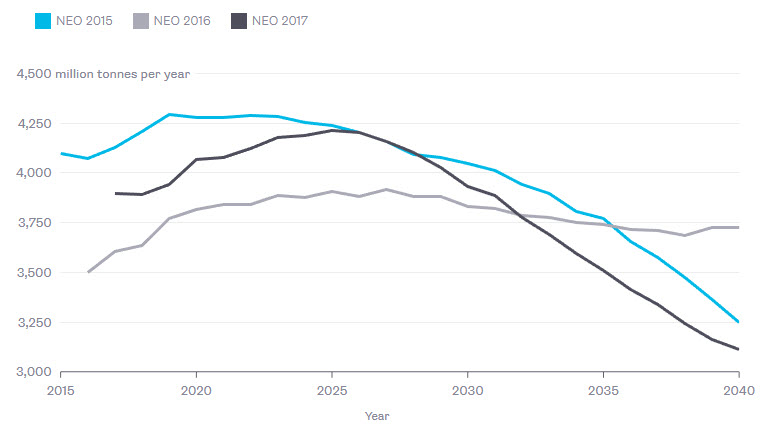 This long-term outlook is nuanced, as it should be. The aggregated demand for each fuel from 2020 to 2040 has not changed much in three successive New Energy Outlook reports. Total gas consumption has only increased 6 percent since the 2015 report, while coal consumption from 2020 to 2040 — despite the plunge that is now expected, as noted above — has only changed 3.5 percent, and was exactly the same in 2016.

However, the shape of that coal curve is still important, even if the volume hasn’t changed much. A coal mine that opens today could have a 60-year life, but it is likely to be one fraught with oversupply and competition from other coal producers, as well as other technologies.

So how does the 2017 New Energy Outlook for gas and coal compare to how major oil companies and the International Energy Agency see it?1 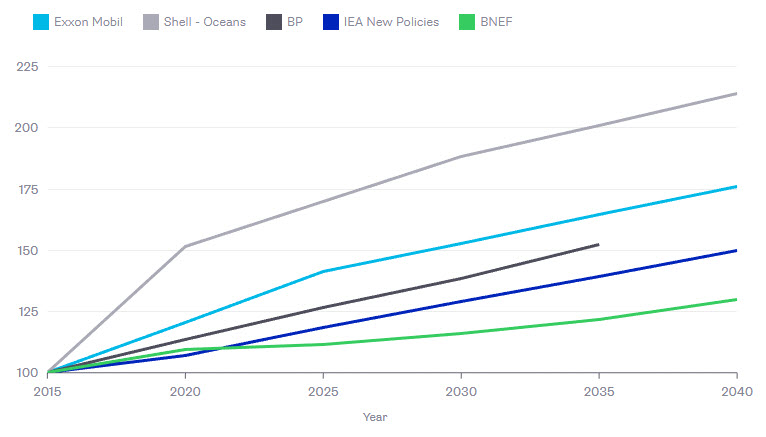 The outlook for coal isn’t so uniform. Shell and Exxon Mobil’s outlooks are both peak coal scenarios, at least for power generation. BP and the IEA expect slow increases in coal consumption.

Then there is BNEF.

Only One Forecasts a Decline 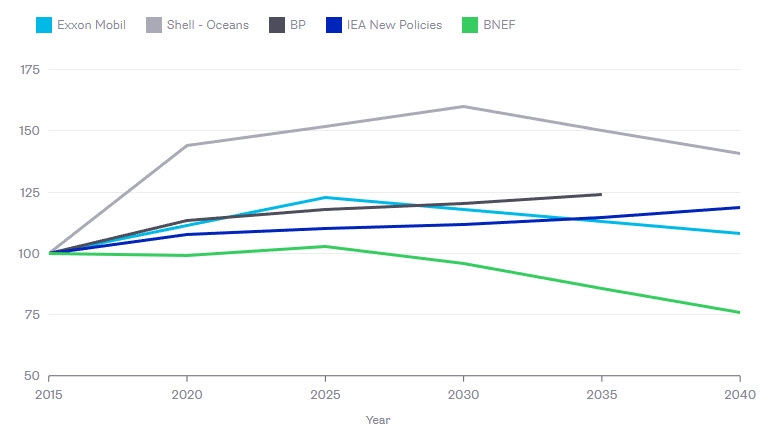 Of these five coal outlooks, one is negative, two show eventual declines after future peaks, and the others are up and up. The differences are more than academic. Energy and resources companies make large, long-term bets on future demand for coal, gas, and oil. The gap between forecasts and reality can be costly, in an era when a liquefied natural gas project can cost $54 billion. Companies (and energy markets) going long on gas for power generation are at least playing into a consensus view on overall increasing consumption. Companies and energy markets might be doing the same on coal — but the long-term outlook doesn’t bear them out.