Oil Demand From Road Transport: Covid-19 and Beyond

Road transport consumed more than 40% of all oil demand in 2019. The sector’s growth has been responsible for over half of total oil demand growth since 2000, and producers and forecasters alike expect there to be more growth to come.

This year, travel restrictions and lockdowns in response to the Covid-19 pandemic will erase more oil demand than the shipping sector consumed in all of 2019 – wiping out a decade’s worth of growth. However, the decline will be temporary and demand will return to pre-virus levels by 2022, led by growth in commercial trucks. The impact of the virus is likely to have caused oil demand from passenger cars to have peaked in 2019.

In the long-term, BloombergNEF has identified three disruptive forces that threaten to impact the demand outlook. These are:

Together, these forces will have a profound effect on the future of oil in road transport and, in turn, on the refining, fuels marketing and upstream sectors. 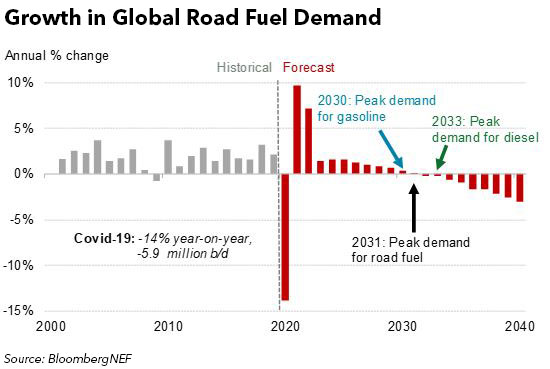 In BNEF’s 2020 Road Fuels Outlook, we forecast oil demand from the road transport sector to peak in 2031 at 47 million barrels per day before declining to 41.2 million barrels per day in 2040. This is despite the number of kilometers driven each year by cars, bikes and trucks increasing by more than 55%. Biofuels, such as ethanol and renewable diesel, will also increase their share of the market to 6.3%, from below 5% in 2019. Combined, this means there will be almost 2 million barrels per day lower demand for fossil fuel-derived road fuels in 2040, compared with 2019. 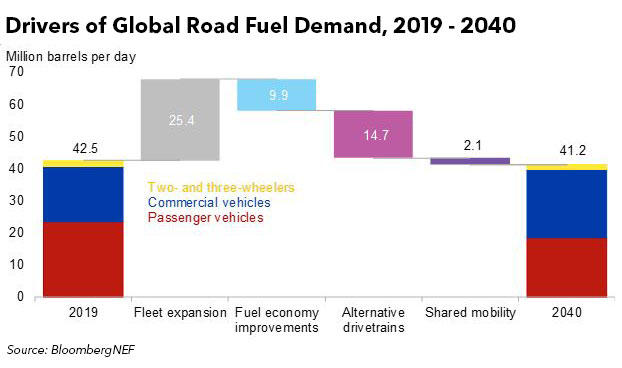 Mandated fuel economy improvements have, and will continue to, impact oil demand in road transport more than any other factor over the next decade. Ambitious fuel economy targets have already led to a peak in road fuel demand in the U.S, Europe, South Korea and Japan, according to BNEF analysis. Meanwhile, other markets are impacted by regulations in these countries as they seek to develop competing legislation or inherit fuel economy improvements through importing second-hand vehicles to meet domestic demand. Mandates have also extended beyond passenger cars, with the U.S., China and Europe among major markets to introduce mandates to improve the fuel economy of commercial trucks. China, the world’s largest two-wheeler market, has also introduced mandates for two-wheelers.

BNEF expects electric, hydrogen fuel cell and natural gas vehicles to each play a role in powering road transport in future. Combined, they will erode almost 15 million barrels per day of oil demand growth by 2040. Early signs suggest that passenger cars, delivery vans and two- and three-wheelers will be the first to be electrified. There are already more than 250 million electric two- and three-wheelers on the world’s roads, which, if powered by oil would consume almost 700,000 b/d of road fuel. Amazon, UPS and other major fleet operators have committed to buying electric delivery vans, while major automakers like Volkswagen have set ambitious electric vehicle production targets. In the heavy truck segment, natural gas and hydrogen fuel cell trucks will play a role in decarbonizing the sector, supported by policies in California, South Korea and Germany, among others.

Shared mobility services such as Uber, DiDi Chuxing and Grab will help satisfy the rising demand for transport in developing markets, and will lead to an additional 1.7 trillion miles travelled by 2040. Additionally, BNEF expects that electric vehicle adoption by these services will increase faster than that of privately-owned vehicles due to better economics. We expect autonomous vehicles, or robotaxis, to arrive in the second half of the 2030s, by which point electric vehicles are forecast to be cheaper than equivalent internal combustion vehicles, so that autonomous vehicles are likely to be electric.

What does all of this mean for emissions? Carbon emissions from road transport will peak in 2033 at 7.4 gigatons of CO2 before gradually declining. Despite the introduction of new technologies, and the improvement of old technologies, by 2040, emissions will be more than 6% higher than they were in 2019.  Current efforts to clean up road transport will fall short of reigning in emissions by the end of the next decade.