Oil Skeptics Exit as Market Dispels Gloom to Flirt With $50

As pessimism over oil dissipates and investors flirt with $50 a barrel again, short-sellers are getting out of the way.

Hedge funds are the most upbeat about West Texas Intermediate crude in three months after bets on declining prices shrank. Meanwhile, signs that the shale boom is slowing and the market is moving closer to balance set the mood for futures to jump 8.6 percent last week.

“People started to feel they were getting close to the bottom and it was time to close out,” Michael Lynch, president of Strategic Energy & Economic Research in Winchester, Massachusetts, said by telephone. While there had been questions on whether the market is rebalancing, “people are starting to think that it’s real. There’s a Santa Claus and he’s going long in the oil market.” 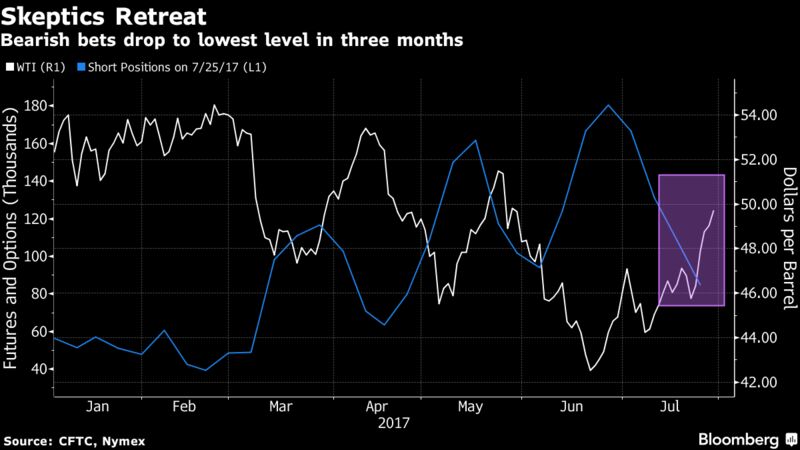 Hedge funds increased their WTI net-long position — the difference between bets on a price increase and wagers on a drop — by 11 percent to 238,501 futures and options over the week ended July 25, data from the U.S. Commodity Futures Trading Commission showed. Shorts slipped by 22 percent and stood at less than half their level at the end of June. Longs fell 0.2 percent.

The net-bullish position on the benchmark U.S. gasoline contract rose for a fifth week to the most bullish stance since April. The bearish net-position on diesel tumbled 91 percent. 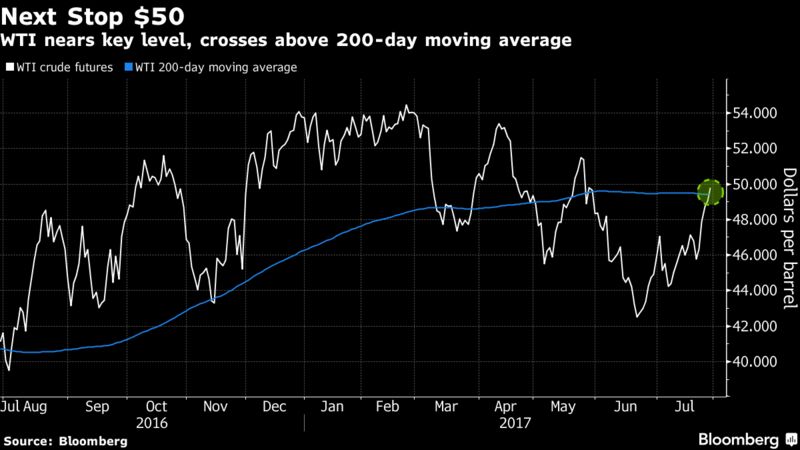 WTI on Monday was 0.3 percent higher at $49.87 a barrel as of 1:20 p.m. in Singapore. Prices earlier in the session traded above $50 for the first time since May 30 and were extending gains above the 200-day moving average, a breach of key levels that could entice investors to step up bets on the rebound.

When prices trade “through the 200-day moving average, usually you see funds jump in at that point,” Bob Yawger, director of the futures division at Mizuho Securities USA Inc. in New York, said by telephone. “$50 is a big number.”