Just five years ago it would have been almost unthinkable that one of the world’s biggest mining companies would not dig any coal. It’s now likely to become a reality.

Rio Tinto Group, the world’s second-largest miner, has been steadily backtracking from coal to focus on better assets. It’s now looking for buyers for its remaining coal mines in Australia, and a sale will mark a complete exit from the fuel.

Rio’s potential coal-free future is in stark contrast with many of its rivals. Glencore Plc, the world’s top coal shipper, this year increased its exposure by agreeing to pay $1.1 billion plus royalties for a large stake in Australian assets sold by Rio. The fuel, which generates about 40 percent of the world’s electricity, is one of BHP Billiton Ltd.’s main strategies, while Anglo American Plc has pulled back on plans to sell out of the commodity. 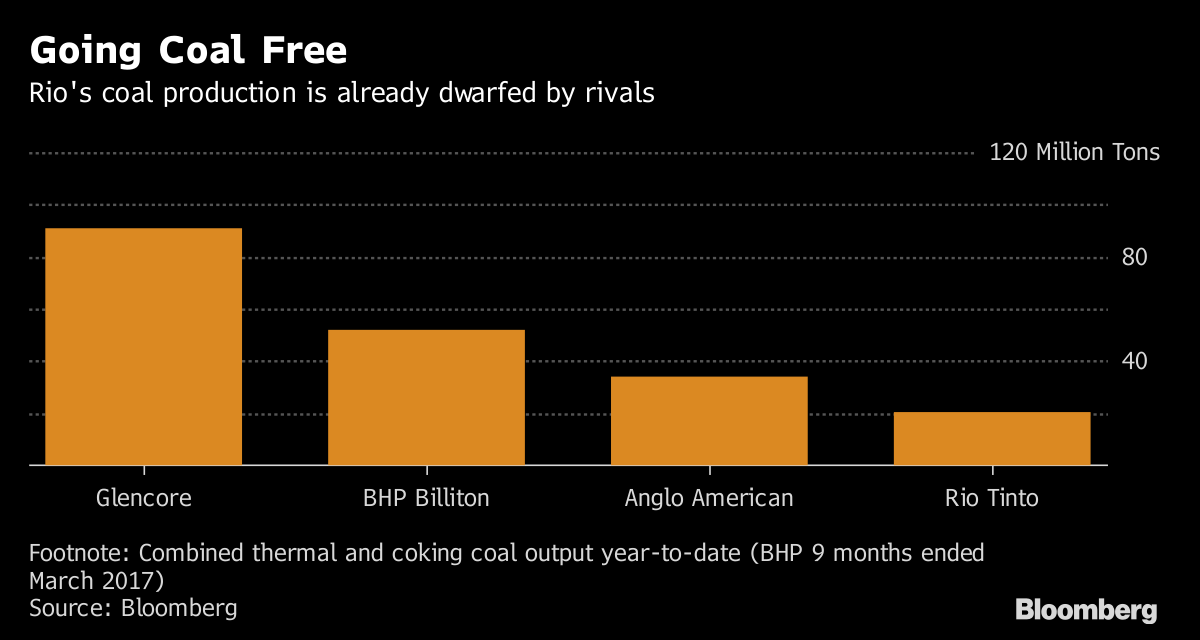 While many miners are bullish on coal, the world’s dirtiest fuel has become a flashpoint for a growing movement of investors calling for miners to cut their exposure. For example, Norway’s sovereign wealth fund doesn’t invest in firms that make 30 percent of their sales from coal, while the Church of England sets the limit at 10 percent.

“People are picking different levels, whether they are divesting for ethical reasons or for business driven reasons,” said Helen Wildsmith, head of climate change at CCLA Investment Management, which manages money for the Church of England. “Having one of the big diversified miners without thermal coal does give investors more options.”

Yet Rio’s decision is more to do with its coal mines not being able to compete with its other assets, rather than pressure from climate-change or divestment campaigns. Chief Executive Officer Jean-Sebastien Jacques has argued that even a mining firm as big as his only has so much managerial talent and money, and must focus those on more productive assets. It has also been able to sell coal mines for what it sees as good prices, allowing more cash to be returned to shareholders.

Even so, mining companies are increasingly having to consider how global proposals to curb greenhouse gases will impact the future of commodities they mine, said Wildsmith, who’s part of a team of investors that talks to firms like BHP and Rio about climate change.

“The big diversified miners are all trying to work out which commodities are going to be most disadvantaged in the future, and the low-carbon transition is one of the big uncertainties that they and other companies are facing,” she said. “We’re seeing more companies integrating their thinking on climate change scenarios into the macro-economic and cyclical scenarios that they work with.”

Benchmark prices for Australian coal jumped almost 90 percent last year as China moved to restrict the number of working days at coal mines, and have added another 3 percent this year.

It looks like Rio won’t have to worry about coal for too much longer. It sent out preliminary information on the Hail Creek and Kestrel coal mines to potential buyers last month and asked for indicative bids by early December, people familiar with the matter said in October.

The London-based miner has been shedding its Australian coal assets since dismantling its energy division in 2015. Earlier this year, it agreed to sell its Coal & Allied Industries Ltd. to China’s Yanzhou Coal Mining Co., before Glencore then bought a stake in the project. Rio has also sold other projects from Australia to Mozambique.