At first glance, OPEC’s cuts haven’t worked — global oil inventories remain well above normal levels. But the policy’s made a difference where it really counts: juicing the coffers of finance ministries from Baghdad to Caracas.

The resurgent flow of petrodollars explains why Saudi Arabia and Russia have largely convinced everyone else in the deal to extend the production cuts another nine months to the end of March 2018.

“Make no mistake, it is all about oil revenues,” said Bhushan Bahree, a senior director at consultant IHS Markit. “The bottom line for oil producers begins, unsurprisingly, with a dollar sign and ends in billions.”

The International Energy Agency, which advises rich countries on oil policy, said earlier this month that OPEC has a “financial motivation to extend the supply cuts.” The IEA calculates the cartel earned almost $75 million extra a day in the first quarter of this year than in the last quarter of 2016, despite collectively cutting output to 31.9 million barrels a day from 33.3 million. Consultant IHS Markit said Russia, the largest country outside the cartel to join the cuts, also earned more. 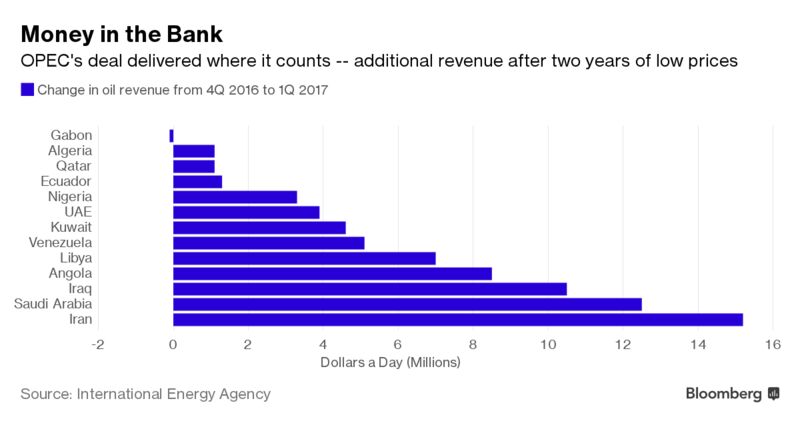 OPEC and its allies believe they can continue earning more while pumping less. Even those countries that question whether an extension can re-balance the market and bring down elevated stockpiles don’t oppose an extension. While oil ministers have a sense of defeat in their battle against high inventories, finance ministers are happy, one OPEC delegate said.

Brent crude, the global benchmark, has risen from about $46 to $54 a barrel since the agreement to curb output by a total of 1.8 million barrels a day was first decided in the final weeks of last year. But oil prices have dipped below $50 a barrel a couple of times as investors sold the commodity amid signs the global glut isn’t notably easing. Brent rose 0.3 percent to $54.30 a barrel as of 1:42 p.m. in Singapore on Wednesday.

“Charitably, one would argue that things have not quite worked out yet,” said Jan Stuart, chief energy economist at Credit Suisse Group AG in New York.

To read a QuickTake Q&A on OPEC’s meeting this week, click here.

OPEC and non-OPEC countries meet on Thursday in Vienna to approve the rollover as delegates say the nine-month extension has broad support.

Almost all countries back such an agreement and none are opposed, Algerian Energy Minister Noureddine Boutarfa said Wednesday in an interview in Vienna, adding that a few had reservations.

The proposed extension is the latest attempt by oil producers to prop up prices and revive their economies. The talks in Vienna are closely followed elsewhere as they can affect everything from the share price of Exxon Mobil Corp. to the Brazilian real and Nigerian sovereign bonds.

“The trend now regarding the output deal is to extend for nine months,” Saudi Minster of Energy and Industry Khalid Al-Falih said on Monday. “All I talked to from inside OPEC are supporting the nine months of cuts.”

Al-Falih won the backing of Iraq to extend the cuts after he flew into Baghdad for rare face-to-face talks in the Iraqi capital.

The Organization of Petroleum Exporting Countries and 11 non-members agreed late last year to cut output by as much as 1.8 million barrels a day. The supply reductions were initially intended to run for six months from January, but the slower-than-expected decline in surplus inventories prompted the group to consider an extension.

Data from the U.S. Energy Information Administration indicate that maintaining the curbs into the first quarter of 2018 would bring stockpiles back in line with the five-year average — OPEC’s stated goal.

The risk for OPEC is that they haven’t been the only producer to win from the cuts. The U.S. shale industry, which became leaner and fitter during the oil-price slump, has increased output 500,000 barrels a day since OPEC started to discussing the cuts to 9.3 million and American-based companies all reported stronger revenues year-to-date.

“OPEC faces a tough job: it has now learned how fast shale can come up back,” said Giovanni Serio, head of research at oil trading house Vitol Group BV.