The Covid-19 pandemic is one example of the differing strategies of regional oil players when under pressure. Another example has been the emergence of cheap U.S. shale oil and gas. Whenever price shocks occur due to demand changes or large new suppliers enter the market, oil companies tend to first reduce capex by pegging back production to protect their short-term cash flow, then with longer price dips invest in asset and operations modernization. If oil prices continue to be depleted for the coming years (whether that is at $20 or $50 a barrel) oil majors around the world will have to adjust and find ways to cut costs. In a previous blog, we outlined how digital technologies could play a part. Here we give a further nuanced view based on regional personalities.

The shale revolution brought with it small, nimble, new oil firms that leveraged data and took pride in lean operations. The cost to produce a barrel of unconventional oil in the U.S. has more than halved since 2014. The most advanced shale companies such as EOG Resources Inc. and Pioneer Resources Co. give thanks in part to digital technologies, such as sensor data, cloud computing and big data analytics. U.S. oil companies have also benefited from widespread connectivity and many new partners to work with, including cloud computing companies Amazon, Google, and Microsoft.

It is in character for certain types of oil companies to be more adventurous than others when it comes adopting technology. European majors such as Equinor ASA, BP Plc and Royal Dutch Shell Plc, which see themselves as technology-savvy, have been quick to launch venture capital arms, to start digital training academies and to carry out pilot projects for upstream digitalization, such as predictive maintenance or production optimization. Investors in European oil companies have also been the fastest to push the sector to reduce environmental footprints and ensure the safety of workers. The cost and safety benefits of digital technologies led Equinor to operate the world’s first unmanned oil platform, for instance. While Repsol SA publicly hopes to reap up to $2.7 billion from its digital schemes (this data was announced before the Covid-19 outbreak). Shell has announced that 2,000 of its 82,000 employees are enrolled in a four- to six-month online artificial intelligence ‘nanodegree’ run by Udacity. This is in part to meet demand internally for AI experts but also to increase job satisfaction at a firm that is competing with technology companies for the best graduates. The same trend plays out in the U.S., with oil companies there hoping to make themselves attractive to new hires through investments in technology. 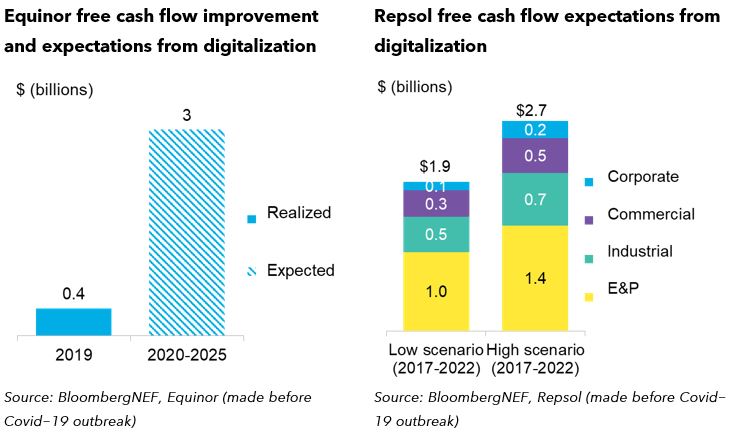 But the real digital story is in Asia

While European majors might have the right personalities to embrace digitalization, Chinese companies are incentivized through strong government targets. The Chinese government’s ‘Internet Plus’ and ‘Made in China 2025’ policies act to speed both the implementation of digital technologies in industry and the percentage of technologies developed within China. National oil companies Sinopec and China National Petroleum Corp. have deployed pilot projects for analytics across their operations, relying on internal IT arms and consultants. These IT arms can be up to a quarter of the labor force. CNPC spends over 10 billion yuan ($1.4 billion) annually on software, while Sinopec has even launched its own IoT platform with Huawei, called Promace, that it is selling to peers in China. CNPC says it has reduced the O&M costs of oil production by 20%, and Sinopec has cut unplanned refinery shutdowns by 50%.

While very few companies in the U.S. and Europe have a focus on downstream digitalization (there is limited new capacity coming online in the West), oil majors in Asia should look to digitalize the vast new refineries now being commissioned (see chart). There is a chance for the nationally owned Asian refiners in China, India and South East Asia to significantly reduce operating costs and increase the levels of automation in these refineries, helping them stay competitive, or even set the bar for refinery excellence globally.

Look to the national oil companies as fast followers

Oil companies in the Middle East have benefited from some of the lowest production costs in the world, and the backing of their owners, the governments. However, a few factors are converging to put digital technologies for cost optimization on the table.

First, this low price environment hurts countries and companies reliant on oil revenue, even Saudi Aramco. Secondly, both Saudi Arabia and the United Arab Emirates have launched national digitalization strategies and goals out to 2030. Both have strengthened their visions with funding, hoping to encourage greater innovation and startups. Third, the partial IPO of Saudi Aramco has opened it to more global scrutiny and new shareholders might try to push for modernization and cost reductions.

Because of the concentrated market share owned by a few national oil companies in the Middle East, we expect the region to adopt analytics and IoT en masse. In contrast to Europe, Middle Eastern firms are not turning to startups or in-house incubators. Instead they are looking to scale fast with large technology firms for mature and existing digitalization tools.

While U.S. shale players pioneered the use of data analytics to improve production costs, the traditional North American majors have been slower to digitalize. Chevron Corp., ExxonMobil Corp. and Suncor Energy Inc. for example, all have digital teams and have moved some operations to the cloud but have not announced large schemes or targets, nor results, to date. We do not expect many international oil companies to announce new digitalization plans while oil prices are this low, but we would be surprised to see them eliminate digital software spending altogether because it is a useful efficiency tool. National oil companies may react differently to the downturn. Many, particularly in Asia, have larger refining arms and smaller upstream operations, and they may continue to invest more in digitalization if it helps them reduce costs and increase output.