New BloombergNEF research shows that the power sector will spend $3.2 billion on software in 2020 to optimize the performance, costs and revenues of generation and grid assets. BNEF believes this will grow to $5.2 billion by 2025, driven by the sectors decarbonization mandate. For power generation software, China and Europe will be the biggest markets, accounting for 26% and 24% of the global market respectively. We estimate the market for power grid software in 2020 is split roughly evenly between China (28%), the U.S. (21%), Europe (25%) and the rest of the world (26%). The market share of Europe and the U.S. erodes toward 2025 due to growing demand for software in the rest of world.

The falling cost of IoT sensors and communications networks has helped expand the use of advanced analytics such as asset performance management (APM), and also the use of in-field digital tools such as augmented reality. While the growth in cloud computing and artificial intelligence use is making predictive maintenance (PdM) and computer vision popular. Smart-grid technologies have also become more real-time and automated thanks to IoT and analytics.

This market size is only for software spend, with the total digitalization cost being about double this due to upfront hardware and services fees. Power plant and system operations will also spend millions of dollars on software for weather forecasting, predicting power demand, and operating trading platforms.

Power generators will spend $2.8 billion in 2025 on software that optimizes costs, reliability and remote operations

In 2020, BNEF believes utilities will spend $1.8 billion on software to monitor, maintain and optimize power generation assets. The significant growth in renewable capacity and shifting wholesale market dynamics will drive the software market to grow by 60% to $2.8 billion by 2025. 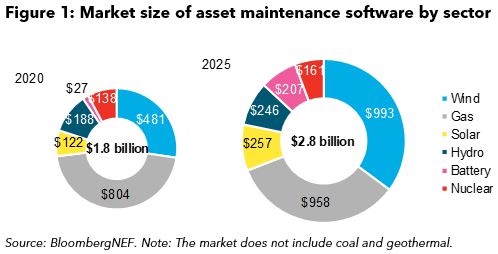 China and Europe are the biggest markets for power generation software, accounting for 26% and 24% of the global market respectively. China is particularly aggressive in digitalizing nuclear fleets as part of a national strategy to modernize its nuclear capacity. European utilities have a lead in digitalizing the wind sector, given its large amount of offshore wind capacity. The U.S. has a large amount of gas power generation and utilities there are spending money on digitalizing these plants as they play an important role in providing flexibility to the power market.

The largest software application is remote monitoring software, prevalent in the wind, solar, gas and battery sector. Equipment manufacturers and service companies such as GE and Siemens are the most common sellers of this type of software. Despite being a smaller market today, we expect the advanced analytics market (sold by service companies and startups) to grow 50% over the next five years, including predictive maintenance, computer vision and augmented reality.

The wind sector will become the biggest end-market for asset software by 2025, overtaking the gas sector. We expect 78% of wind capacity will have monitoring software, and 40% of wind farms will use APM and image analytics for fault diagnostic. The gas sector has a lower software adoption rate – 63% for remote monitoring and 20% for APM – yet capacity will remain 70% larger than wind in 2025.

Utility-scale solar and utility-scale battery plants will be the fastest growing sectors for software adoption, considering the large amount of capacity to be built in the next five years. However, the software used by solar and battery plants for monitoring and management are simple and relatively cheap. Neither sector has as much potential for advanced analytics applications compared to gas or wind power. We estimate solar software to be under $300 per MW, compared to $550-$750 per MW for wind and gas software.

The hydro and nuclear sectors have been slower to adopt software. Hydro plants are old (average age over 50 years) and take time to retrofit for digital instruments. Nuclear plants face regulatory hurdles in adopting software due to security concerns. However, there are some digital leaders in these sectors, notably China.

As renewable assets become larger and more remote, and the field workers that used to do manual inspection tend to retire soon, digital technologies will become increasingly indispensable. It can be difficult to quantify the savings from advanced analytics, and the size of the benefit often depends on how the utility uses the software to adapt maintenance schedules. We expect software sellers to adopt new pricing models or cost savings sharing options, to make the product more attractive.

BNEF believes operators will spend $2.4 billion in 2025 on software for monitoring, operating and automating the distribution and transmission grid. Within the software technologies we included, the biggest and most mature software is advanced distribution management systems (ADMS), worth $1.2 billion in 2020 and $1.5 billion by 2025. ADMS manage a number of core smart-grid functions including self-healing grid and voltage optimization. Self-healing grid capabilities – also known as fault location isolation and service restoration (Flisr) – analyze grid data to locate faults or outages automatically. An ADMS then manages which switches and relays should be opened/closed to isolate the fault and, if possible, restore service to unaffected areas. Voltage optimization leverages intelligent grid equipment to manage voltage levels on the distribution grid and can reduce power losses by up to 3%. Adoption of ADMS software is linked to the growth in smart meters. The most mature regions are East Asia, Europe and North America, which all achieve penetration rates of over 80% by 2025.

Asset performance management (APM) is the other major category of grid software in 2020 but it is less mature than ADMS. APM software for the grid will be worth $456 million in 2025. Asset performance management software is used to improve network reliability and stretch the lifetime of aging equipment. In markets where adoption is most mature (Europe and the U.S.), it reaches penetration levels of 35-50% of asset by 2025. APM is less mature than ADMS. In North America, BNEF estimates that 51% of power transformers will be monitored by APM software by 2025.

North American grid operators lead on the adoption of this technology in an effort to improve their lagging reliability statistics.

The fastest growing software markets for the grid are drones and augmented reality. BNEF expects the drone and AR software market to be worth $249 million and $119 million respectively by 2025. Drones are currently used widely in grid maintenance but are operated by humans. Developments in computer vision software mean drone flights and inspections can be totally automated, from flight path to image analysis. The enormous growth in this sector (99% CAGR) to 2025 is driven by BNEF’s belief that beyond-visual-line-of-sight drone flights will be common. Grid operators currently only use AR technology in pilot projects but we believe it could scale quickly. One in four grid workers could have an AR software license in some developed markets by 2025. AR headsets will be used primarily by line workers to access information while working and to communicate effectively with remote experts.

The extent to which software can improve grid reliability and reduce the cost of inspections will dictate its adoption rate. We expect software to only become more important as more solar and wind farms are added to the grid and climate change increases the risk of wildfires and storms. One major category of software often touted as essential in integrating renewables is distributed energy resource management systems (Derms). BNEF expects, however, that spend on Derms software will still be limited in 2025 at around $35 million. This is because the ramp-up in the deployment of distributed energy resources – the factor necessitating Derms – is still relatively slow in the early 2020s compared with what is expected in the 2030s.