Automakersfrom Renault SA to Tesla Inc. have long touted the cheaper fuel and running costs of electric cars that helps to displace the higher upfront prices that drivers pay when they buy the zero-emission vehicles.

Now research from Bloomberg New Energy Finance indicates that falling battery costs will mean electric vehicles will also be cheaper to buy in the U.S. and Europe as soon as 2025. Batteries currently account for about half the cost of EVs, and their prices will fall by about 77 percent between 2016 and 2030, the London-based researcher said. 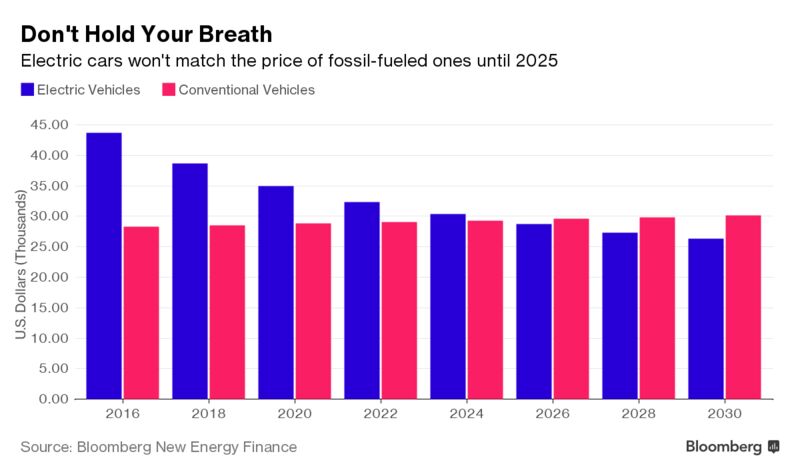 “On an upfront basis, these things will start to get cheaper and people will start to adopt them more as price parity gets closer,” said Colin McKerracher, analyst at the London-based researcher. “After that it gets even more compelling.”

Renault, maker of the Zoe electric car, predicts total ownership costs of EVs will by the early 2020s equal conventional internal combustion engine vehicles (known in the trade as ICE), according to Gilles Normand, the French company’s senior vice president for electric vehicles.

“We have two curves,” Normand said in an interview earlier this month in London. “One is EV technology cost reductions because there are more breakthroughs in the cost of technology and more volume, so the cost of EVs will go down. ICE going to go up as a result of more stringent regulations especially regarding to particulate regulations.”