Q&A with Adam Gordon, Investec: ‘nowhere else to squeeze’ on cost of finance

If base rates globally were to rise, so would the overall cost of financing renewable energy projects, because “margins don’t have room to compress,” according to Adam Gordon, co-head of power and infrastructure at asset manager Investec Plc.

“We received notice of a deal done recently at a 140-points margin, which when combined with today’s very low base rate, shows how low the all-in cost of finance has come to,” Gordon said in an interview. “There’s nowhere else to squeeze,” he added.

Admittedly, technology costs are dropping rapidly in the offshore wind, solar PV and energy storage sectors, which should help reduce the size of project finance loans. And lower costs of debt should be achieved for earlier-stage technologies, such as grid-scale batteries as people “get more comfortable with the technical parameters,” he told Clean Energy and Carbon.

“There are clear applications where batteries make sense,” such as frequency response, but building an investment case “out of what really are ancillary services” can be tricky, said Gordon. “The volatility seen in those revenue streams drives investors either to walk away or demand higher returns than they can usually get.” However, he expects the capital cost of batteries to drop over time to the point where they become viable to a larger investor base.

Regarding 2016’s record low prices for wind and solar in power auctions from South America to the Middle East, Gordon said that a competent developer community has emerged with the risk appetite to bid very low in order to secure a contract. “If they can’t finance it, then they accept it and write it off as a development risk,” he said.

At a time when Europe is seeing a slowdown in new-build projects (apart from in offshore wind) and a focus on re-leveraging portfolios, Investec anticipates growth in rooftop solar in India, off-grid power in Africa and corporate renewable energy procurement.

Source: European Commission
The ten EU countries with the biggest share of renewables in energy consumption.

Q: What trends are developing in renewable energy investment?

A: In Europe there’s a slowdown in greenfield projects but a lot of activity around refinancing portfolios. Investors have very long-term debt from the early 2000s that’s now near the end of term, and so portfolio managers are looking at re-leveraging, in conjunction with repowering where it would make sense to do so. However, in many countries incentives are low or non-existent and planning is not always straightforward, given that for repowering, turbine heights would usually increase significantly. Investors are looking at how best to get value out of existing assets—either through life extension, refinancing or repowering.

Again in onshore wind but more in solar, corporate renewable energy procurement is an emerging idea. There is a lot of interest in rooftop solar — especially in India and the U.S. In India we’re raising capital for a developer who does commercial and industrial rooftop solar, and in the U.S. we’ve done a lot of finance for residential rooftop solar.

There’s a lot of talk about off-grid, co-location in sub-Saharan Africa. The deals are always a bit slower there, but we expect that they will grow in importance.

Q: Are there similar trends in thermal power investment?

A: We’re seeing lots of thermal power activity. Our operations in Africa are still actively looking at thermal power. We’ve financed over a dozen CCGTs [combined-cycle gas turbines] in the U.S. and continue to do more. The interest in CCGTs in the European market is there — the U.K. government seems to be actively promoting gas-fired generation — but market signals are lacking due to depression in capacity market prices.

Gas prices have been dropping — leading the power price down — and the influx of solar energy has depressed intraday power prices. All of that has put uncertainty on prices, which makes it difficult for people to make investment decisions. Many commercial developers we talk to want to invest but need more visibility on returns. They are just not comfortable enough that they can predict a sensible load factor and price with a sufficient capacity market revenue to get their deals done.

If you compare the U.K. market with the PJM market in the U.S. [the Pennsylvania, Jersey, Maryland Power Pool] – one of the big differences there is that you will get hedging contracts for a sensible period of time, which will allow debt finance to come in and be sufficiently amortized to make financing more attractive.  There are higher capacity payments and market contracting for 4 to 5 years after construction. So there are market counterparties who are willing to take an 8-year view of power prices, which enables financing of these deals. The European, and certainly U.K., market does not have that kind of hedging capacity, which makes financing more challenging.

Q: Investors are waiting for old plants to be decommissioned so that there is more demand for new plants to come online?

A: Absolutely — the expectation is that more coal will get taken off and that older CCGTs will start retiring faster. But until that actually happens the investment signal isn’t strong enough.

One of the tricky things is that if you stand back and wait for market price to actually spike, then you are waiting for a squeeze to become more apparent, and you’ve still got procurement and build time to add onto that.

That isn’t ideal because you will be faced with a lot of competition once you actually get the plant commissioned.

Q: Has Investec considered investment in energy storage in response to the capacity market auctions in the U.K. or demand for frequency regulation in California?

A: There are clear applications where batteries make sense, and frequency response is one of them. A number of people would like to support battery storage, but once they delve into the nature of the revenue sources they find that they are trying to build an investment case out of what really are ancillary services. The volatility seen in those revenue streams drives investors either to walk away or demand higher returns than they can usually get.

We’ve seen some people who are managing to get projects off the ground, where the price of batteries is dropping sufficiently and they can build a business case around revenue streams. Overall, we are reasonably confident there will be more battery storage. It’s a matter of when capital prices for batteries drop sufficiently to make them more viable. Over time, people will get more comfortable with the technical parameters of batteries and the cost of debt will reduce — just as we have seen in the solar industry.

Q: Can you see batteries as viable for the capacity market?

A: You can’t rely on the capacity market alone to make a business case work for both debt and equity. For that you need additional revenue streams from things like frequency response, which is more volatile.

Q: Were base interest rates to rise again, what would the impact be on project finance? Would you expect all-in borrowing costs to rise, or will risk premiums come down to compensate?

A: We received notice of a deal done recently at a 140-points margin, which when combined with today’s very low base rate, shows how low the all-in cost of finance has come in the current market. If base rates do rise, then the margins don’t have room to compress to absorb that difference and the overall cost of finance will actually rise because there’s nowhere else to squeeze.

This is looking at purely the cost of finance. There are probably other things in a project structure that will evolve and reduce cost, such as technology, but the absolute interest costs won’t be one of them.

Q: What are your thoughts on auctions? Is there a risk that projects won’t get built because the assumptions on cost reduction are too aggressive and people are bidding at adjusted returns that are too low?

A: It depends on who is doing the bidding. In many cases it’s a large utility, and they tend to follow through on projects and get them built. They have a view on the required return and have procurement efficiencies that allow them to have extremely low equipment costs and therefore capex.

Where things work less well is where you have inexperienced, often smaller, developers who bid at very low tariffs to try and win contracts and find they can’t attract the finance or get the equipment at the prices they hoped to make the agreed tariff achievable. Those are some of the deals that don’t happen.

There’s another interesting category though. A large developer community has evolved because the barriers for entry to developing renewable projects are relatively low. Many are competent and have the risk appetite to go and develop and spend some risk capital. They bid at a price to secure a contract and, if they can’t finance it, then they accept it and write it off as a development risk they were prepared to take. 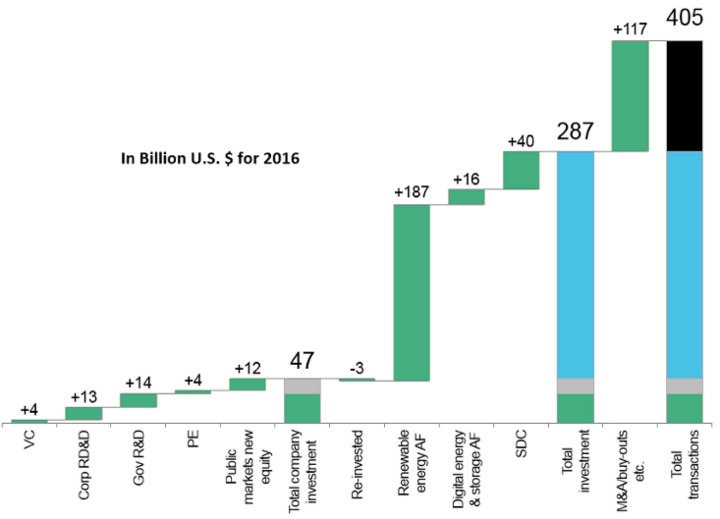 Q: Investec has been prominent in leading rooftop solar financing dealsin the U.S for Sunrun, Vivint Solar andSpruce. Is the industry threatened by a potential reduction in corporate taxbrought about by the new Trumpadministration?

A: We still see a steady stream of business in that area. We’re in discussion with a number of people who continue to have strong pipelines. As solar pricing continues to drop and supply chains also get more efficient, then the cost of building projects will drop. Tax equity fills a capital hole, and if the capital hole is not required because the cost is lower, then it isn’t really a big problem. Anyway, substitute sources of financing may arise if the demand for tax equity were to fall.