Chaos at airports may be hogging the limelight in the aviation industry right now, but once the disruption subsides, there will still be a pressing and long-term challenge to address: how to cut emissions to help address the climate crisis.

Emissions from aviation amounted to 1 gigaton of carbon dioxide in 2019, equivalent to around 2% of the global total. The International Air Transport Association has established a target to reach net-zero emissions by 2050, with its plan leaning heavily on sustainable fuels, as well as new technologies, operational efficiencies and carbon offsets.

Those novel technologies include electric and hydrogen-powered aircraft, but the reality is, their commercial deployment could well be decades away. In the meantime, in the absence of significant breakthroughs or policy interventions, the majority of air miles look set to be powered by fossil fuels.

Here are five charts from BloombergNEF looking at the route to more sustainable flying.

1. The scale of the problem

The aviation sector consumed close to 8% of oil products globally in 2019. That’s equivalent to around 7 million barrels of fuel per day, with passenger aircraft accounting for over 90% of the total. This volume was double that of 1990 and almost 50% higher than in 2010.

While Covid-19 resulted in a significant reversal in momentum, long-term fuel demand is expected to leap to 13.9 million barrels per day by the middle of the century, just shy of the total oil consumption of China in 2021. That’s according to BNEF’s Economic Transition Scenario, an economics-led pathway for how the energy transition evolves through to 2050, which assumes no new policy changes are enacted. 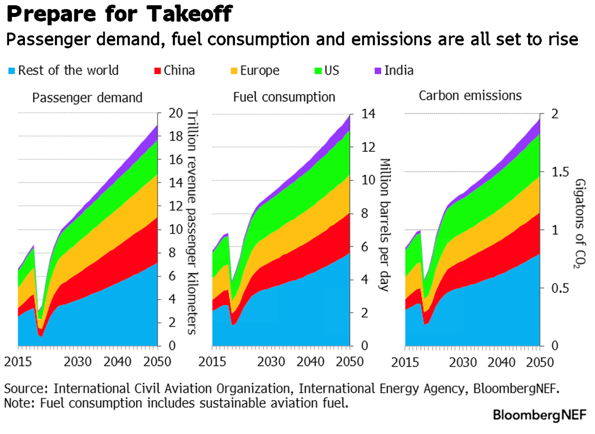 All of this means that without further intervention to clean up the sector’s environmental footprint, aviation emissions could jump from around 1 gigaton of CO2 in 2019 to almost 2 gigatons by 2050.

As with the rest of the global economy, there is no silver bullet when it comes to decarbonizing aviation – there are several areas across the sector where emissions can be lowered and a number of technologies that could help to do so.

Looking at the planes themselves, improvements in fuel efficiency would enable airlines to curb both their costs and emissions. The switch to more fuel-efficient fleets will likely be spurred by the need to replace aging aircraft and adapt to higher carbon prices. 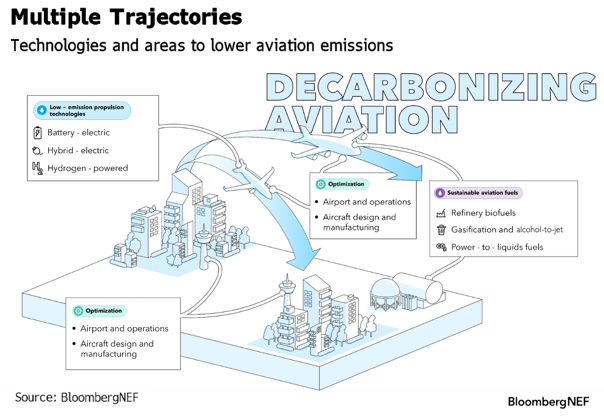 But improvements to aircraft efficiency, alone, will not be enough to reach net-zero emissions. Increasing the use of sustainable aviation fuel, known as SAF, will be important, and there is even scope to produce jet fuel without relying on fossil fuels – something that California-based startup Twelve is working on.

Ultimately, the sector will require a more radical long-term overhaul through the introduction of new propulsion systems, such as electric and hydrogen-powered planes. However, their applications will likely initially be limited to short- and medium-haul flights, at least before 2050, according to Takehiro Kawahara, an aviation specialist at BNEF.

3. How airlines are responding

Over half of the 65 major global airlines tracked by BNEF have set some form of net-zero target, including the likes of Ryanair and American Airlines, and more are expected to do so. Together, these 65 operators have undertaken almost 400 decarbonization initiatives.

While there are numerous potential low-carbon solutions on offer, few are cost competitive or available at a commercial scale at present. This means airlines have mostly centered their activity around securing multi-year contracts for SAF and modernizing their aircraft fleets. 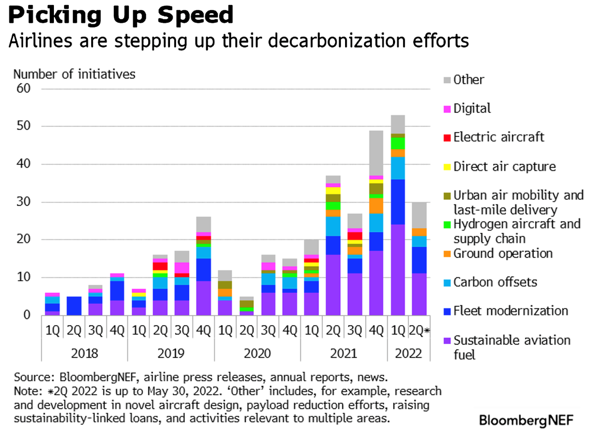 The promise of electric and hydrogen-powered planes has drawn some early interest from airlines. Startup ZeroAvia announced in July that it had raised $30 million from investors including British Airways owner International Consolidated Airlines Group. The hydrogen powertrain company also counts Alaska Airlines and United Airlines among its backers.

“In the long term, more airlines will consider zero-emission aircraft in their decarbonization strategies as novel propulsion technologies become closer to being viable,” says Kawahara.

Until low-emission aircraft propulsion systems are rolled out at scale, SAF is an immediate solution to help decarbonize aviation. Derived from sources such as waste cooking oil, SAF offers a more environmentally friendly alternative to fossil-fuel-based kerosene, and as a drop-in fuel, is compatible with existing infrastructure.

SAF currently accounts for less than 0.1% of global jet fuel use, and BNEF expects this to rise to around 4% in 2030 and close to 6% by 2050, led by growth in Europe and North America. 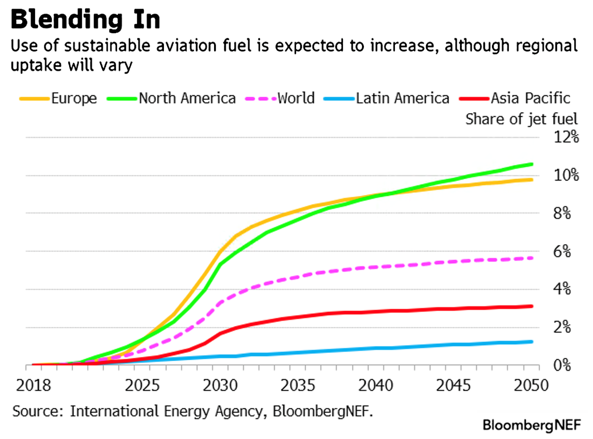 Still, this is “well short of industry targets, which lean heavily on SAF,” says Daisy Robinson, head of renewable fuels at BNEF. “For example, IATA is aiming for SAF to contribute to 65% of the industry’s emission reductions to get to net zero by 2050.”

Limited SAF adoption comes amid a significant price premium – SAF is two to four times more expensive than conventional jet fuel. Policy support is also lacking. “Those policies that do include SAF often favor road fuels, which means producers have a stronger incentive to produce road fuels like renewable diesel instead of renewable jet fuel,” says Robinson. “The availability of sustainable feedstocks could also hold back the industry, as the majority of planned capacity is focused on hydroprocessing oils and lipids, which are in relatively short supply.”

5. A hydrogen or electric future?

An increasing amount of capital is flowing to startups working on electric and hydrogen-powered aircraft, with funding from 2016 onwards having topped $400 million.

Kawahara sees the future of aviation involving a mix of both electric and hydrogen-powered planes. “Which system is adopted will depend on various factors, such as technology development, economics, airport infrastructure, the availability of clean electricity and fuels, and routes,” he says. 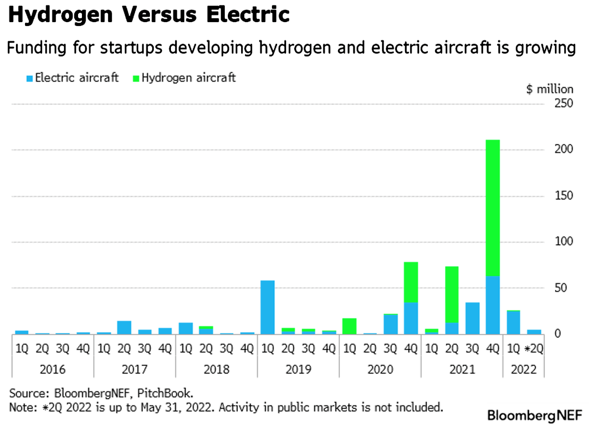 Widescale implementation is still likely some way off, especially as the technology is still being perfected.

“One of the main barriers for battery-electric aircraft is the low energy density per mass of batteries, limiting the range and payload of aircraft,” observes Kawahara. This is problematic seeing as almost 40% of carbon emissions from passenger aircraft come from flights longer than 4,000 kilometers.

For hydrogen, Kawahara points to the lower volumetric energy density versus conventional jet fuel. “This means the aircraft will need to carry large hydrogen tanks to fly the same distance as a conventional aircraft (assuming the same payload), implying that aircraft design changes may be necessary to make hydrogen-powered narrowbody and widebody aircraft a reality,” he says.

Adoption will also be slowed by the requirement to pass through rigorous safety certification processes, the long operating life of planes currently in service, and the need to replace both aircraft and associated infrastructure on the ground.

As startups chip away at the problem, getting new propulsion systems off the ground will likely hinge on the Airbus-Boeing duopoly making significant headway in this sphere.