While the world is looking to curb emissions and pivot to cleaner sources of energy, the use of coal, oil and gas won’t disappear overnight.

The transition to net zero now also faces an additional complication, with Russia’s invasion of Ukraine sending countries scrambling to secure alternative supplies of fossil fuels to shore up their energy security.

Oil prices are surging, competition for liquefied natural gas is heating up, and the pressures of the war are threatening a renaissance for the world’s dirtiest fossil fuel: coal.

Here are five charts from BloombergNEF looking at what comes next for fossil fuels.

Europe is taking center stage in the global LNG market in its quest to shift away from Russian gas. The region is expected to drive demand growth for the super-chilled fuel over the next five years, and is fast-tracking several LNG import projects to boost its capacity to receive deliveries. BNEF’s latest Market Outlook forecasts global LNG demand will rise by 69 million metric tons from 2021 to 2026, reaching 444 million tons, and Europe is estimated to account for 44 million tons of the increase. 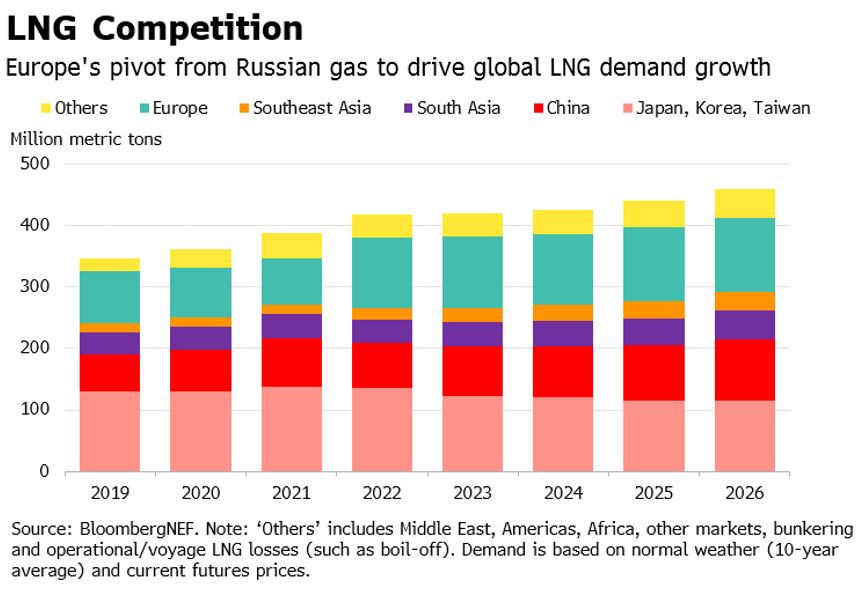 With Europe no longer acting as the LNG balancing market, global gas and LNG spot price dynamics are predicted to shift structurally in the coming years. US LNG netbacks for Europe’s benchmark Dutch Title Transfer Facility (TTF) will likely hold a premium over the Japan-Korea Marker (JKM) spot price to attract more LNG to Europe. Spot LNG prices will likely remain elevated compared to historical averages. High prices will weigh on gas demand growth outside of Europe, particularly in emerging markets in Asia.

2. US to leapfrog Qatar as world’s top LNG supplier

On the supply side, BNEF forecasts global LNG supply will expand by 19% over the next five years to 460 million tons. This reflects the ramp-up of new projects, offset slightly by declining output from ageing plants, particularly in Southeast Asia.

The US is set to overtake Qatar as the largest supplier with 113 million tons of output in 2026 – equivalent to a quarter of the global total. Calcasieu Pass, Golden Pass and recently green-lit Plaquemines are responsible for the bulk of new US projects slated to start by 2026. 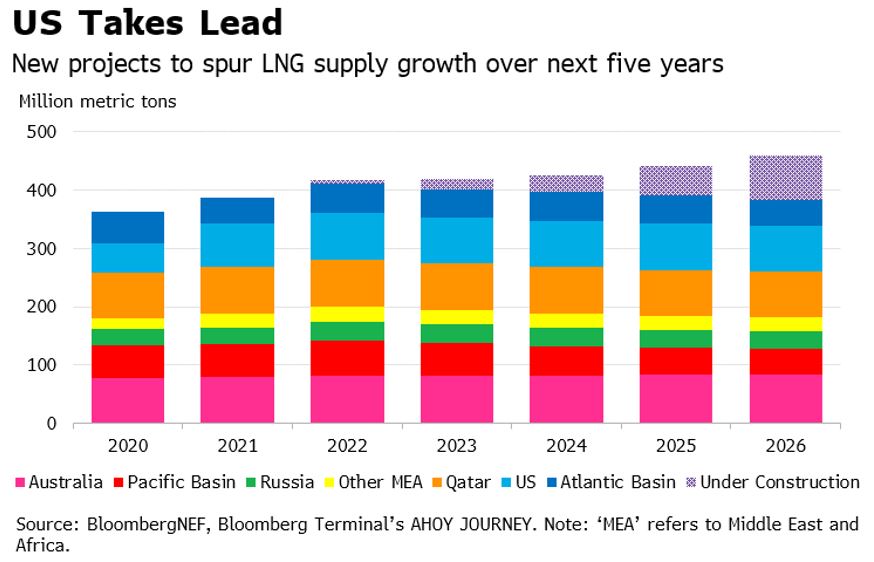 Sanctions on Russia’s under-construction projects are a risk to LNG supply growth, although this could potentially be countered by proposed plants elsewhere with modular designs and shorter build times. Despite new liquefaction projects being commissioned over the next five years, the LNG market is still expected to be tight until 2026.

Elevated liquefied natural gas prices in the wake of Russia’s invasion of Ukraine have pushed up demand for thermal coal for power generation across Asia and Europe. Combined with countries such as Japan looking for alternatives to Russian coal, and Australian exports being hit by logistics constraints, this has seen higher energy content thermal coal prices trade around record levels. 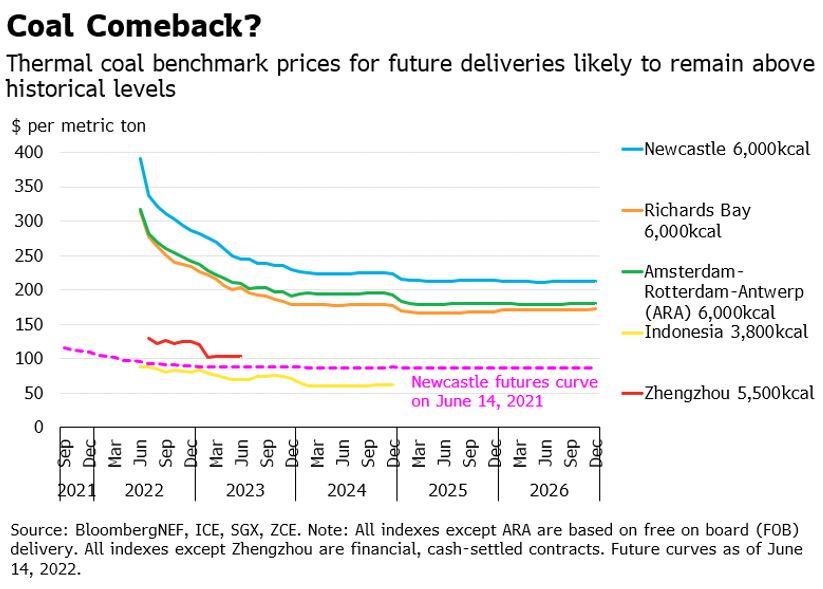 “Ironically, climate change – the problem that was partially created through years of burning coal – is also currently responsible for a significant rise in coal demand and disruption of its supply chain,” says Ali Asghar, a specialist in Asia Pacific power at BNEF. “Record high temperatures in India have shot up demand for coal in power generation, while an unusually wet autumn in Australia disrupted production and rail freight of coal.”

Higher grade Australian and South African thermal coal prices are likely to remain strong in June, driven by Asia replenishing stockpiles ahead of peak summer power demand. While prices are expected to steadily decline until the end of 2023, they are still set to trade well above historical levels. Newcastle coal deliveries for 2024 and 2025 are trading 2.5 times higher than they were in June 2021.

4. Big Oil to hike its spending

While coal prices are on track to ease somewhat, oil is primed to continue its upward march and could hit $150 a barrel in the third quarter of this year.

The surge in fossil fuel prices has translated to bumper profits for oil and gas majors and an increase in their planned capital expenditure. The world’s five largest international oil companies – Shell, TotalEnergies, BP, ExxonMobil and Chevron – are set to boost their collective annual capex by 28% in 2022 to $91.5 billion. 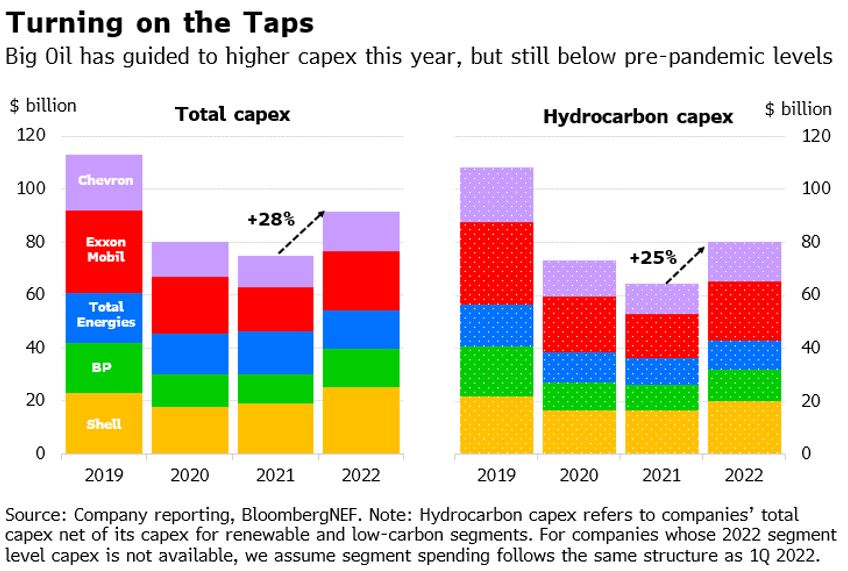 Even so, Big Oil’s guided capex is at the lower end of investment seen over the past decade. In the face of sky-high oil prices, focus is being maintained on shareholder returns rather than spending on new projects. The $80 billion of anticipated capex on hydrocarbons in 2022 is well below the $108 billion seen pre-pandemic.

Climate considerations are also playing a role in more tentative investment in fossil fuel production. As more capital is directed toward low-carbon activities, the jump in the five supermajors’ hydrocarbon-related spending this year is set to fall short of the overall growth in capex.

Demand for coal, oil and gas is set to persist over the next decades, meaning fossil fuels are expected to draw trillions of dollars of capital through to 2050. 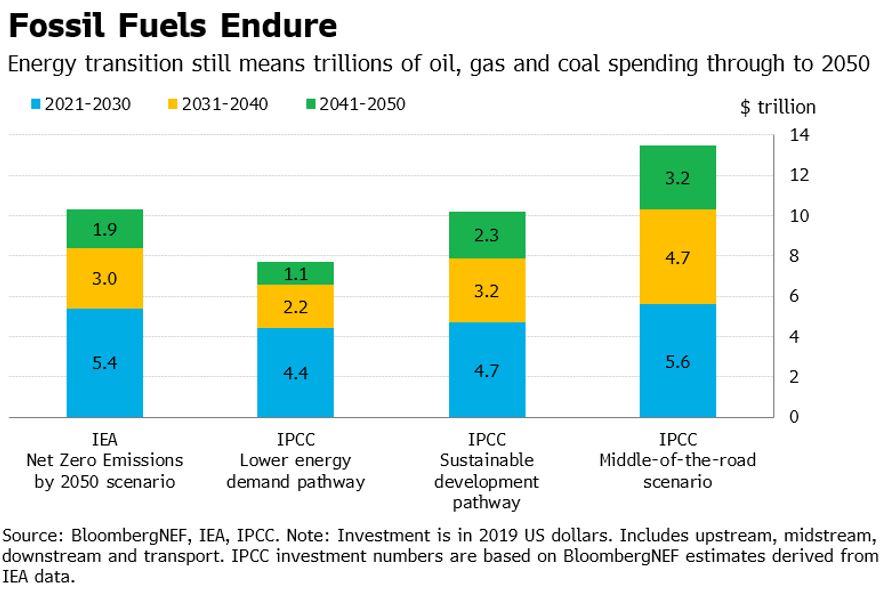 BNEF has analyzed four energy transition scenarios compatible with limiting global warming to 1.5 degrees Celsius above pre-industrial levels. Under the “middle-of-the-road” scenario devised by the UN Intergovernmental Panel on Climate Change – in which social, economic and technological trends do not shift markedly from historical patterns – $13.5 trillion could be spent on oil, gas and coal between 2021 and 2050.

Even if the world were to follow the “Net Zero Emissions by 2050” scenario outlined by the International Energy Agency – which assumes no new oil and gas exploration licenses are approved – there could still be $10.3 trillion deployed on fossil-fuel supply and infrastructure by mid-century.

The good news, at least, is that average annual investment in fossil fuels per decade drops across all four scenarios between now and 2050.