New renewable energy projects will exceed fossil fuel build-out for the first time in 2017, and in the years thereafter

London, Washington D.C. and Shanghai, November 28, 2017 – India will need to invest $23 billion over the next five years to meet its target for 2022 of 40GW of rooftop photovoltaics, according to a new report by Bloomberg New Energy Finance (BNEF).

India is accelerating development of renewable energy projects to provide cheap, reliable and clean power to its 1.3 billion people. The country’s per-capita on-grid electricity consumption increased by 22% over the four years ending March 2017 due to increased industrial activity, higher uptake of electrical appliances by residential electricity users and the addition of new consumers to the grid.

The majority of the capacity in the 2022 target – a total of 135GW – is utility-scale (wind farms and solar parks, in particular) and does not include large hydro projects. The report estimates that India will need to invest $83 billion to build this capacity. The good news is that, because of falling capital costs per MW, that figure is $19 billion less than in BNEF’s previous estimates.

But some of the most interesting activity will be in small-scale solar. Shantanu Jaiswal, head of India research at Bloomberg New Energy Finance, said: “Rooftop solar in India will grow inevitably with or without the support of power distribution utilities.”

The cost of electricity from rooftop PV has halved in the last five years due to fierce competition in the market and a drop in equipment prices. In contrast, average retail electricity rates have increased by 22% in the same period. This has made rooftop PV cheaper than commercial and industrial grid tariffs in all major states in India.

Bloomberg New Energy Finance expects residential sector PV growth to pick up rapidly post-2021. At the moment, its attractiveness is being held back by the high upfront capital expenditure that is necessary, by a shortage of financing options, and the fact that grid electricity is cheaper for residential consumers with low consumption.

Homeowners are usually drawing less power during the hours when their PV panels are producing, making self-consumption much harder. Solar projects also have a big and untapped potential to power irrigation pumps and reduce the use of back-up diesel generators.

Ashish Sethia, head of Asia-Pacific research at Bloomberg New Energy Finance, said: “Growth of rooftop solar presents an opportunity for the distribution companies to diversify and start their own businesses in that area rather than lose customers to other rooftop developers.” 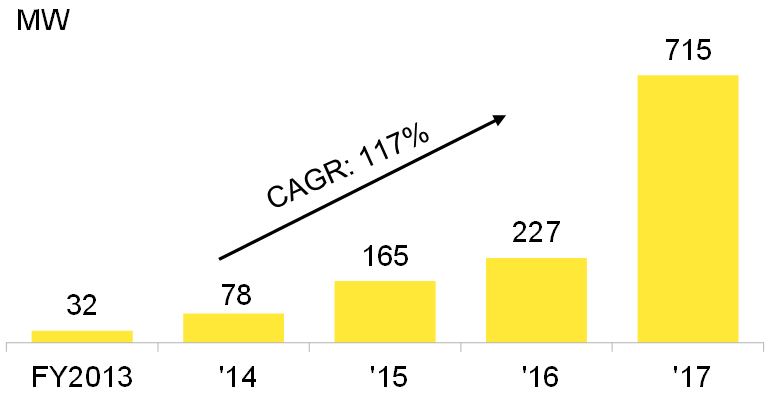 India is expected to install more renewable energy than fossil fuel power generation in 2017. Commissioned renewables projects amounted to 10GW through September, compared with 8GW for coal and gas

Efforts aimed at rural electrification have led to a significant increase in access to electricity over the last three years. However, quality and reliability of electric supply by distribution companies in rural areas remains poor. Despite that, off-grid companies have not been able to match the rapid growth of utility-scale renewables and rooftop solar systems.

India has a target of installing 10,000 rural micro-grids with a cumulative capacity of 500MW by 2021. The risk of stranded commissioned assets as a result of grid extension is the biggest concern for investors. That is impeding rapid build-out of small rural grids. Five states in India have released micro-grid policies and regulations in the last two years to promote investment and installations in this sector.

Off-grid power consumers who use solar lanterns and home systems are now moving to larger devices, leading to up-sell and cross-sell of various small solar products in areas poorly serviced by grid electricity. Micro-grid companies are also encouraging the use of productive load equipment like rice hullers, air coolers and refrigerators in their areas, helping to boost the rural economy.