Saudi Arabia Builds Cities in the Sand to Move Beyond Oil

After relying on oil to fuel its economy for more than half a century, Saudi Arabia is turning to its other abundant natural resource to take it beyond the oil age — desert. The kingdom is converting thousands of square kilometers of sand into new cities as it seeks to diversify away from crude, create jobs and boost investment.

In the past month alone, the world’s biggest oil exporter has announced two major developments — one covering an area bigger than Belgium and another almost the size of Moscow. That’s on top of plans to build a series of so-called economic cities — special zones in logistics, tourism, industry and finance, an entertainment city and a $10 billion financial district. 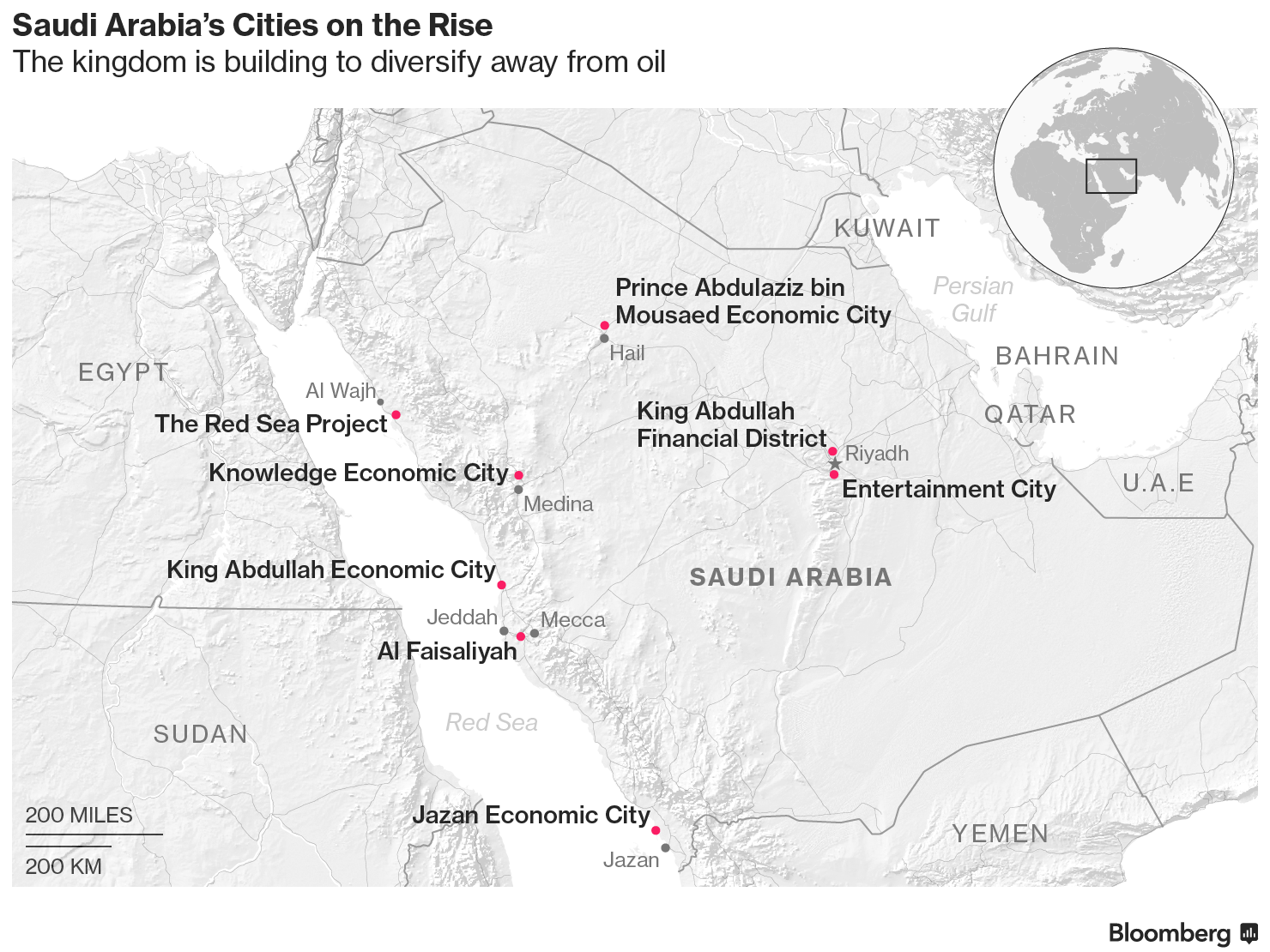 “The overall progress with the economic cities has been very slow, even before the collapse of the oil price,” said Monica Malik, chief economist at Abu Dhabi Commercial Bank PJSC. “Since then, the pace of development has moderated even further with a number of projects being placed on hold.”

When “Saudi Vision 2030” was announced last April, the 84-page blueprint said the government would work to “salvage” and “revamp” economic city projects executed over the past decade that “did not realize their potential.”

Here’s a look at some of Saudi Arabia’s most ambitious projects:

The kingdom last week announced plans to turn 50 islands and 34,000 square kilometers (13,127 square miles) — an area bigger than Belgium — along its Red Sea coastline into a global tourism destination. Located between the cities of Umluj and Al Wahj, the project aims to attract luxury travelers from around the world and will be developed by the Public Investment Fund, the country’s sovereign wealth fund. Construction is expected to start in 2019 and the first phase completed by 2022. The development cost of the project wasn’t given.

Visitors will have access to the ancient ruins at Mada’in Saleh, a relic of the same ancient civilization that built the city of Petra in Jordan. A promotional video for the project with dramatic music showcases white sand beaches and flocks of birds soaring over turquoise waves.

Bringing sun-seekers to Saudi beaches could transform a tourism industry that relies almost solely on Muslim pilgrims visiting holy shrines in Mecca and Medina. The country’s restrictions on alcohol and dress, however, could make it a hard sell for foreign tourists. The government will need to “get through the cultural and legal hurdles,” said Crispin Hawes, London-based managing director at Teneo Intelligence. “If you can’t change restrictions on alcohol and dress, that market effectively disappears.” 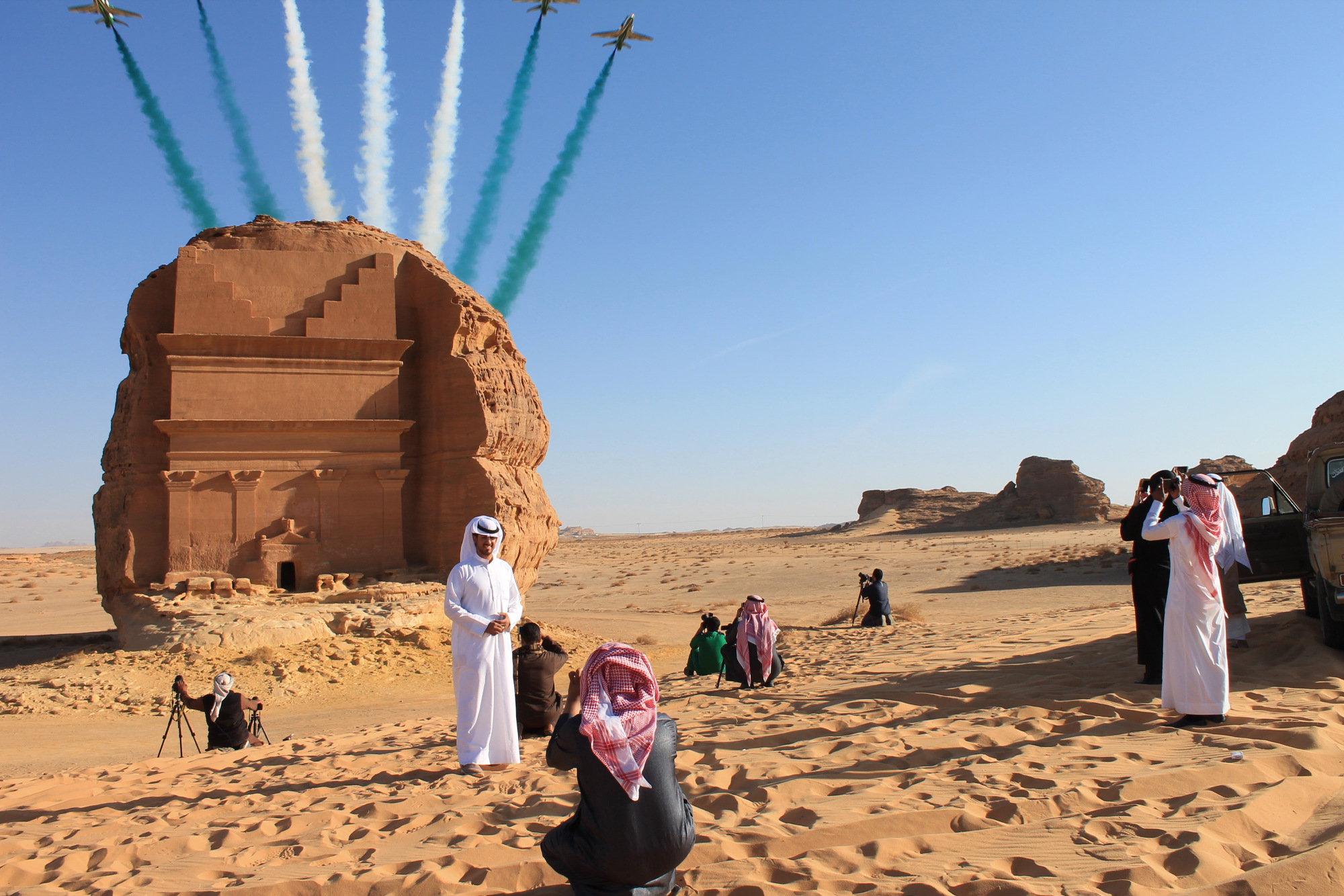 The kingdom announced detailed plans for the Al Faisaliyah project last month. Located to the west of Mecca, the city will have residential units, entertainment facilities, an airport and sea port. The project will cover 2,450 square kilometers — almost the size of Moscow — and is expected to be completed by 2050. The Makkah Region Development Authority is supervising the project and the PIF is also involved. An investment figure hasn’t been given.

Saudi Arabia in April announced plans to develop the kingdom’s largest cultural, sports and entertainment city in Al Qidiya, southwest of Riyadh. The project will be developed on 334 square kilometers and will include a safari area and a Six Flags Entertainment Corp. theme park. The country’s sovereign fund is the main investor, along with local and international investors. Construction is due to start next year and the first phase should be completed by 2022. An investment figure was not given.

As part of plans to overhaul its economy, the government is relaxing the rules on entertainment in the ultra-conservative society. Concerts, dance shows and film screenings have drawn thousands of people over the past year. By 2030, the kingdom aims to double household spending on recreation to 6 percent.

“While the current authorities seem to be committed to open up the country to forms of entertainment previously banned, a big test will be the reaction of the more conservative parts of the Saudi society which have already shown great reservations toward the newly founded Entertainment Authority as reflected through social media widespread criticisms,” said Philippe Dauba-Pantanacce, a London-based senior economist and geopolitical strategist at Standard Chartered Bank.

KAEC, named after the former head of state, is the kingdom’s first freehold city and is being developed by Emaar Economic City, a company controlled by the Saudi government and Dubai’s biggest property developer Emaar Properties PJSC. Covering about the same area as Brussels, the project has attracted $7.9 billion of investment and secured enough cash and credit to fund its planned spending for the next decade, according to KAEC. The project includes a deep-sea port, a 55 square-kilometer logistics hub, a sports and recreation center and more than 6,500 residential properties.

KAFD, as it’s known, was envisaged as Saudi Arabia’s answer to the Dubai International Financial Centre, bringing banks, financial-services firms, auditors and lawyers, as well as the kingdom’s stock exchange and capital-market authority into one area. The project, north of Riyadh, has been slowed by construction delays since work began in 2006 and is more than 70 percent complete. As of last April, not a single financial institution had agreed to take space in the 73 buildings the state is constructing, said Waleed Aleisa, chief executive officer and project manager of the district at developer Al Ra’idah.

The 1.6 square-kilometer district is owned by the Saudi Public Pension Agency and the government is looking at ways to lure banks with incentives that could include tax breaks lasting a decade or more, as well as separate regulation that makes it easier to hire and issue work visas, Aleisa said. Five buildings at the district’s core will be surrounded by dozens of offices, apartments, hotels, conference centers and entertainment venues. On the ground, walkways below street level branch out to connect buildings and provide space that’s 8 degrees Celsius cooler than street level.

Saudi Arabia’s first so-called smart city development, the city in Medina will focus on intellectual property, knowledge-based industries, medical, hospitality, tourism and multi-media. It will also have serviced apartments, a hotel and conference facilities, according to the Economic Cities Authority website. Residents of the city, which will cover 4.8 square kilometers, will have access to Mecca and Jeddah via the Haramain High Speed Railway. KEC was listed on the Saudi stock exchange in 2010 after raising about $270 million.

This is a mixed-use development located on 156 square kilometers of land in Hail in the north of the kingdom. As well as a residential area, the city will also have an international airport, hotels, shopping centers and entertainment venues.