U.S. shale is coming perilously close to puncturing its own rally.

Just months after predicting double-digit production increases, largely based on crude prices sitting between $55 and $60 a barrel, drillers are suddenly contemplating the possibility of retrenchment as a stubborn global supply glut is keeping prices near $46.

It’s a reversal that could accomplish what OPEC and other global producers have failed to do this year: slow down America’s booming shale industry. Analysts and company officials say a drop to $40 a barrel could halt rig growth for smaller drillers in less active U.S. shale basins, and undercut efforts by fracking service providers such as Halliburton Co., FTS International and Patterson-UTI Energy Inc. to raise their fees.

“The growth outlooks proposed by many oily E&Ps appear tenuous at best and not resilient to prolonged weak oil prices,” Mizuho Securities USA analysts Timothy Rezvan and James Lizzul wrote in a June 11 note. They cited rising service costs and the industry’s lack of hedging protection for next year.

West Intermediate Texas crude, the U.S. benchmark, tumbled as far as $44.54 a barrel in New York trading Wednesday, its lowest level in five weeks after the U.S. government reported gasoline and other petroleum product stockpiles swelled last month. WTI has fallen 19 percent this year from its peak of $55.24 on Jan. 3.

Oil company stocks followed suit, with the Bloomberg Intelligence Independent E&Ps index, which tracks 56 mostly shale-focused drillers, dropping 4.6 percent at 11 a.m. in New York. The index was already down 21 percent for the year through Tuesday.

Drillers at an RBC Capital Markets energy conference in New York last week insisted they were sticking with their spending plans, noting they’d emerged from last year’s oil-market slump with leaner costs and lower debt levels. But they acknowledged the shakier ground their budgets stand on.

Messages seeking comment from EOG weren’t immediately returned on Tuesday. Reba Reid, a spokeswoman for Noble, confirmed the content of the RBC note.

Wednesday’s data on rising U.S. inventories followed a similar report from the American Petroleum Institute a day earlier showing a bump in crude oil stockpiles. The Paris-based International Energy Agency, meanwhile, forecast that new production from the U.S. and other non-OPEC sources will exceed demand growth next year.

That’s if U.S. growth can keep up the pace. A $45 barrel “slows most U.S. shale plays,” UBS AG analysts led by William Featherston wrote in a June 9 note. At $40, companies will “hit the brakes” on growth even in the Permian, the prolific oil play in West Texas and New Mexico, the analysts predicted.

Oil has been mired below $50 a barrel by concerns that growing U.S. supplies are overwhelming production cuts by the Organization of Petroleum Exporting Countries and its allies. The U.S. oil rig count is at its highest level since April 2015. Last week, the U.S. Energy Department forecast national crude production would hit a record 10 million barrels a day next year.

While the U.S. data released Wednesday showed a drop in crude stockpiles, totals for gasoline and other petroleum products gained at a time of year when they’re expected to decline said John Kilduff, a partner at Again Capital LLC, a New York-based hedge fund, in a telephone interview.

“It’s really counter to what we should be seeing this time of year,” he said.

The gasoline build is especially concerning in combination with demand, which also fell last week, according to Kilduff. “We’re just not getting good numbers,” he said. Even if the data improves going forward, it “will be too little too late.” 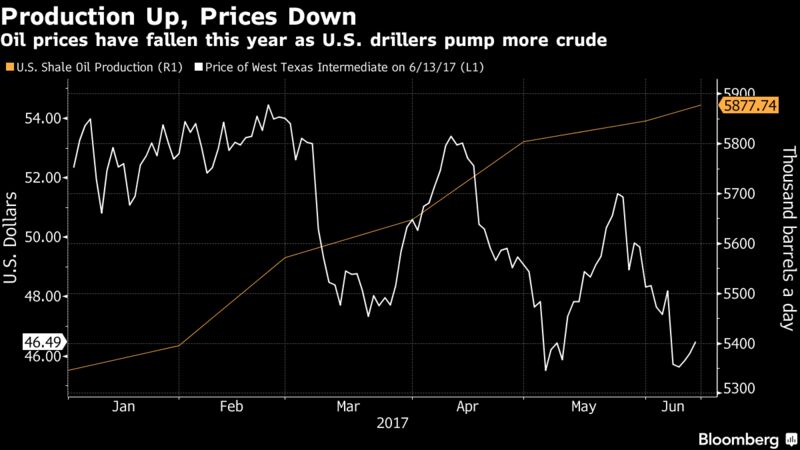 Smaller oil companies in less active U.S. shale basins would be the first to scale back at $40 a barrel, said James Williams, president at WTRG Economics, an Arkansas-based energy consultant. That includes closely held companies with less capital and anyone not among the top 15 or 20 U.S. producers.

“The Permian keeps going,” Williams said, referring to the most active shale basin . “It doesn’t collapse, but I don’t think at $40 it grows.”

Fracking service providers may be the hardest hit if explorers borrow a tactic from last year’s slump. The drillers could look to save money by doing the initial drilling but not the final frack jobs that complete wells, Williams said.

Oil and gas companies should consider cutting their growth forecasts now but probably won’t, said Mizuho’s Rezvan and Lizzul. With new drilling rigs in place, 2017 production is largely locked in, they wrote, though companies may discuss possible reductions to 2018 estimates when they report second-quarter earnings.

Below $45, wells in the Bakken shale play, gassier parts of the Eagle Ford play and the Niobrara in the Rocky Mountains all fall below breakeven prices, the UBS analysts said in their note. Under $40, the SCOOP play in Oklahoma and even the Delaware Bone Spring and Midland Wolfcamp formations in the Permian start losing money, the analysts wrote.

While companies could look to issue more shares to fund drilling budgets, as they did in 2015 and 2016, “we believe disgruntled energy investors will be less willing to re-equitize E&Ps given the frustrating pursuit of growth at the expense of returns.”

The slide in oil prices has raised questions about production beyond U.S. shale as well. Cenovus Energy Inc., which doubled down on the Canadian oil sands with a $13.2 billion purchase from ConocoPhillips in March, has assured investors since then that it can pay for its dividend and sustaining capital with WTI at $45 a barrel.

The Calgary-based company said in late April that it had 87,500 barrels a day of crude oil hedges at an average minimum price of $49.20 a barrel in place for the remainder of the year, and 50,000 barrels per day hedged at $49.74 for the first half of next year. Cenovus declined to comment further.