The shale surge that’s tied down global oil prices showed no signs of abating on Tuesday, as four of the biggest U.S. drillers said they’re not backing away from lofty production targets for 2017.

In second-quarter earnings reports, EOG Resources Inc., Devon Energy Corp., Newfield Exploration Co. and Diamondback Energy Inc. all outlined goals that would help push U.S. output toward a record 10 million barrels a day next year. Even Pioneer Natural Resources Co., which trimmed the top end of its forecast due to delays in the Permian shale basin, still expects to increase oil and natural gas volumes by 16 percent at year’s end.

The reports suggest staying power for a supply glut that’s kept world oil prices on a roller-coaster ride this year, even as OPEC nations vowed to reduce output. The optimism from the U.S. shale fields followed quarterly reports last week that showed major international producers including Exxon Mobil Corp. and Royal Dutch Shell Plc are also learning to make money at $50 a barrel, less than half the peak that crude reached three years ago.

“In the best parts of the basins, shale is here to stay,” said Rob Thummel, managing director at Tortoise Capital Advisors LLC in Leawood, Kansas, which manages $16 billion in energy-related assets. “Shale production is going up. It’s not a matter of if; it’s just a matter of how much.”

More worrisome perhaps for oil bulls, the U.S. drillers said they’re getting more efficient, allowing them to raise production goals without boosting spending. All five companies either cut or left flat their capital budgets for the full year. 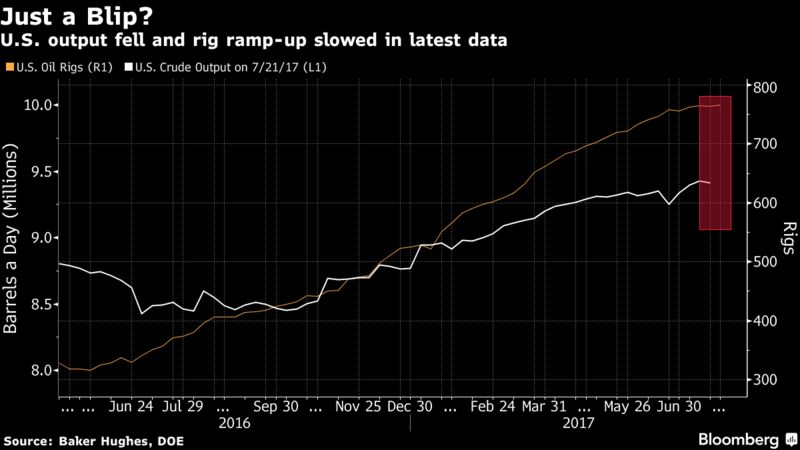 “With our ability to deliver attractive returns in this environment, our top strategic priorities are to maintain operational momentum” in the U.S., Devon Chief Executive Officer Dave Hager said in a statement. The Oklahoma City-based explorer said its U.S. oil production will end the year as much as 23 percent higher than in the fourth quarter of 2016.

EOG CEO Bill Thomas touted the company’s use of technological advances to reap “high returns at relatively low oil prices.” As a result, the Houston company has been able to lift output purely on the strength of cash flow, rather than having to borrow money, he said.

Futures for West Texas Intermediate crude closed 2 percent lower in New York on Tuesday, after the U.S. benchmark made a short-lived run above $50. The move came as rising production in Libya led to an overall increase in OPEC output last month. Investors’ attention now turns to data on U.S. inventories, scheduled to be released on Wednesday.

Crude stockpiles climbed by 1.78 million barrels last week in an American Petroleum Institute report released Tuesday, according to people familiar with the data. That would be the first increase for crude since the end of June when compared with U.S. Energy Information Administration data.

Lower oil prices may still temper drillers’ plans, said Tortoise Capital’s Thummel. He cited the capital budget cuts by Pioneer and other producers as well as the U.S. Energy Department’s decision last month to cut its estimate for full-year production. Lower oil prices mean the industry will have less protection from hedging contracts in 2018, Thummel said.

“$50 a barrel is still a pretty critical number and that number is going to be even more critical as we move into next year,” he said.