India added 1.1 gigawatts of onshore wind projects in 2020 – the slowest pace of new build in a decade. Amid the slowdown Siemens Gamesa retained its position as market leader, accounting for nearly half of all the new capacity commissioned, with GE ranking second. Local turbine makers lost ground against global rivals, with Inox and Suzlon together supplying 23% of new projects.

Turbine makers faced unfavorable winds in 2020, according to Atin Jain, associate at BloombergNEF. All major manufacturers were under stress because of challenging market conditions brought on by the Covid-19 pandemic, he said. Siemens Gamesa changed its local leadership and is restructuring its India business, while Suzlon is grappling with financial and operational challenges despite completing its third debt restructuring. Other manufacturers had a difficult year as well.

While 2020 was the most challenging year for the Indian wind power sector in the past 15, the industry is set to get back on track. BloombergNEF expects 3.2 gigawatts of new wind capacity to be added in 2021, three-times the capacity added in 2020, according to Shantanu Jaiswal, head of India research at BloombergNEF. 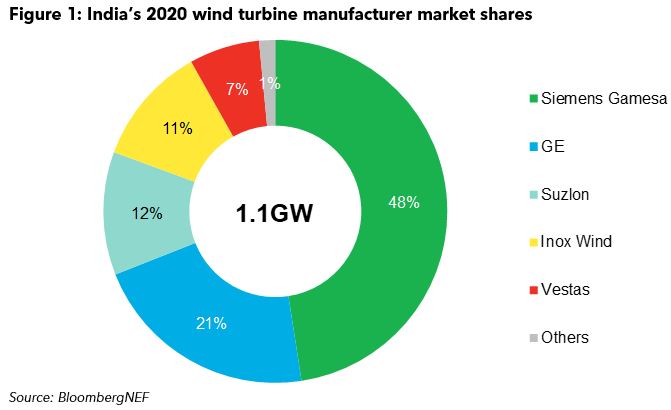 The Covid-19 pandemic resulted in nation-wide lockdowns in 2020 and caused severe disruptions to the supply chain and movement of goods and people, delaying project execution. The government granted developers a five-month extension to commission renewable energy projects that suffered construction delays. Commissioning of about 2 gigawatts of wind farms due to come online last year slipped into 2021.

Four major independent power producers, or IPPs, Renew Power, Sembcorp Green Infra, Alfanar and Adani Green Energy, accounted for 70% of the total installed capacity in 2020. All of their projects were in the western state of Gujarat, and they were winners in the Solar Energy Corp. of India’s (SECI) tranche II and III wind auctions, which were held in 2017-18.

Foreign turbine makers supplied 76% of all capacity commissioned last year, up 9 percentage points from 2019. Siemens Gamesa consolidated its top spot in the manufacturer ranking, and supplied nearly half of all projects commissioned last year. GE ranked second, accounting for over one-fifth of all installations.

IPPs commissioned 883 megawatts in Gujarat, located in the western region of India, or 79% of all new build across the country. Higher wind speeds and land availability have made Gujarat a favored state for most IPPs. The next largest regions for new onshore wind build were Tamil Nadu (128MW), Karnataka (82MW) and Rajasthan (26MW). Despite moderate to high wind speeds, no developers commissioned new projects in Maharashtra, Madhya Pradesh and Andhra Pradesh. 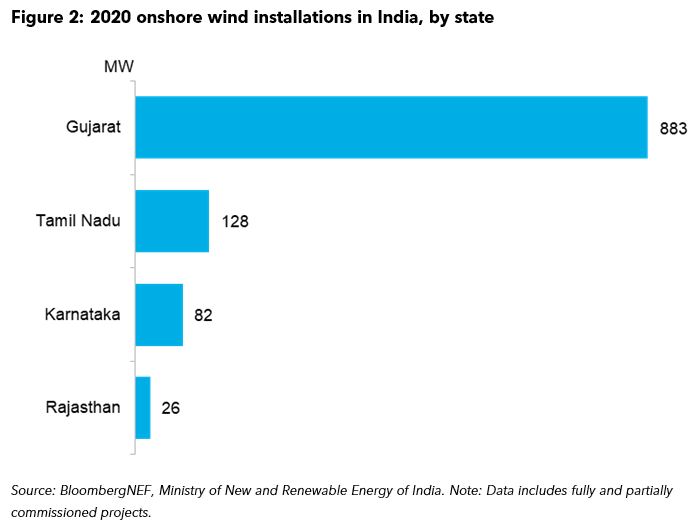